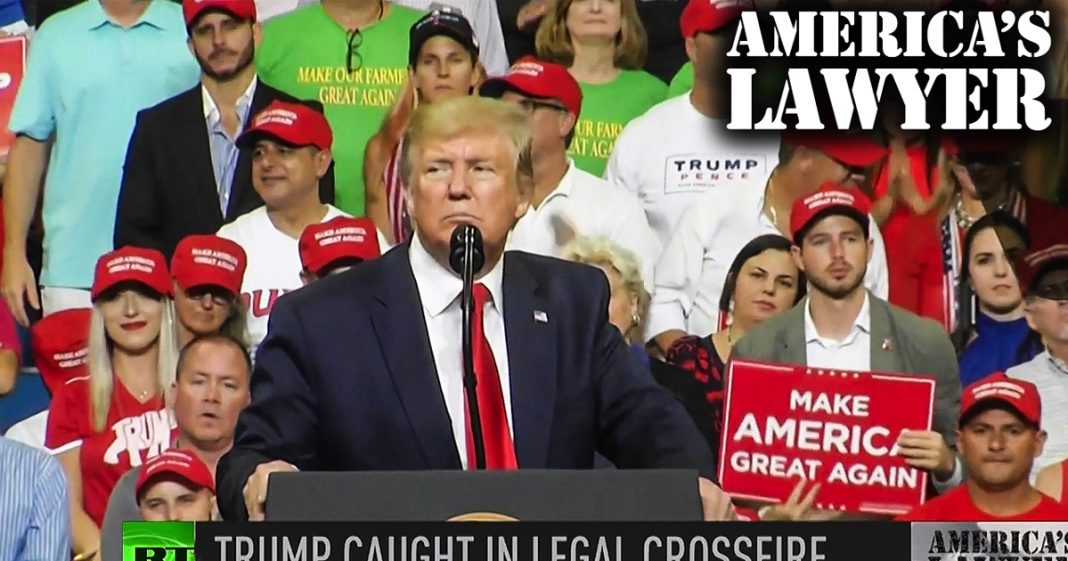 Via America’s Lawyer: Trial Magazines Editor Farron Cousins and legal & media analyst Lionel discuss a pair of lawsuits that President Trump is currently embroiled in. Trump and his family are facing complaints of their previous investments in a multi-level marketing company called ACN, which exploited customers under the guise of offering telecomm services. Meanwhile, the President is filing suit against democrats over their continued push for Trump to release his tax returns. Farron Cousins fills in for Mike Papantonio on this episode of America’s Lawyer.

Farron Cousins:                  President Trump is currently involved in multiple different lawsuits. Some as the plaintiffs, some as the defendant. Some of these cases could have consequences for the presidency while others are pretty much a little less consequential. So let’s sort through what matters and what doesn’t. And to help me with this task, I have attorney and analyst Lionel to tell us what’s happening. Lionel, thank you very much for being here. We’ve, we’ve got a couple of different lawsuits to talk about and some other things I want to ask you your opinion on here, but let’s start with a, a case that really has no effect on the presidency. We’ve got this New York case involving American Communications Network. Can you tell us about this one, this ACN case that’s happening right now up in New York?

Lionel:                                      I read the complaint, I sound like judge Wapner, I read it and I’m wondering, let me ask you a question. What are video phones? What is this, Dick Tracy? There’s multilevel management. This is embarrassing. If anything what, what is this? Is this like a modified Amway? I mean, I read it and it sounds like he apparently, he and his family put their name behind video phones for $25,000 and a new car. What the hell is a video phone? What is this? I don’t even know what it is. So I, I mean, I’m sure that the plaintiffs are very, they don’t take kindly to me laughing at it. I don’t think this is going to bring down the presidency as you so correctly, positioned. So it remains to be seen. I predict eventually arbitration the case will go bye-bye. Not exactly Bernie Madoff in my humble opinion.

Farron Cousins:                  Right. I, I, you know, I mean look, we’re looking, they have, they endorsed this, this product, as you pointed out, video phones. And it’s also important to say though they endorsed this thing, these video phones. Smartphones existed at the time. We had things like Skype. We had Facetime. This, this was not technology that was far off in the future, video phones already when this, when these people were investing were so outdated. But so, you know, maybe, maybe these investors have a case, maybe they don’t. I don’t know exactly. I mean, do, can you just by endorsing it, are you liable for their investments? So, so that’s a, that’s a big question here, isn’t it?

Farron Cousins:                  Well, you know, there’s another case out there. This one’s gained a lot of attention, much you know, more headlines. And that’s the lawsuit that Trump has actually filed. He’s the plaintiff in this one, trying to prevent his tax returns in the state of New York from going to Congress. So what’s happening with this one? You know, the, this, this seems like this one could have consequences for really either party depending on how it goes.

So I don’t know what it’s supposed to say even at it’s juiciest. But according to what some people say, everybody is, I think Bob Dole gave like 50 years of tax returns. I mean other people have. Mitt Romney has. So something tells me he will be turning in something. And of course Rachel Maddow will have a 12 part series as she did the first time she tempted us on her MSDNC show. And I was, that was even more riveting than the video phone litigation. I promise you. Believe, believe me, that one. So that remains to be seen as we see.

Farron Cousins:                  Yeah. And that, that is a really good point. You know the, the tax returns that we’re talking about here, these are basically like the typical like 22 line tax returns that, what everybody in this country files. You, there’s no dirt necessarily in that. So it is weird that he’s fighting it so much. Like if you want to see these few lines, go ahead, like, take it, whatever. But the fight of it is really what’s drawing people in. Hell, maybe that’s actually part of the appeal.