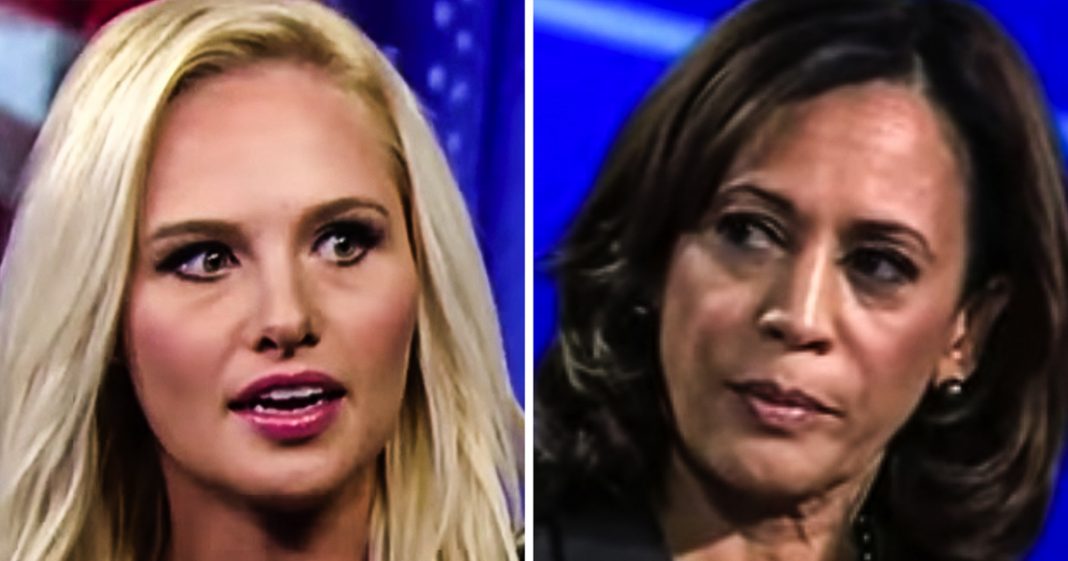 Fox News personality Tomi Lahren finally crossed a line that even her fellow Fox News hosts wouldn’t cross when she suggested on Wednesday evening that Senator Kamala Harris slept her way to the top. Her fellow women at Fox lashed at Tomi for bashing another woman in this manner, and after pressure from the rest of the network, Lahren issued a half-hearted apology on Twitter. Ring of Fire’s Farron Cousins discusses this.

On Wednesday evening, Fox News, talking head. Tomi Lahren was watching the democratic debate and she had something interesting, I guess you would call it to say about Kamala Harris during the debate. Tomi Lahren tweeted out the following, she said,

“Kamala, did you fight for ideals or did you sleep your way to the top with Willie Brown?”

That little statement, that little jab at Kamala damn near costs, Tomi Lahren her job because immediately after she tweeted out this ridiculous Republican conspiracy theory about Kamala Harris, even the women on Fox News who are about as far to the right as you can get came out against Tomi asking her. One of them, Fox News’ Kat Timpf asks,

“I am curious to know what you think bringing a woman’s personal/sexual life into this accomplishes. Men do that to us enough as it is. I’m honestly asking.”

Several other women on the network also tweeted at Tomi Lahren asking her, why in the hell do you think this is a smart or good thing to do? It is sexist. It is disgusting, but I don’t know that any of them actually pointed out that, yeah, this isn’t true. It’s just a little conspiracy theory that Tomi Lahren likes to push, but in response to this backlash from people at the network, Tomi was forced to come out on Thursday and tweet out the following.

“I apologize for my comment on Kamala’s personal relationship. It was the wrong choice of words. There are many other things to take her to task for and I will stick to those.”

That may actually be the most pathetic and ridiculous apology I think I’ve ever seen. Wrong choice of words. How about wrong choice of thought? Tomi, you ever think about that? Probably not because I don’t know that you actually even think. You just have random things that come spewing out of your disgusting hate-filled mouth and you say, well, whatever, it’s going to get me some coverage. It’s going to get people talking about me because that’s all I want are the eyeballs. Doesn’t matter if they love me or hate me. I just want to be famous so bad.

That’s what you’re all about, Tomi. That’s what this is. You want to be famous. You want to be the outrage queen. You want to be the next day and Coulter and you’re on your way to doing it. But I got to tell you, that’s probably not a life most people in this country are in envious of. But that is exactly where you’re headed. Eventually, your usefulness is going to run out on Fox News, just like Ann Coulter’s did. She used to be on Dang near every day. Now, every couple of weeks maybe. Yeah, she’s got some bestselling books, but Ann Coulter knows how to string a sentence together. Tell me you don’t even have that ability. So best of luck being the great value brand of Ann Coulter, cause I promise you it’s not going to work out for you the way you think it will.