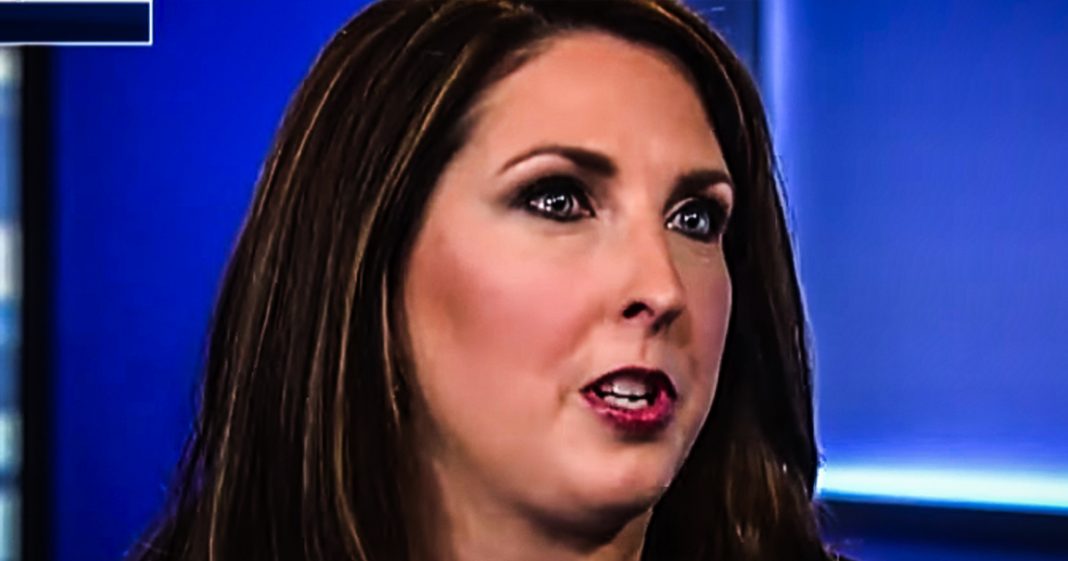 During an RNC meeting this week, GOP Chairwoman Ronna McDaniel became “choked up” after defending herself from allegations that she is personally profiting off a new fundraising system that the Party has put in place. It is unclear if the Party believes her, just as it isn’t clear that McDaniel is pulling in extra cash on the side, but what is clear is that the new procedures and companies being used are linked to a former Trump staffer as well as the Kushner family. Ring of Fire’s Farron Cousins discusses this.

For the last two days and all through the rest of the day. Today, the RNC and their officials are meeting in Charlotte, North Carolina for a little three day chat about fundraising. And this event kicked off on Wednesday, you know, closed door meeting and it began with GOP chairwoman Ronna Romney McDaniel, almost breaking into tears, defending herself from accusations from these other RNC officials that she is profiting from the new, uh, donor system that the Republican Party has chosen to use. That donor system is called WinRed a much like the democratic system is ActBlue. Now the reason that the Republicans have decided to go with this new WinRed donor system where all the candidates, we’ll get into this one system. It has a list of all the people who’ve given money. They can reach out to them if they’re in their state or if they’re running for a national election, whatever it is.

This is basically the big donor database, just like ActBlue is for the Democrats. It’s a way to reach out to the small donors to target them. And after the shellacking, the Republican’s token, the 2018 midterms, they realized they needed something to counteract the Democrats ActBlue. And they said, hey, here’s this WinRed thing. Donald Trump is endorsing it like crazy. Let’s go with this. And when McDaniel decided, okay, yeah, let’s go with this. It raised some eyebrows because Republicans already had a couple other systems in place that did the same thing WinRed was not as effective, did not have as big of a database. So why would we go to something that’s smaller, that’s less efficient, and we don’t even know if it works yet. But Ronna said, nope, we’re going to do it. So it immediately sparked fears among RNC officials that Ronna McDaniel was somehow profiting off of it. And I’m going to say this.

And I hate to have to say this, but after I read this original article here on Politico, I did a search for it because I wanted to find out, well, why do they think she’s on the take? You know, why do they think she’s profiting from this? I couldn’t find anything. It’s just accusations. So far from what I was able to find. Then if you, honestly, if you have an article or something that talks about this, please do send it to me. You send it to me on Twitter, whatever. But I, cause I want to see it because I have no doubt that that’s probably what’s happening. I just need to see the evidence before I can actually say that. But folks, I couldn’t find evidence to suggest or any article linking her to WinRed or any of the companies that WinRed contracts to run these donations. So it’s a little bit confusing here as to why she is being accused of these things when people aren’t out there making the connections. Again, I’m, I’m sure they exist. Republicans are corrupt to the core, but you got to come with a little bit of evidence. And again, Ronna was defending herself at the beginning of this meeting and according to those in attendance, she got choked up.

She, she almost a, you know, started crying because people had been accusing her of this. But here’s something that I did find in my research, something that did not show up in this political article is that there are people who are profiting off of the use of WinRed, because, and this might seem a little complicated, so bear with me for a second. Whenever you donate to an online campaign, your credit card has to be processed, your debit card, whatever it is, has to be processed, right. You know the, the DNC doesn’t do the processing. The RNC doesn’t do the processing for their, WinRed ActBlue, they don’t do the processing. You have to contract that out to a third party company. Companies like stripe for example, they get a cut of it then. So if you give a $25 donation to WinRed, only $20 of that is actually going to the RNC. $5 is going to the processing company like stripe. Cause that’s who, WinRed uses.

You know who’s invested roughly $30 million into stripe? Oh that would be Jared Kushner. His brother invested 30 millions, a 30 million into this company back in 2014 so, so he’s got a big financial holding in that along with a, what is it called? Thrive capital is the name of his company. So the cushions are making money off of this, you know, who else is making money off of it? Man by the name of Gerrit Lansing who uh, owns a firm that is profiting off this as well. He is

“…A former RNC staffer who left his White House job only three weeks into the administration after reportedly failing his FBI background screening.”

So we do know that people close to this administration and even former members of this administration are profiting off WinRed, which is likely why Donald Trump was pushing it so hard before anybody had even heard of it. But Ronna McDaniel, I’m waiting on the evidence of that. I’m sure it is out there and if anyone can find it, do not hesitate to send it to us here at ring of fire because I definitely want to see it so that we can definitely report on it.