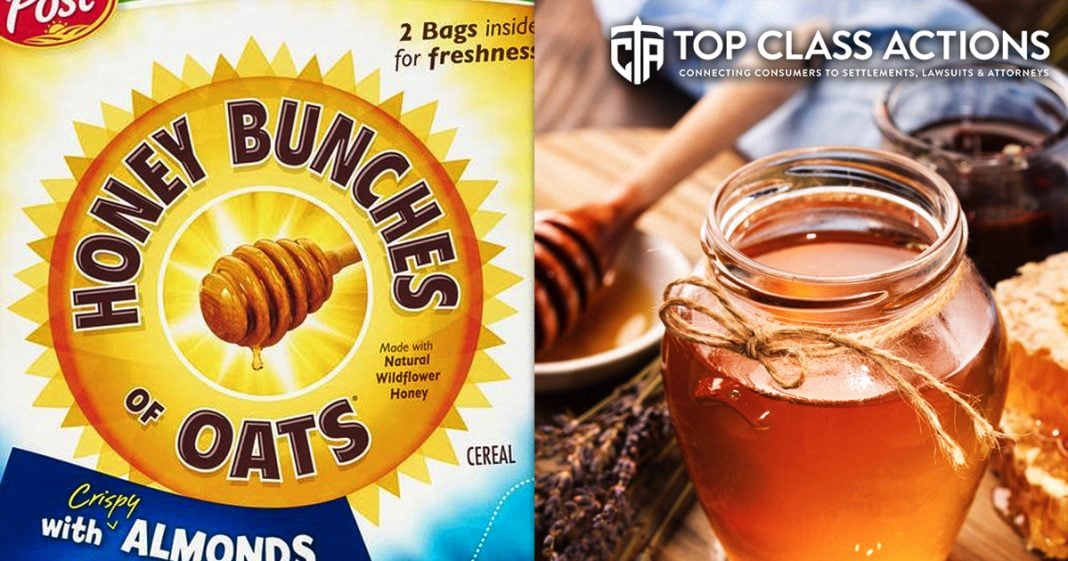 A class action lawsuit claims that Post intentionally misleads consumers into believing that its Honey Bunches of Oats cereals are sweetened with honey when the majority of the sweetness comes from other sources. Honey Bunches of Oats, a popular cereal manufactured by Post Consumer Brands, allegedly takes advantage of honey’s reputation in their marketing. The name itself hints at honey content in the product and marketing for the cereal reportedly uses a honey dipper covered in honey and bee imagery to reinforce the association. Despite the prominent honey imagery which hints that honey is the primary sweetener in the cereal, Honey Bunches of Oats primarily uses other sweeteners according to the class action lawsuit. Ring of Fire’s Farron Cousins discusses this with Scott Hardy, President of Top Class Actions.

Farron Cousins:                  You know, we see cereal commercials all the time. One of the most popular ones on television right now, Honey Bunches of Oats, the friendly factory workers talking about how great it is, where they’re working, everything is wonderful. The cereal is phenomenal, except according to a new class action lawsuit, the cereal may not be all that those smiling faces on TV are making it out to be. Joining me now to explain what’s happening is Scott Hardy with Top Class Actions.

Scott, Honey Bunches of Oats, manufactured by Post big honeycomb, or not honeycomb, a honey ladle, I guess on the box dripping with honey. There’s honey in the name, but it’s just sweetened with actual sugar instead of honey according to this new lawsuit.

Scott Hardy:                          Exactly. You know, you’ve got Post that’s, that’s putting out these great commercials and they’ve got the honey dipper sitting there waiting for you and it’s just sitting there dripping and you’re, all you think is that these workers you see are just taking this little dollop of honey and pouring it over your cereal and that’s magically making it so amazingly tasting and sweet. You’re not imagining that honey is actually the least amount type of sweetener used.

In fact, they’re using other sweeteners like sugar, brown sugar, corn syrup, malted barley syrup and molasses to sweeten that, that, that cereal. Now, do they use honey? Yeah, it does, it looks like they do use honey. But all of those ingredients actually take precedence over honey. But you know, saying that it is corn syrup, sugar, brown sugar, malted barley syrup oats, doesn’t really sell as well.

Farron Cousins:                  Well, and the issue here is, you know, it’s not just, oh, there’s not as much honey as we think. This is awful. People buy this cereal thinking that it’s sweetened with honey, because especially, you know, if you have any kind of a type two diabetes, for example. If you’re trying to take care of yourself, if you’re trying to cut down on refined sugars, there is a big difference between honey and all the other different types of sweeteners you just mentioned. Those do different kinds of things to the body, especially when you’re dealing with somebody who is diabetic.

So this is a big deal. This is not just, oh well who cares if it’s sugar or honey, just give me the dang cereal. No, it makes a big difference for people who are trying to take care of themselves. If they have health issues, this can be a real factor in their health going forward. And that’s why this is, this is a big deal and that’s why we do have these class actions about these particular issues.

Scott Hardy:                          Exactly. People are, people are buying more products with honey because they think about the antioxidants and the things in honey that makes it healthier. And that having honey using honey as a sweetener is better for you than just using straight sugar. But unfortunately, according to this class action, it’s just not helpful. And that really kind of leads into the other class action that we were discussing where Post was trying to get the added sugar class action, the, the claims that it is healthy, dismissed. And so essentially Post is saying, hey, we’ve got a healthy product.

All of these cereals are healthy. You can’t tell us they’re not because they were sued because of the high sugar content. And these cereals are cereals that you would think are healthy. Those are Raisin Bran, Bran Flakes, Post Selects/Great Grains cereals, Honey Bunches of Oats, Post Good Mornings, Post Shredded Wheat, and others that people will buy thinking that they are healthy cereals, cereals. Post is marketing them as healthy, healthy cereals. But in fact they are just loaded with sugar, which of course makes them not so good for you.

Farron Cousins:                  Right. I mean it’s not like we’re talking about the, the cereals packed with you know, marshmallows and bits of cookie and, and all of that. These are actually cereals people eat like I’m going to lose weight so I’m going to, I’m going to eat this thing and you know, it’s high in fiber. Maybe it’s got a lot of vitamins. Well, keep looking at that little label on the side because it’s also going to tell you that these things are packed with sugar. And as you pointed out, Post one of these thrown out and hopefully that that will never happen because we need this.

We need these lawsuits to force these companies into better disclosure efforts. You know, they have to be honest with us. And that is what is really at the root of not just this story, but every story that you and I talk about here. It’s about disclosure and it’s about honesty and about the only way we can force companies to do those things and be those things is through these class action lawsuits.

So if anybody needs more information about these particular issues, follow the links in the description of this video. Head on over to Top Class Actions, and of course, make sure you sign up for their weekly newsletter. Absolutely one of the best resources available for consumers, Scott Hardy with Top Class Actions. Thank you very much for talking with us today.