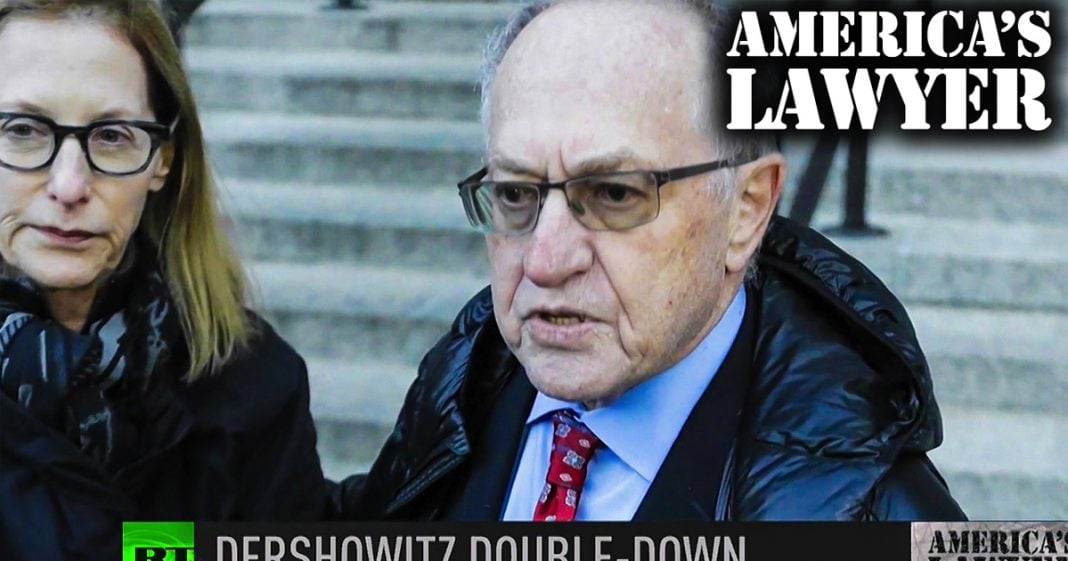 Via America’s Lawyer: Trial Magazines Editor Farron Cousins and legal & media analyst Lionel discussfamed attorney Alan Dershowitz and his recent comments which appear to double down on his claim that the age of sexual consent be lowered. Hot on the heels of Jeffrey Epstein’s saga, could Dershowitz’s timing BE any worse? Farron Cousins fills in for Mike Papantonio on this episode of America’s Lawyer.

Farron Cousins:                  Lionel, let’s go to another fight because we’ve got some other major news that we’ve got to talk about here. Alan Dershowitz, right?

Farron Cousins:                  He wrote a 1997 op-ed. It’s now resurfaced. And in that op-ed, he actually argued that we need to lower the age of consent. And now couple days ago he doubled down on these comments on Twitter while also of course still denying the allegations that he had inappropriate relations with underage girls at Jeffrey Epstein’s house. Is this a good look for Dershowitz to be claiming I’m innocent, but also let’s lower that age of consent?

The moment I take that same argument about me and I say and these people are rotten mothers, these are prostitutes, these are the vile. Whoa, whoa. Wait a minute, Alan Dershowitz doesn’t understand, but this is the way I’ve always been. It’s a different world. It’s not me too, by the way. And this particular idea, especially think about the timing with all this going on with Epstein, with all this going on, you know, I’ve got to say this, you know there’s this, dare I say, an internet story of Ruth Bader Ginsburg who also advocated the, the removal or the lowering of the age of consent to 12. That never happened.

It was a, it wasn’t even close. It’s on people’s minds. So what you need to do, which his point was very simply this, and I’m not advo, I’m not defending him, but he said, isn’t it perhaps maybe ironic that a person could, we could have a secure an abortion, whether you think of it or not, termination of a life or a pregnancy at the age of 16 or lower but cannot consent to sex. Okay. If perhaps rephrased, there is a lot, there’s something to it.

There is something to it, but the timing of this and for him not to distance himself and just move away, but let me tell you what this is really about. This is the battle. This is the lights out match that the Texas death match, as we NWA fans would say, that occurred or that’s occurring between David Boise and Alan Dershowitz. That’s, that’s the, the side bet.

Watch that one because this is, you know, Dershowitz is a, his, his take is to come back even harder, attack, attack, attack. In my humble opinion again, one of the best ways, the best tactics and tacks you can use is remember this and you can use this. America has the attention span of a nat. Just last week, Bob Mueller was in front of the world yelling, who ordered the veal cutlet? Nobody knew where, he didn’t know where he was.

Today, we don’t even remember it. So all Alan Dershowitz has to do is back up a little bit. Say perhaps maybe the context was different. These were different times. But what he does is he comes back on every platform there is doubling down. He’s on every show, basically saying, bring it on. And I think right now when litigation is pending, might be a good idea just to kind of tone it down just a notch or two. Just saying.

Farron Cousins:                  He seems to want to just waive that and say, you know what, I’m going to go out there and I’m going to talk and okay, I wrote a pretty weak legal argument 22 years ago for the La Times. But rather than distancing myself from that, rather than saying, you know what, yeah, you’re taking it out of context. What I really meant was… No, he’s like, well, well, yeah, let’s, let’s lower it. You should be able to consent to sex below the age of 16. Girls are hitting puberty earlier now, so why not make the decision earlier? That’s actually what he argued in the op-ed and now he’s saying, yeah, that’s, that’s right.

Lionel:                                      But also if, if I might add the reason why, and aside from any kind of, of physiological reasons, the reason why sometimes kids are engaging in sex more I would submit is because of this deprived world that we live in. This world where kids are being objectified and having their, their innocence or you know, ripped from their souls. This is not some kind of an election process. I think he understands the notion of strict liability. Again, it’s the timing.

What we’re having right now is we’re having people, look, there’s a case going on that he was involved at interestingly as well as, as well as Ken Starr and others as well. Where you basically took the, the sex trafficking of, of, of children and made it a prostitution case as though they were, what is this, the bunny ranch? They’re, they’re, you’re, you’re, you’re considering them to be able to, to voluntarily exceed or to consent to this. See that’s the problem.

This timing, you know, the reason why kids are having sex early and earlier is because of this depraved and stick world. These kids have been victimized. So again, it’s the timing of this and also you’re going to find out people who remember class as he said, statements that he made about lying victims. Lying women, lying, you know, victims claiming to be to, to have suffered the ignominy and the shame of this.

Again, it may have had from a point of view in terms of trial advocacy, a point of relevance, but the timing of this. And meanwhile, you know, who else is saying to him, shut up, is Epstein. Shut up. They’re coming after me. I’m the one in MCC. What are you doing? Shut up because they can’t get you, but they can get me. And he still has the rope burns around his neck of from whatever the heck he suffered from last week.

Farron Cousins:                  Right. Lionel, thank you so much for talking with me. This is great stuff. We will definitely catch up on this again in the future. Thank you very much.