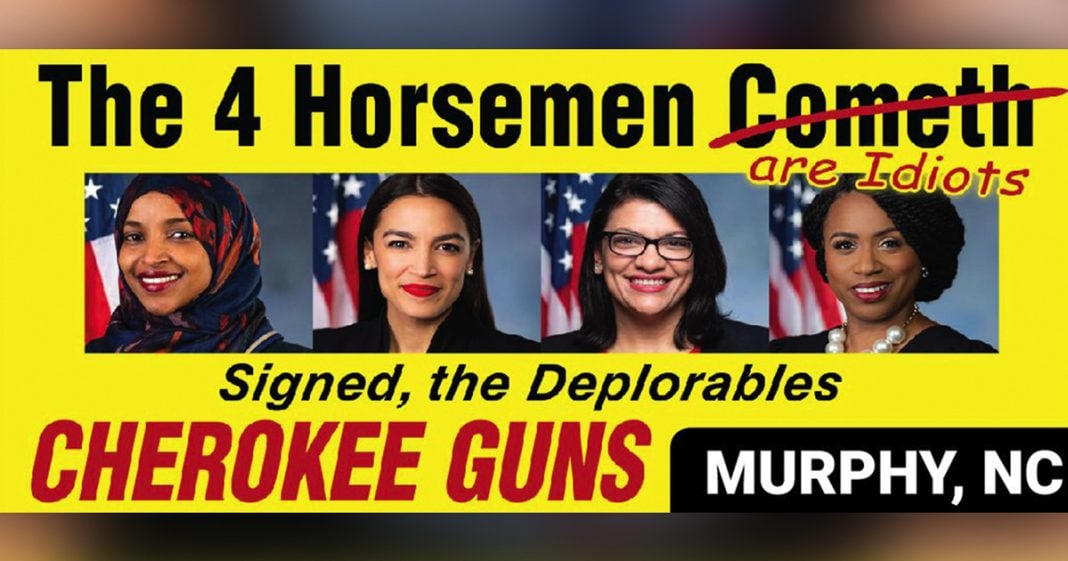 A gun shop in North Carolina is making headlines for their disgusting new billboard ad along a highway, where they refer to members of “The Squad” – Reps. Ayanna Pressley, Rashida Tlaib, Alexandria Ocasio-Cortez, and Ilhan Omar – as “idiots” and the “Four Horseman.” The owner’s interview with a local news outlet made it clear that he hates this women based on their religions and color of their skin. Ring of Fire’s Farron Cousins discusses this.

Over the weekend, a billboard when up in North Carolina that referred to the squad, which is representatives, Ayanna Pressley, Rashida Tlaib, Alexandria Ocasio-Cortez, and Ilhan Omar refer to them as the “Four Horsemen.” Now there’s billboard, which you can see right here. It says the four Horseman Cometh, but come with the scratched out and it says our idiots. These women are absolute idiots. According to Cherokee guns in Murphy, North Carolina, the people responsible for this billboard and they’re trying to cash in on the right wing hatred of these four strong women of color because they want to sell more guns. So they’re basically putting these people’s faces up on this billboard saying, you hate these women. Come buy some guns. And if that’s not trying to incite violence, then I’m not sure I know what is, but that is 100% what is happening here, which is what representative a to lay pointed out on Monday. This is absolutely vile and disgusting. The attacks that these women are experiencing on a daily basis. It is just beyond comprehension, folks.

These are good women who are doing a phenomenal job. Absolutely transforming the Democratic Party in the House of representatives from the inside. You know, you watch them when there’s hearings and they’re on the committee doing the hearing. These are smart, powerful women who come armed to the teeth with facts. I know a lot of Republicans do like to say these women are stupid. They said a stupid thing on Instagram. Well, first of all they didn’t, but second of all, everybody says stupid stuff on Instagram and Twitter. What matters is what they’re saying when they’re up there doing their jobs and they’re doing a phenomenal job of it. Making people who have been in Congress for 30 years look like absolute amateurs because these women are prepared and they’re smart and they’re powerful and they’re not going anywhere. No matter how many disgusting billboards you put up, it’s not going to work. But let’s go back to the billboard for a minute here. This group again, Cherokee guns, Murphy North Carolina posted on Facebook a couple of days after this billboard went up and they said,

“Alright my fellow Infidels for Trump . . . due to OVERWHELMING demand . . . you may come by the shop (next week) and get your very own FOUR HORSEMEN COMETH STICKER . . . simple . . . eat a piece of bacon . . . tell us you’re voting for Trump in 2020 . . . then get your limited edition bumper sticker! (While supplies last!) Snowflakes and Liberals are not eligible . . . sorry…”

It’s also worth pointing out in this Facebook posts that there are one, two, three, four, five, six, seven, eight ellipses, eight in one a sentence here. These people are absolute morons and they have the audacity to call somebody else in. Idiot. The these people don’t even know how to capitalize or properly into sentence or use a comma or anything like that. These are back woods, gun toting hicks who are picking on women of color because they don’t like women of color. And if you don’t believe me, then let’s just see what the gun shop owner had to say to the local newspaper when they interviewed him a couple of days ago. He said they’re socialists. From my point of view, I also feel a couple of them be an Muslim, have ties to actual terrorist groups.

I’m not inciting any violence or being racist. It’s a statement. It’s an opinion. No, you’re inciting violence and being a pretty hardcore racist here, bud. You said that because they’re Muslim, they’re likely terrorists. Guess what? That’s bigotry. That’s what that is. You idiot and you can’t do that. I mean, actually you can do that. It’s just frowned upon in this country for good reason. You’re a bigot. You’re trying to profit off your own bigotry and your hatred of these women, and you’re going to put them in even more danger than Donald Trump already has. You are a disgusting and vile human being, as is the billboard that you will wrecked it along that highway.