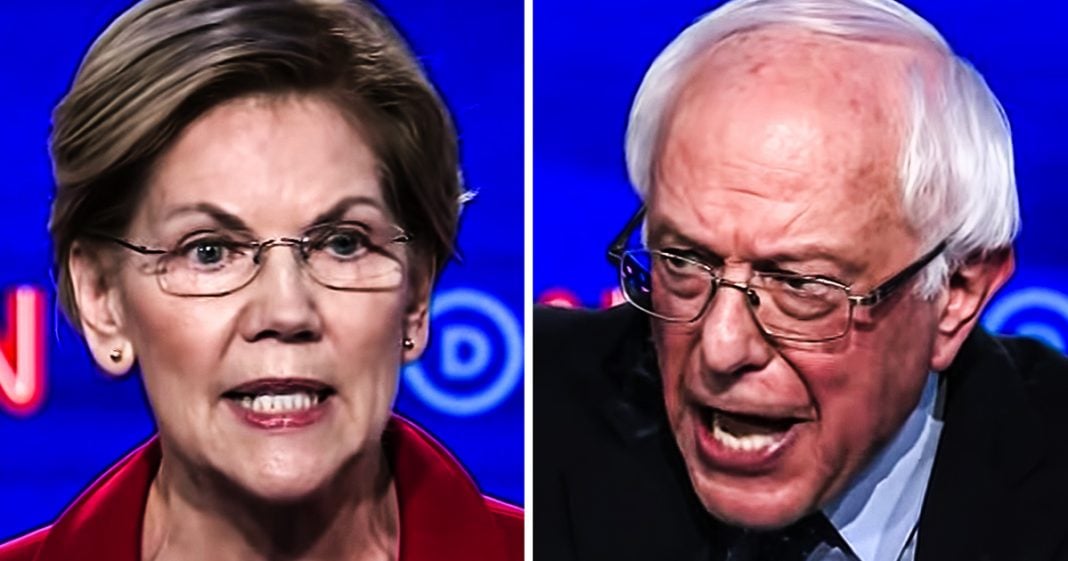 Most of the Democrats running for President right now appear to share a common trait: They are just as afraid of change as the Republican Party. We have candidates like Elizabeth Warren, Bernie Sanders, Andrew Yang, and a few others who are proposing major overhauls to this country, while other candidates keep telling us to lower our expectations and stop trying to make the world better. Ring of Fire’s Farron Cousins discusses this.

Well now that both of the democratic debates are over and we’re going to head into a debates with hopefully a fewer, a few fewer candidates, a the coming month or so. It’s time to look back at what actually happened this week in the debates and one thing we learned is that a lot of people running for president right now are absolutely terrified of big, bold, progressive ideas. Something that Bernie Sanders himself pointed out during the Tuesday night. First round debate, Bernie said this, he said,

“”I get a little bit tired of Democrats afraid of big ideas. Republicans are not afraid of big ideas — they could give $1 trillion in tax breaks to billionaires and profitable corporations, they could bail out the crooks on Wall Street, so please don’t tell me we cannot take on the fossil fuel industry. Nothing happens unless we do that.””

Now in this specific instance, this was with regards to the green new deal taking on the fossil fuel industry, ending their subsidies, combating climate change and blah, blah, blah. But Bernie was speaking a little bit more broadly to here. Democrats, especially those, a lot of them, most of them that we saw up on the stage these past two nights, they’re terrified of big ideas. I mean, if they had their way, the slogan for 2020 would be Democrats 2020 aim low and then try to get a little bit under that too if you could. That’s what they’re telling us up on the stage and it’s absolutely pathetic. Look, is it possible to get Medicare for All in place on day one for the next president of the United States? Nope, it isn’t. But is it something that we can work towards and probably have it in place by the end of that person’s first term? Yep. 100% it is. But to listen to some of these Democrats on stage, they’re telling you, nope, this can never happen.

Why even bother? Don’t try to change things because everything sucks and it’s always going to suck. And that seems like a lot of work and I don’t want to do it. And there’s a real reason why they don’t want to do it. It’s hard work, folks. They don’t want to put in the effort. Most of the people running for president today are vanity candidates. They know they have no shot at winning the presidency but they’re doing it because they want to raise their own profile. They want to raise a lot of money. They can then use that money. You know for some other things questionably cause you know you’ve got to fall within the law but there is some loopholes in there. They can use this money to pretty much do some things to help them out personally and that’s why they’re running. They have no intention of making this country better.

They have no intention of fixing any of the problems that we face on a day to day basis because they don’t face those problems and they’re not actually talking to people who do face those problems. They didn’t get on a bus with a bunch of diabetics and had to Canada to buy medicine with them. Bernie Sanders did. He understands their plight. He talked to them on that bus ride. He’s been talking to them for years and he understands we’re going to make it realistic. You may say that it’s not that there’s no way to make these things happen, but damn it, we’re going to do it. That’s what Bernie Sanders is telling us. That’s what Elizabeth Warren is also telling us. That’s what Andrew Yang is telling us about is universal basic income. That is also a bold idea. I’m not even saying it’s one that I support because I don’t think it’s that great of an idea, but it’s bold and it’s big and he’s passionate about it and he knows that maybe it’s unrealistic, but he would make it a reality just like Bernie with Medicare for All in debt free college.

Same with Elizabeth Warren on Debt Free College and Universal Pre k and all of those measures. She might not be as progressive on Medicare for All, but I think we can push her there 100% then you’ve got the other folks, you’ve got Combo Harris out there telling us that. I also have a Medicare for All plan. That is basically just private insurance giving you health care. Well, first of all, that’s not Medicare for All. And second of all, we have that now and it absolutely sucks. So yeah, thanks for nothing. Joe Biden out there telling us all with his beautiful Joe Biden smile, we can’t do anything. Folks, aim low, things suck and they’re always going to suck, but you vote for me and I’m just going to make them suck the same amount that they currently do and not make it get worse. Probably Hickenlooper Delaney who, man, those guys should primary Trump right now because they are absolutely republicans trying to run as Democrats.

But most of these people all do have that one thing in common. They hate change just as much as the Republican Party. There are a couple of good choices among this crop of Democrats in those, a good choices are standing out more and more, and the reason they’re the best choices is because they’re the only ones pushing big, bold, progressive ideas that the majority of Americans in this country left, right and center actually support. That’s the only way you’re going to win elections. Not by running back to the mythical center, but by pushing for big ideas that everybody understands we need.