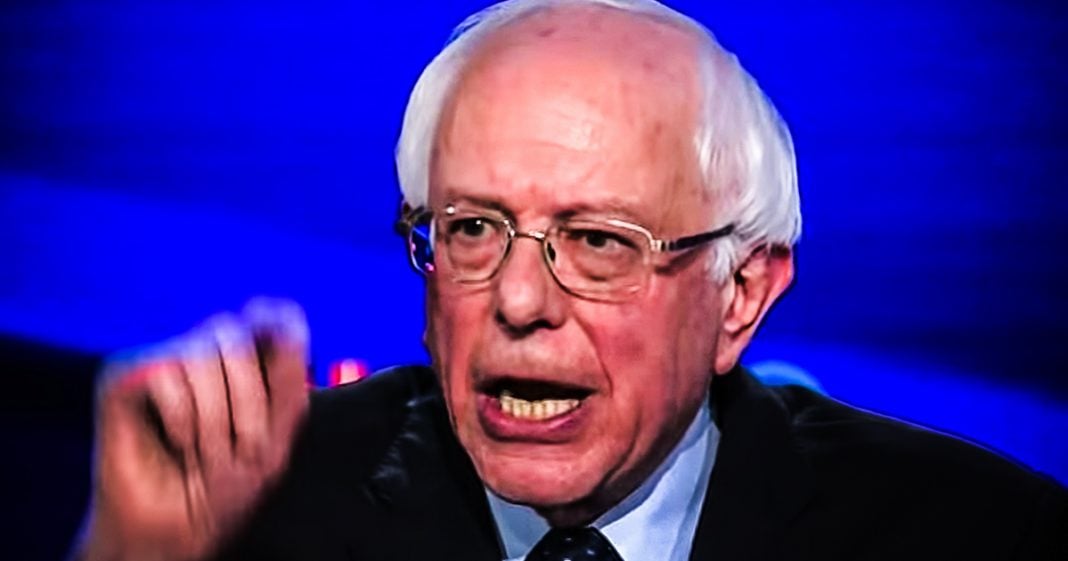 During the first night of debates this week, Senator Bernie Sanders called out CNN for allowing major pharmaceutical companies to help sway the network by purchasing millions of dollars worth of ads on the network. And sure enough, the next commercial break featured ads for drug companies. They also ran ads for anti-Medicare for All groups, along with other biochemical companies. Big Pharma owns the corporate media, and we’ll never get real coverage of the issues from them as long as this continues, as Ring of Fire’s Farron Cousins explains.

During Tuesday nights, democratic debate. Bernie Sanders made a very interesting point to CNNs j tap or, and he said, Jake, uh, you know, you’re asking me these questions framed from basically the Republican talking points about Medicare for All, but your network here is going to be showing ads from pharmaceutical companies. Tonight we’re going to see some big pharma ads and then sure enough, the next commercial break. What did we see folks? We saw ads for big Pharma. We saw as David Dayen from the American Prospect pointed out, uh, ads from the Partnership for America’s Health Care Future (PAHCF), which is a group that’s fighting Medicare for All funded by hospitals and drug companies basically. And also Wednesday night prior to the debate, right? Ford started, we also had more anti Medicare for All ads. We had drug company ads selling their latest blockbuster pill all throughout the night. So essentially we had the democratic debates brought to you by big Pharma. And here’s the thing, these aren’t cheap ads either. CNN required a commitment of at least $300,000 to buy ad space during these democratic debates.

And here’s the issue folks. We watched it. I watched him. I know most people watching this, watch those and unfortunately what we did by watching those was that we gave CNN bigger numbers. Show that down. Next time they’re going to host a debate, they can walk back up to those same farts. Pharmaceutical companies, those same companies fighting Medicare for All and say, well, here’s our numbers. Our prices have gone up. You’ve got to give us an extra $200,000 we just made CNN more money from these corporations who would gladly let us die because they don’t want to lower their prices.

Big Pharma owns the corporate media. They do the billions of dollars they spend every year on advertising alone is enough to own these big a multimedia conglomerates here, but that’s not the only part. You know, Bernie talked about the money and that’s something very easy, something most people can understand, but there’s another thing which we have discussed here multiple times on ring of fire that I’m going to rehash once again, and that is the fact that every single major media outlet here in the United States, including the major newspapers, they all share at least one board member with a pharmaceutical company. Did you know that? That’s how that works, folks. It’s something I had to research a probably 1213 years ago to really find out every company on this planet does not just have a single group of board members and that’s just their little board members. Nobody else gets to share them. Most companies share board people. They’re also over here and they’re on this one and they’re on this one and they’re on this one and they’re on this one. That’s how it works, and unfortunately a lot of those happen to be drug company board members who leave their little meeting at the drug company, get their little talking points. Then they go over to NBC or Fox or CNN and they have their little board meeting with them.

That’s why you’re not hearing enough talk about Medicare for All and how it would be a great thing. That’s why these corporate media outlets aren’t doing stories on astronomical price increases from big Pharma companies and less, it becomes an issue that they cannot ignore without raising eyebrows. Right. I mean, they did talk about EpiPens many, many years ago. They have occasionally talked about insulin, but it’s across the board folks. It’s not just those drugs. Generic drugs are going through the roof, but they’re not talking about that. And more importantly, they also don’t talk about when these drugs, oops, this drug just killed 5,000 people and there’s a massive recall of it and tens of thousands of people have it in their medicine cabinet. Should we cover that on the Rachel, Matt, I’ll show tonight. No, probably not. Do you think Jake tapper wants to talk about this? No, I think he’s going to pass. Sean Hannity? No, Sean Hannity’s on enough medications as it is, and that’s the problem with the corporate media.

Folks, there’s dangerous drugs out there every day killing American citizens. And I promise you, because I know this from experience, from pitching stories and working with other producers, they will never, ever, ever tell that story because as they’ve told me in the past, personally, they’re not allowed to.