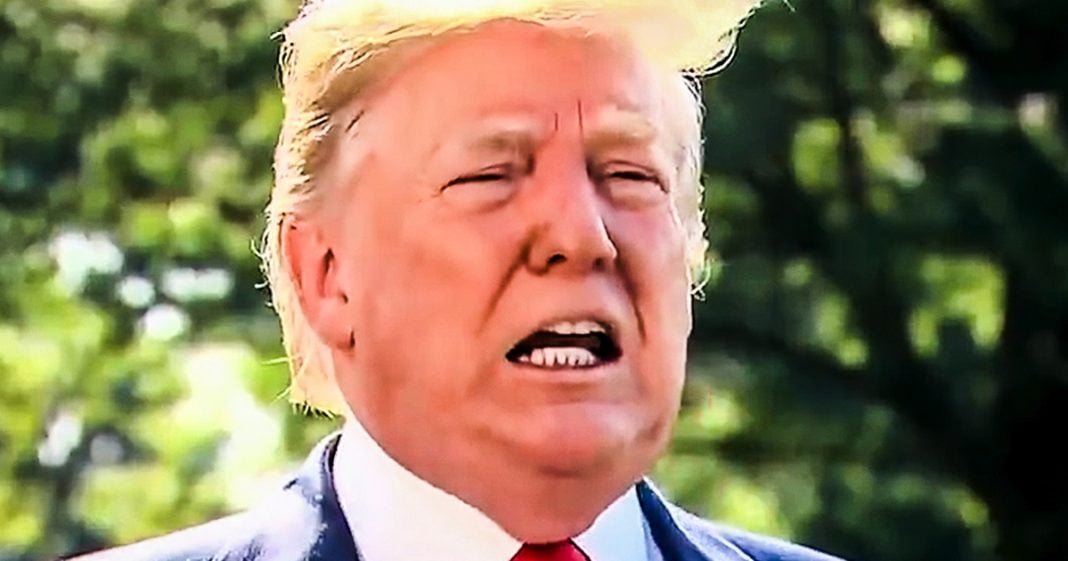 Donald Trump was asked about Mitch McConnell’s refusal to secure our elections, and his answer might be the first time he was honest with reporters. He said that McConnell knows less about collusion or election interference than Trump himself, and Trump knows nothing about it. So his whole defense is that both men are stupid? Ring of Fire’s Farron Cousins discusses this.

Yesterday, reporters finally decided to ask Donald Trump about Senate majority leader Mitch McConnell repeatedly blocking any efforts from the Democrats to actually do something about election security here in the United States. And his response, while meant to be a defense of Mitch McConnell, might actually be one of the most insulting things you could ever say about somebody. And here is the very brief clip.

“Mitch McConnell is a man that knows less about Russia and Russia influence than even Donald Trump, and I know nothing.”

So I guess if we’re going to break down that a ten second clip there, it basically boils down to Donald Trump saying that Mitch McConnell is not a smart person. He’s not as smart as Donald Trump. And Donald Trump is also not a smart person. I Trump literally ended that clip by saying, I know nothing. I know nothing. And Mitch McConnell knows less than that because he’s a good person. Uh, there’s also the weird, you know, perspective shift because he’s, Donald Trump knows nothing and I know nothing. What? I mean, he referred to himself in the third person and goes back to first person. Uh, very weird obviously, but to kind of hit on the point that he knows nothing, which honestly might be the first truthful thing. He said that Mitch McConnell knows nothing. Uh, I think both of those statements are actually true because they refused to look at reality. If Donald Trump would, I don’t know, maybe read some of these reports out there from, from the intelligence agencies.

Hell, read the Mueller report. They all spell it out very clear. Our election system is vulnerable. People are influencing it right now. They influenced it in 2016 even more. People are trying to influence it today and it’s going to continue happening unless we do something that, that’s why it keeps happening because we’re not doing anything but Mitch McConnell doesn’t know anything about it.

Donald Trump doesn’t know anything about it because they’re choosing to remain ignorant about this particular issue. Hell, we have been talking about it for 15 years here on Ring of Fire. Other people out there, Brad Friedman’s been talking about it even longer than that. We have known that our election systems are vulnerable, not just to the Russians or Chinese or whoever it is that wants to hack from overseas, but to hackers here in the United States to downright faulty voting machines that flat out don’t work and don’t produce a paper trail. We have known this for well over 15 years. We have been warning you for 15 years, so there is no excuse for anybody in this country because we’re not the only ones who have been saying it, but there’s no excuse for anyone in this country, president Senate, majority leader or person down the road from you to say that they didn’t know our elections were being tampered with. They have been tampered with for nearly two decades at this point. And if you’re ignorant about that, it’s because you’re choosing to remain ignorant about that. But that is exactly what Trump and Mitch McConnell are doing today.