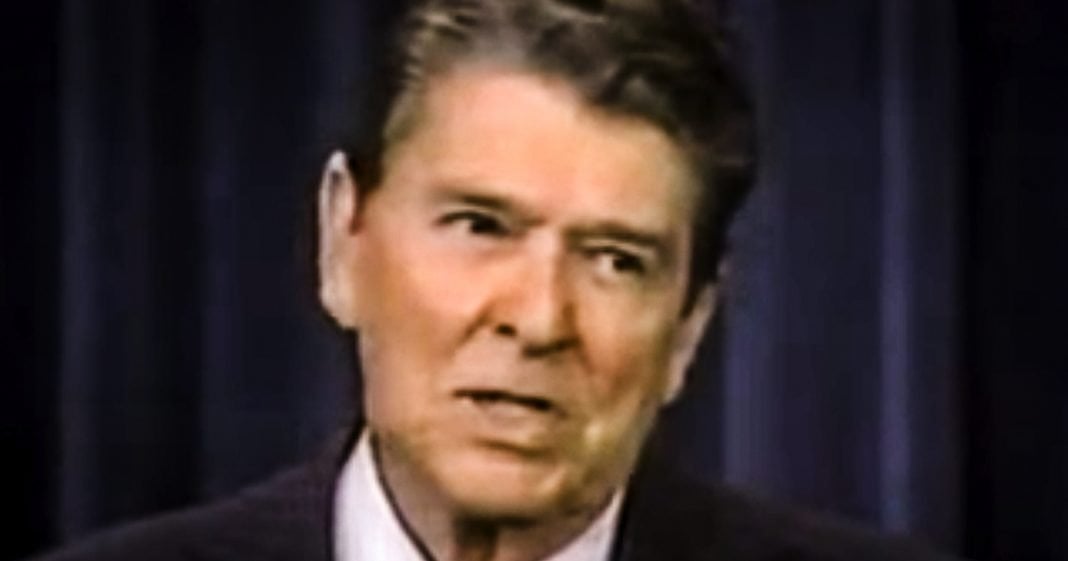 Recently-unearthed tapes reveal that Ronald Reagan didn’t exactly have a high opinion of people from African countries, and he referred to them as “monkeys” during a 1971 phone call to Richard Nixon. This confirms what we’ve been saying for a long time, and that is that Trump isn’t an outlier in terms of hating on non-white people – this is who the Republican Party has been for decades. Ring of Fire’s Farron Cousins discusses this.

You know, a lot of us have been saying for a very long time that Donald Trump is not the person who pushed the Republican party into full blown racism. He’s just the one who allowed it to be shared out in the open. Right? You know, we have talked many times in the past about how Ronald Reagan’s use of the Welfare Queen Image, uh, was rooted in racism and the hatred and dislike of the others. And every time we do that, somebody comes out and say, Ronald Reagan was not a racist. How dare you say that? Well, guess what, folks, thanks to the Richard M. Nixon Presidential Library releasing tapes that they had previously tried to keep hidden. We can now prove that Ronald Reagan, former Republican president and hero to Republicans everywhere was in fact a pretty majorly racist. I’m going to read a quote from a recently on earth taped tape. Here it is.

This is a 19 October, 1971 conversation between Richard Nixon who was president and Ronald Reagan. What they were talking about was the fact that a, the UN had just made the decision to recognize the People’s Republic of China. And when that happened, uh, the Tanzanian delegation was very excited. Here’s the phone call Ronald Reagan says,

“Last night, I tell you, to watch that thing on television as I did,” Reagan says.

Reagan replies, laughing: “To see those, those monkeys from those African countries — damn them, they’re still uncomfortable wearing shoes!”

That is what Republican hero and Savior Ronald Reagan had to say about black people from Africa. “…damn them, they’re still uncomfortable wearing shoes!”

Those, those monkeys, he called them. Now I can already hear far off in the distance growing louder and louder. All the cries from conservative saying, but it was a different dog time. It was a different time. He’s totally not racist back then. That was normal. Um, no, it wasn’t folks that was not normal. That was not socially acceptable even at that time. Alright, we’re talking 1971 here. Not that far off, but this is who Ronald Reagan is. In another tape the next day, I think, Richard Nixon was talking to his then secretary of state, William Rogers, where he repeated what Reagan had to say. He said,

“As you can imagine,” Nixon said to Rogers, “there’s strong feeling that we just shouldn’t, as [Reagan] said, he saw these … cannibals on television last night, and he says, ‘Christ, they weren’t even wearing shoes, and here the United States is going to submit its fate to that,’ and so forth and so on.” Richard Nixon said,

Here’s the thing, not only are these comments by Ronald Reagan extremely racist, confirming what we have said for a very long time, that Reagan was in fact racist. They’re also pretty damn elitist, right? They’re not even comfortable wearing shoes show. He was intolerant of other people’s cultures looking down his nose at these people, and then somehow nine years later, because this tape actually wasn’t released at the time, elected president of the United States for two terms, Reagan was a piece of crap. Folks. There’s no denying that. Not only based on the policies he enacted while president, but now we’ve got these comments to back it up. He was not a good person. And I’m sick and tired of seeing Republicans ever since he left office, essentially deifying him acting like he was the second coming of Jesus Christ himself, the savior of the Republican Party. No, he helped put you on the path that you are on today.

None of this could have happened if Reagan hadn’t tapped into racial resentment of Republicans in this country. So when you look at Trump, when you see him make stupid claims like you did yesterday, that, uh, for example, he’s the least racist person you’ll find anywhere on the planet. We know that’s not true, but when we look at how racist that man really is, don’t just blame him. You got to go back in time a little bit and realize that Ronald Reagan really is the one who put the GOP on this path.