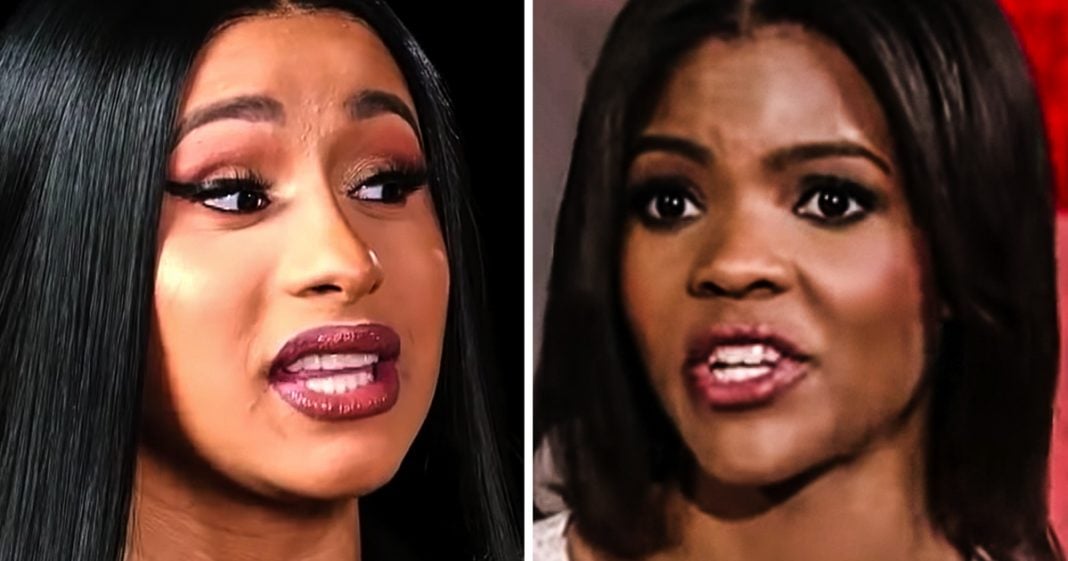 Right wing grifter Candace Owens is angry that Cardi B is working with Bernie Sanders, and Owens believes that the best way to work this out is with a public debate. Owens took to Twitter on Monday to offer Cardi B the chance to debate, and Owens said that she’ll donate $250,000 to the charity of Cardi’s choice if she agrees. By making this offer, Owens exposed her own grift, proving that she is in the pocket of the wealthy elite and is little more than their puppet. Ring of Fire’s Farron Cousins discusses this.

“PLEASE RETWEET. I see that @iamcardib is politically advocating for Bernie Sanders with claims that Trump is bad. I would like publicly offer 250k to a political campaign of her choosing if she will publicly debate her stance with either myself or ANY black conservative I choose.”

She did later clarify almost immediately really that she wasn’t talking about donating 250,000 to a political campaign, but any kind of charity or organization, because obviously a $250,000 donation to a political campaign, it’s pretty much going to be a felony campaign finance violation that could land Candace Owens in jail. That’s not what she wants, but don’t worry. After the kind folks on Twitter pointed that out to her. She went ahead and uh, made that revision in a separate tweet. But how in the hell does Candace Hollins have $250,000 to just throw around folks?

That’s the grift. That’s what she exposed and that’s what people are calling her out for. And rightfully so. I can, I can pretty much promise you there’s not any lefty or liberal commentator that could just straight up be like, I’ll give you $250,000 come to bait me right now. Come on, let’s do it. Yeah. We don’t have that kind of money because we’re not funded by millionaires and billionaires and corporations, but Candace Owens exposed that yesterday, then yes, she is. Charlie Kirk is. Ben Shapiro and Tomi Lahren, they’re getting Fox News money. All of these people always follow the same patterns, right? You go out there, you sell your soul.

Quite literally in this instance, they give you tons and tons of money for you to be their useful idiot, which is what people like Candace Owens and Kirk and Lahren and all of them. That’s what they are. They are useful idiots. They know better. They have to know better. At least I think Candace Owens and Charlie Kirk are smart enough to know better. They’re just choosing to be stupid because the paychecks are two good Tomi Lahren and a Ben Shapiro. I have no faith in them whatsoever. They’re, they’re just horrible people who believe horrible things. Candace Owens and Charlie Kirk are horrible people, but they are understand that they’re horrible. I think they do have a bit of self-awareness. They just like the money and the money’s worth it to them. But back to my point, you know, this is something that really highlights the difference between progressive media and conservative media. They’re getting funded by people who pay them so much money to say stupid things that they can just throw around $250,000 to debate Cardi B like it’s nothing.

It also raises the question of Candace, if you’ve got $250,000 you’re willing to donate to charity. Why not just donate it to charity? Why not just be a decent human being for five seconds? And do that. I’m willing to bet that if this debate were to happen, you wouldn’t win. Candace, I have seen you debate. I have seen you speak. You’re not good at this. You’re not good at any of this, and honestly, I am a bit jealous that you get paid so much for it and the rest of us are struggling to get by. It doesn’t seem quite that fair, does it? I’ve been doing this for 15 years. Never once in my life have I ever had $250,000 to throw around on it a thing. But that’s beside the point. The point is, corporations, millionaires and billionaires are the ones funding these right wing people who are out there making asses of themselves every single day. And Candace Owens, little misguided tweet here helped expose that grift so that everyone can see it for themselves.