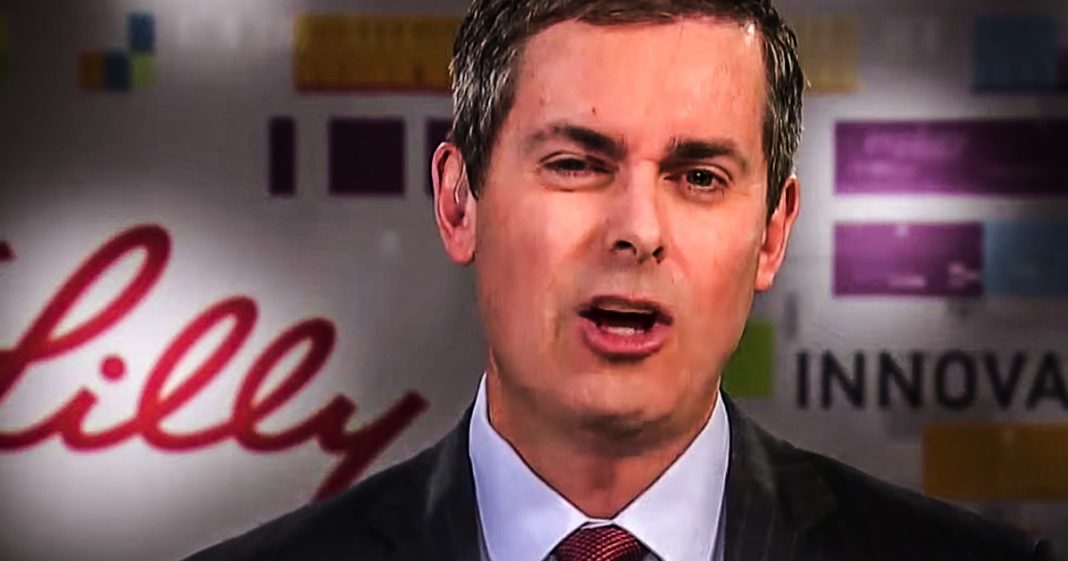 During an appearance on CNBC, Eli Lilly CEO David Ricks lashed out at Bernie Sanders for his Medicare for All plan, claiming that this move would kill the pharmaceutical industry. This is a lie. It will have zero effect on innovation and new drug development, since the bulk of that funding comes from the government itself. We are already paying for socialized medicine, we just also have to pay the private industry, too. Ring of Fire’s Farron Cousins discusses this.

Yesterday on CNBC, David Ricks, the CEO of Drug Company, Eli Lilly was allowed to go on that network to tell us just how bad things are going to be in this country. If people like Bernie Sanders get their way and we finally get Medicare for All, and according to Rick’s a who makes his money. Obviously price gouging American consumers here, things are going to be really bad and prices are still going to be astronomical because Bernie is not going to fix anything or read you a couple of quotes from Mr. Rick’s little CNBC interview there.

“There’s a lot of rhetoric in the air, and most of it non-productive. We could cap that forever. And what we get is less innovation and still have growing health-care costs.”

So basically Mr. Rick’s right here against CEO of Eli Lilly is admitting that, hey, even if you put Medicare for All in place, I’m still going to raise prices. I’m still going to price gouge you. That ain’t gonna change nothing. And if you cap it, then you’re capping innovation here in the United States.

Now Mr. Ricks knows the truth. He knows first and foremost that what he’s saying is an absolute lie, but he also knows as the CEO of a drug company that the vast majority, over 75% of the funding for the research and development of pharmaceutical companies here in the United States come straight from the federal government itself. Folks, we already have socialized medicine here in the United States because the government is funding drug research and development. They’re making the drugs for us. It’s just that in addition to that, socialism, we also have some capitalism thrown in there because after we our tax dollars pay for the development of these drugs, we don’t just get to have them. No, no, no. Then the private a company takes over, capitalism takes over and they’re free to set the price to whatever they want, spend billions of dollars on advertising, so they have to jack up our prices a little bit more. Sometimes to the tune of, you know, 200000% increases on drug prices for some drugs here in the United States. Otherwise, you know, we’re typically paying between 10 and 100% more or 100 times more. Excuse me, than other countries.

And Mr. Ricks knows that. He knows they didn’t pay for the R&D, The costs they’re trying to recoup or their advertising costs. We’re paying for these drugs to be developed and then we’re getting screwed on the price worse than any other people on the planet. So you got to take part of that out of the equation. And we can’t take the R&D funding out of the equation because yeah, then that would hurt the pharmaceutical companies. So how about we take the privatization out of the equation. We’re paying for these drugs. They should be nationalized. When you look at your paycheck every week or two weeks or whatever it is, when you get paid and you see those taxes come out, your federal income tax, part of that money goes to develop new lifesaving pharmaceuticals. So we’ve already paid for the drugs, we’ve paid for them. And then suppose we get sick and we have to go to the doctor. We got to pay for the doctor. We got copays and deductibles, then we got to go to the pharmacy. You’ve got to pay a copay or deductible there to astronomical again, anywhere between 10 times and 100 times more than what you pay across the border. So we’re paying for these drugs twice.

“We agree it’s time for change. We agree that patients need relief in the cost of medications.”

Dude, you’re the CEO of a drug company. If you honestly felt that way, you could literally lower prices today. You could issue a very short memo that just says reduce all costs of our drugs by 90% that’s it. That one sentence, that one fricking sentence, man, you could do this shit. Don’t you dare get on TV and act like Oh, we all think it’s time something happens. You’re the one moron in a position of power to make it happen. You may the decisions you did this, so stop acting like there’s nothing you can do about it because you could. You’re just choosing not to because it must feel really good having that massive wad of cash sticking out of your pocket because that is the only thing you actually care about. Mister Ricks.