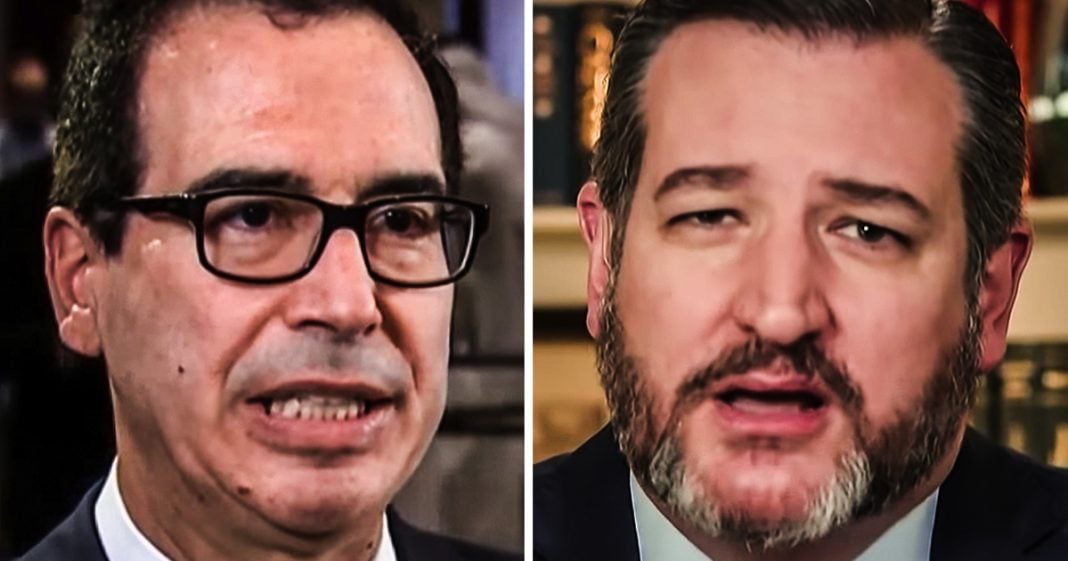 Republican Senator Ted Cruz believes that the top 1% are still paying too much in taxes, and he’s asking Treasury Secretary Steve Mnuchin to change how capital gains are taxed. This move would cost the US more than $100 billion over the next ten years, and 90% of the savings would be concentrated within the top 1%. This appalling, but not surprising, as Ring of Fire’s Farron Cousins explains.

There’s no question that there’s lots of problems facing this country today. I mean there’s student loan debt crisis, the crisis down there at the border with children being locked in cages, a US citizens actually now also being rounded up just because they look for, and even if they’ve got a passport and you know, if they were born here in the United States, we’re still rounding them up. So we’ve got those problems. We’ve got a trade war that’s hurting the US economy. But Ted Cruz isn’t concerned about any of that. Ted Cruz is concerned about the real problems facing this country and those problems happen to all be the same. Rich people are still paying too much money in taxes and Dang it, ted Cruz is leading the crusade to save these poor, oppressed one percenters because the tax cut they got two years ago simply wasn’t enough.

According to Ted Cruz and 20 other Republicans who signed onto his stupid little letter to treasury secretary Steve Mnuchin, begging him to “adjust capital gains to inflation.” Now if that phrase is something you don’t quite understand, don’t worry. You’re not alone. Basically what it means is that capital gains, you know, any gains you make off of capital that you own, which is what rich people make a lot of money on, we’re going to adjust it for inflation. So if inflation goes up, your taxes are going to go down roughly that same amount because you’re going to get to write off that much. Basically, it’s going to cost the U s economy about $10 billion a year in tax revenue. If Ted Cruz’s plan goes through, and again, 20 other Senate Republicans signed on to this stupid little letter begging Mnuchin, please make this adjustment. But it’s not just that Ted Cruz is still out there saying, we got to cut taxes for the wealthy elite.

It’s his rationale and it’s the same crap we hear every single time. Direct quote from Mr. Ted Cruz,

Even though of course, according to reports, the, uh, all of the gains from this, all the actual tax cuts from this would go to 86% of it would go to the top 1%. But Ted Cruz is telling us it’s going to unlock capital for investment. Just like they told us with the Republican tax cut and we found out, oh, it didn’t do that. Companies are not investing in new buildings and new technologies and new computers. No, no, no. They’re giving the money back to themselves by just buying back their own stock. He says it’s going to, uh, increase wages, except for the fact that we know that the initial tax cut did not increase wages.

Majority of workers in this country said that they have not seen an extra dime in their paychecks in the two years since we passed those tax cuts. So there’s another lie. He says it’s going to create new jobs, except again, a lot of the companies that got the tax cuts, some who got the biggest tax breaks, they’ve actually laid off thousands upon thousands, tens of thousands of workers. So they’re not creating new jobs even though they have more money because that’s not what was holding them back from creating new jobs. Grow the economy. No, I mean I don’t have to go more in depth on that cause we’ve already established that it’s not going to help businesses grow. It’s not going to increase worker wages and it’s not going to create new jobs. Therefore it has no way of helping the U s economy. And of course benefiting Americans across all income levels. Ted Cruz, you’re a damn liar and everybody knows it. Nothing of what you said is true here. Nothing. But here you are at a time when American citizens are suffering, they’re being screwed over by every policy you republicans put forward, their wages are stagnant and the biggest thing that you could do is come out here and say we need to cut taxes for the wealthy again. I mean, God, it’s been two years almost since they got a tax break. Don’t you think they’re do? This is absolute disgusting garbage, but then again, so is Ted Cruz.