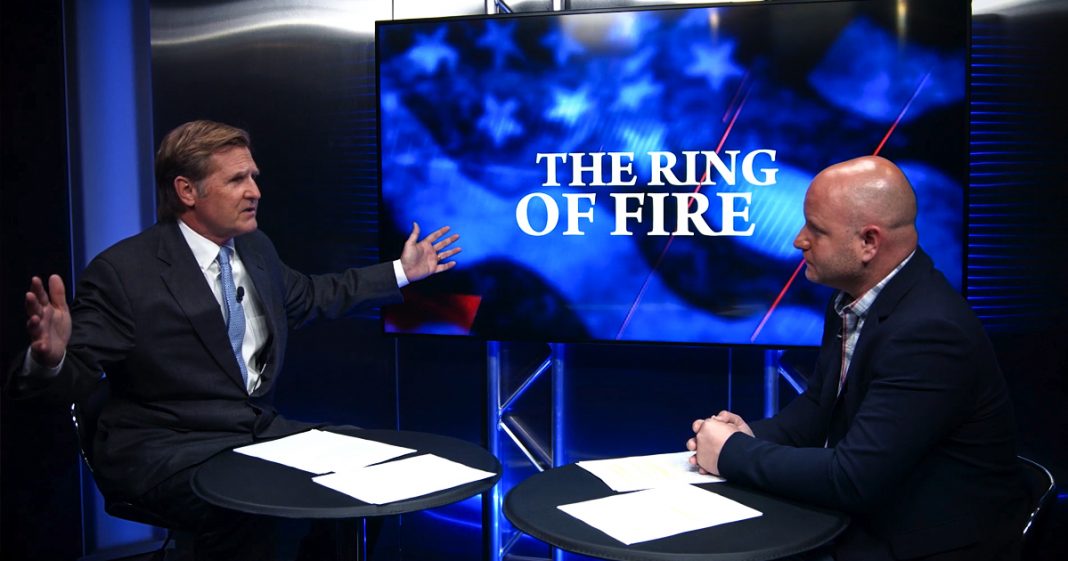 Every time Obama walks on a stage, the media acts as if this was the perfect politician. But during his administration, drilling was an all time high. Fracking was increased. He also wanted to increase the power of NAFTA and CAFTA. Ring of Fire’s Mike Papantonio and Farron Cousins discuss more.

Mike Papantonio:             The government is, is really dropping the ball where it comes to protecting these children that are trying to cross the border. Truthfully, they’re, they’re being caught, but once they’re caught illegally crossing the border, that doesn’t mean we have the right to mistreat them. And this, this report is very, very sobering. Take it.

Farron Cousins:                  Well, what’s interesting about this report is not just the abuses that it details, and we get to that in a second, but the fact that this information was obtained via Freedom of Information Act, request, American Civil, the ACLU, international human rights clinic, a couple of other groups finally got their hands on this information. And going back to at least 2009; rape, physical assault, mental abuse, all kinds of atrocities perpetrated against immigrant children coming into the United States. And what’s interesting about it again, is the fact that right now we’ve got every liberal and even some conservatives up in arms about the fact that the Trump administration’s policy is to strip immigrant children from immigrant families.

Farron Cousins:                  Which is horrible. But, don’t get me wrong, it’s, it’s atrocious. But do not think for a second that this government was not committing these horrible acts against children during the Obama years because that’s what this report shows.

Mike Papantonio:             Well, that’s, that’s the problem here. Okay. The problem is we, we’re trying to contrast the, the, the Golden Obama years, I suppose. I mean, it’s just, they’ve taken it to such a crazy level of adoration when we’re not being honest about it. This report clearly comes from the Obama administration. That by the way, was that there were, there were complaints during the Obama administration that the border patrol, patrol had turned into a bunch of monsters. I mean, the best way, that the term that they used was the monstrous kind of activity coming from the border patrol all during his administration. So now Donald Trump’s people are out there and they say, okay, we got away with it, this last administration.

We’ll sure be able to get away with it this administration. But what we’re missing about is who are these people? Okay. Who are these folks that they give border patrol jobs to? Most of the time they don’t come from typical kind of law enforcement training. The recruitment of it is usually it’s bottom of the barrel, kind of characters that we’re gonna put out there on the border. Because, you know, it’s kind of private. Nobody really knows what they’re doing. Nobody sees what they’re doing. It’s kinda done in a, it’s done in a shroud. We don’t understand what’s going on out here. But what you have is a, you know, you’ve got specific report after report, 16 year olds basically being raped. 14 year olds that are being, that are being manhandled in a way that’s nothing less than sexual abuse.

You have a report, I saw this 16 year old boy recounted that a patrol agent threw him to the ground, used his boot to literally smash the boy’s face to where he needed medical care after that. So, I mean, I, I look at this and I just wonder how, how did that happen for those years? And here’s what bothers me. It happened during the Obama years because we were asleep at the wheel because we were charmed by the fact that this man was a wonderful speaker. I mean, he was a charming character. He could have been an actor. Really probably would have been a wonderful actor. And we were charmed by that. In this report and I think the ACLU is reacting the same way. The, this report shows what happens when we try to, to put too much of our faith in a character hero. This happens. All this happened during the Obama administration.

Farron Cousins:                  Yeah. Tasers, Baton’s, all kinds of, you know, weapons that these officers carry used against these children because again, at the same time, it may not have been the official policy as it is today, but they were still stripping children from their parents. You know, sometimes never to be seen again.

Farron Cousins:                  And let’s, let’s think about this for a second too. When we talk about these people illegally coming over the border. Do you, do you know what level of crime that is coming from Mexico into the United States illegally? It is a misdemeanor. It is the same as trespassing, reckless driving, public intoxication. It’s on the same level as walking down the street drunk. This is not a felony. This is not, you know, you don’t treat them like you would a rapist or a murderer. And these are kids. But yeah, back to 2009 and with the Obama story there it was because liberals unfortunately, well democrats.

Mike Papantonio:             Democrats of the liberal movement were so in love with this character that it was like he could do no wrong. And now look how many stories have we done, pro Obama? Tons.

Mike Papantonio:             But again, when we get tribal, when we don’t, when we’re not honest with who’s, who’s really doing what. But I mean, if we take a look at the, that, the, this, this, this story brings to mind, I mean, look, during the Obama administration, drilling was an all time high. Fracking was increased, something like 70% in the United States. You had him wanting to increase NAFTA and the power of NAFTA and CAFTA through the trade agreements. You had Obama signing off on, on legislation that allowed pharmaceutical companies to rape and pillage the entire United States.

So I guess what I’m really getting at since I’m not a Democrat and I’m not a Republican, is I’m pretty pissed. That we ever, you know, every time this man walks on a stage, it’s, oh my God, this is, this is, this was the perfect politician. No, he wasn’t the perfect politician. This story, if the media will actually tell this story, I doubt CNN is going to tell the story. I doubt MSNBC is going to tell the story, but social media found this story and social media, will talk about it and that’s why I come back to the same point again. Corporate media is dead. If you want to get information, you really need to go to things like YouTube television because that’s where the information is.

Farron Cousins:                  Well, and it’s really interesting just when you think about the fact that all of these, you know, tribalist Democrats back then, they overlooked the abuses because it wasn’t unheard of. You know, you could seek out and find these stories, but it’s the same thing with all the drone attacks that killed all the civilians in the Middle East under Obama. When a Democrat does it, well, we can excuse it somehow. We can come up with, but he really just wanted to get the terrorist. But then you switch it the other way. A Republican does it, it’s awful. The domestic spying under Obama.

Mike Papantonio:             Yeah. Well look, we got a few minutes. I mean we’re all, I want to talk about this because I’m so damn tired of getting emails from people. Oh Pap, you’re just, you know what have you turned into a Republican? No, I’m not Republican and no, I’m not conservative and no, I’m not a Democrat. I am really simply trying to tell stories that we have, we, we’re unable to tell anymore for many reasons. One is this tribal mind.

Everybody hates Trump’s so badly and there’s good reason for that. There is very good reason to say, my God, this guy is, he’s an abomination. Good reason for that. But in the process, we can’t become so tribal that we can’t tell stories without being attacked, for telling a story, telling a story. So what we’re talking about here, very, very interesting, very interesting conversation because for years we just kind of let Obama do what he wanted to do because wow, he’s charming. You know?

Farron Cousins:                  Or because he made these lofty promises that really for the most part, like on the environment, on drilling, on Wall Street, it was all talk. And with the domestic spying thing, it actually grew under Barack Obama from what it had been under George W. Bush, when all those same Democrats were talking about 1984 and George Orwell come to life because of domestic spying. Obama comes along, increases it, and they say, well.

Mike Papantonio:             When he makes Amazon an extension of the US government where they’re able to spy on, that was, that happened when he was president. It nevertheless, look, here’s the point. He’s moved up, Obama moved us to this area that it ain’t that great. Now we got Trump who’s going to capitalize that and move us even further to this, to Crazyville.

Farron Cousins:                  Well, and you know what, you can, if you excuse the behavior of your guy because he’s your guy and the program’s your guy puts in place, you have to remember that you don’t know who’s coming down the pipe next.

Farron Cousins:                  And he may hand the keys over to the Lamborghini that you excused him buying over to somebody, you know, who’s drunk at the wheel, which is basically what’s happened now. The, the immigration policies, the spying, the fracking, the drilling, everything else was really bad under Obama and he handed all of those powers over to somebody so much worse. But if we would’ve had outrage back then and stopped it, curtailed it somehow, maybe we wouldn’t be in the position that we’re in today.