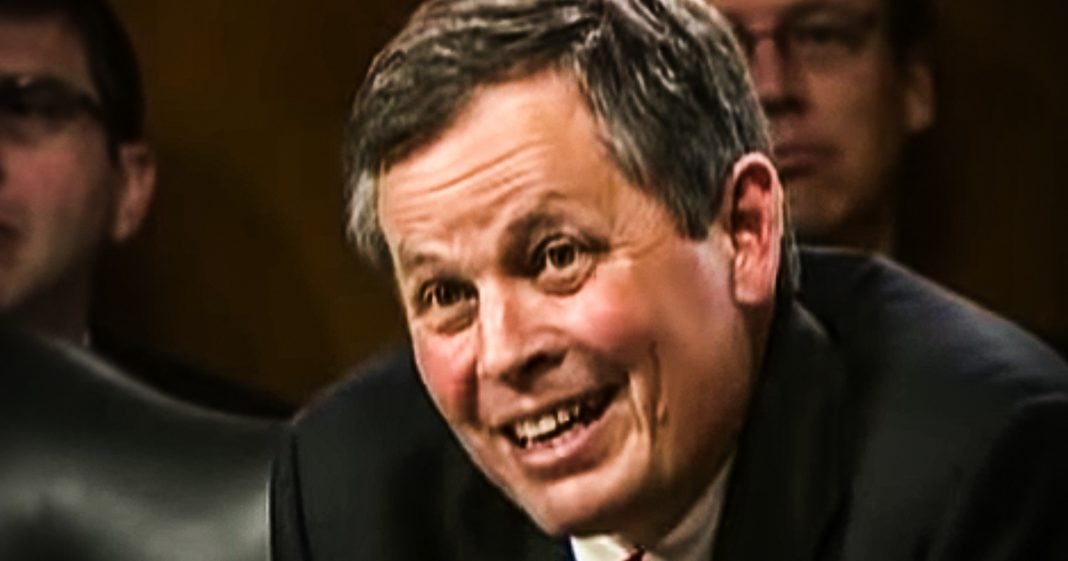 Republican U.S. Senator Steve Daines wants everyone to know that he loves capitalism, and he’s put forth a resolution in the Senate to prove it. Daines’ resolution would formally condemn “socialism” while also declaring that capitalism is the best economic system in the world, obviously ignoring all the glaring problems this country is facing thanks to unfettered capitalism. Ring of Fire’s Farron Cousins discusses this.

Republican Senator Steve Daines from Montana recently made headlines when he tweeted out the following. He said,

” Montanans are sick and tired of listening to anti-American, anti-Semite, radical Democrats trash our country and our ideals. This is America. We’re the greatest country in the world.”

And He tweeted that out in response to Donald Trump’s tweet about the squad telling them, uh, if you don’t love America, you need to go back to where you came from. Steve Daines, who most people had never heard of prior to that tweeted out the following. He got himself in some headlines and now Steve Daines with a little bit of popularity on his face, introduced a resolution on Monday in the US Senate condemning socialism. Here is a specifically what Daines had to say.

“A radical, socialist, far-left movement is growing across this country. And it has taken root as the new voice of the Democratic Party … Today we make a choice. Freedom or Socialism. I choose freedom.”

Such a patriotic speech, man almost belongs in Independence Day, right? Right after the president’s moving speech, I choose freedom over socialism. Here’s the thing, bud. You acknowledge in your little quote right there that there is this a far left movement growing across the United States. It’s not just localized to the members of the House of Representatives. It’s not just a few ultra-liberal cities here in the United States. It’s across the board. Hell, we’re even seeing it in some conservatives in this country. When you present them with a hugely progressive democratic socialist policy like Medicare for all or green new deal, they actually support it. So even your precious conservative base, they’re starting to open up to the idea that, you know what? Capitalism’s kind of screwed us all over. Maybe this isn’t a great now that was just a quote from Daines that is not part of the official resolution, but the resolution calls capitalism quote, the greatest engine for human advancement in the history of the world, bringing more people out of poverty and end of prosperity than any economic model in the history of mankind.

Now those are words from the actual resolution itself the Daines has put forward to condemn socialism and praise is capitalism. Here’s the thing though, Steve Daines doesn’t understand what’s actually happening in this country and what’s happening in this country right now is that capitalism has failed us. That that’s why we have one and a half trillion dollars of student loan debt. That’s why we have health insurance companies out there writing letters saying, hey, sorry, your kid has cancer. We don’t want to pay for that because it’s going to be expensive. Uh, would you like a brochure of tiny baby coffins to look through because that’s what you need. That’s capitalism folks. Democratic Socialism, not the socialism that idiot Daines is describing of, oh, it’s going to, we’re going to lose all our property rights. He said, Daines is obviously trying to get a little bit more attention. He’s trying to go out there and further condemn the word socialism to scare more people into voting for Republicans in 2020 but the truth is that most people in this country can look around them and understand that capitalism isn’t working the way it’s supposed to.

There was a time in this country, believe it or not, when we had capitalism that actually worked, and capitalism can work and capitalism can be great, but not when Republicans are involved. Capitalism works when you have strong governmental regulations to keep things in check. And that includes in many instances, price controls. The government doesn’t have to control the industry, but they could dang sure tell you that you can’t price gouge American consumers. Capitalism works when we have very strong labor unions in the United States fighting for worker protections and worker benefits and worker pay. Take those two things away. And you basically have the Republican wet dream of what capitalism is today.

No regulations, no worker protections, nobody out there fighting for the average human being. All the money going to the top, none of it trickling down. And that is why capitalism today is failing. And that is why people gravitate towards these better ideas, these democratic socialist ideas of saying, you know what? Why don’t we do what almost every other industrialized country on the planet does and give our people universal healthcare. Everybody else does it. Why can’t we? That’s all we’re saying. Plenty of other countries have debt free college. Why don’t we do the same if we want to say that we’re better than everybody else, as Trump says, as Dane says, as most Republican says, then why are we letting everybody else get ahead of us on these issues? Why are we so far behind on taking action on climate change? Which Daines by the way says that the green new deal is evil socialism.

We’re falling further and further and further and further and further behind everybody else in the industrialized world and it’s because of this false belief that capitalism is going to solve all of our problems. It could have if republicans had never existed, but they do exist. They’ve corrupted the system and now it’s got to be changed to something else. I believe it is too far gone to fully be salvaged and taken back to the glory days of what FDR had in this country. Instead, we need radical, systemic and rather immediate change in order to fix this country and about. The only way we’re going to get that is through these democratic socialist ideas that other countries have been using for decades, and it seems to be going just fine for them.