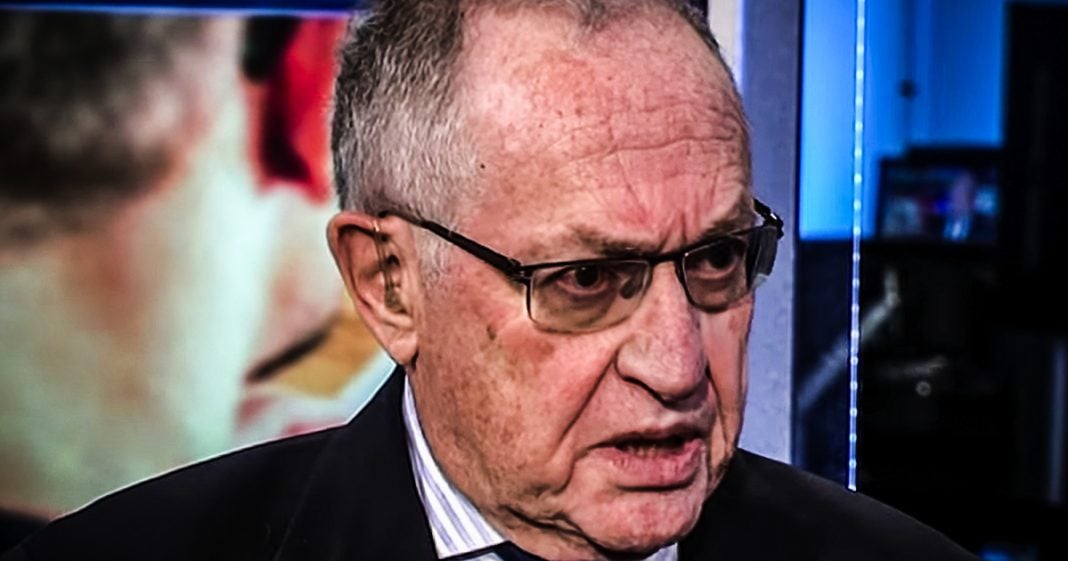 When you’ve been accused of inappropriate sexual activities with a minor, it probably isn’t a good defense to go out and publicly advocate lowering the age of consent. But that is exactly what lawyer Alan Dershowitz is doing right now, all while claiming he’s totally innocent and his accusers are liars. He has the right to remain silent, and he really should think about doing that, as Ring of Fire’s Farron Cousins explains.

Alan Dershowitz as a lawyer should understand that he has the right to remain silent. I mean after all, ever since these new Epstein charges and allegations came, uh, came forward along with the allegations against Dershowitz himself, you would think that Dershowitz would want to do the smart thing and just say, you know what, I’m not going to say anything. This whole thing is ridiculous. I wasn’t involved. I’m done with this conversation. But instead Dershowitz has repeatedly made the situation so much worse for himself and Monday might possibly be one of the worst days that Dershowitz has had, and he basically also forked over some evidence that I’m pretty sure prosecutors are going to want to use if he ever does get charged. Here’s what happened back in 1997 Alan Dershowitz writes an op-ed for the LA Times arguing that we should lower the age of consent, you know, so that younger people can legally have sex with people.

That’s what Dershowitz was trying to argue in 1997 in this op-ed. Well yesterday that op-ed resurfaced and rather than Dershowitz coming out and saying, listen, that was 22 years ago. I was basing it on some kind of science. I had no, no, no, no. Dershowitz decided to dig his heels and really just doubled down on a hell. Yeah, we should let little teenagers start having sex with whoever they want. He sent out the following pair of tweets to defend his 22 year old op-ed.

“I challenge my readers to distinguish the cases, as a matter of constitutional law. I did not suggest that it is moral to have sex with a 16 year old, but rather that the issue presents a constitutional conundrum worthy of discussion. 2/”

Um, here’s the thing. Uh, that’s not a constitutional conundrum in, in any way, shape or form. I know you want to pretend like you’re this great super lawyer and this Harvard professor by, Oh, I’m going to throw out words and maybe it’ll confuse the average person out there on Twitter if I use big legal words. Yeah, it didn’t fall anybody. They all thought, wow, this guy’s a perv. And pretty much the argument you were making there, Alan, this has nothing to do with constitutional law. This has nothing to do with oh well, if they can get all abortion without having to talk to anybody, why can’t they have sex with me or anyone else? Here’s the thing though, bud. Uh, in more than 30 states across this country, you can’t just walk in and get an abortion if you’re not 18 years old. You have to have that parental consent. So your argument on its face with a very easily Google-able fact is false.

You should know that though. I, here’s the thing, Alan Dershowitz is not an idiot. I know he’s acting like one, but he’s not. He’s a very smart individual. He knows the truth. And he is out there tweeting these outright lies that he knows are lies because he realized, Oh crap, this 22 year old op-ed I wrote is coming back to haunt me. I’m trying to deny that I ever had sex with an underage girl and here I am 22 years ago arguing that it should be legal to do so. What am I going to do? Dershowitz thought. I know the best ideas I’m going to keep on digging in this hole. Get myself further down there because I don’t know anybody better because I’m backed into a corner. That’s what’s happened to Dershowitz right now. He is not thinking like a decent lawyer. He’s not even really thinking like a lawyer at this point. He’s thinking like somebody who’s terrified of what is coming around that corner and he has no way out. Again, Dershowitz has not been formally charged with anything at the moment. He has been accused and he denies it. Uh, all around. He kept his underwear on. He tells us, no, I wasn’t arguing that op-ed that I wanted to have sex with kids. I just thought it should be legal to have sex with kids. Yeah. None of this looks good for you, Alan. And again, if I were you, I would definitely exercise my right to remain silent because the more you talk in, the more you tweet, the worse it’s looking for you.