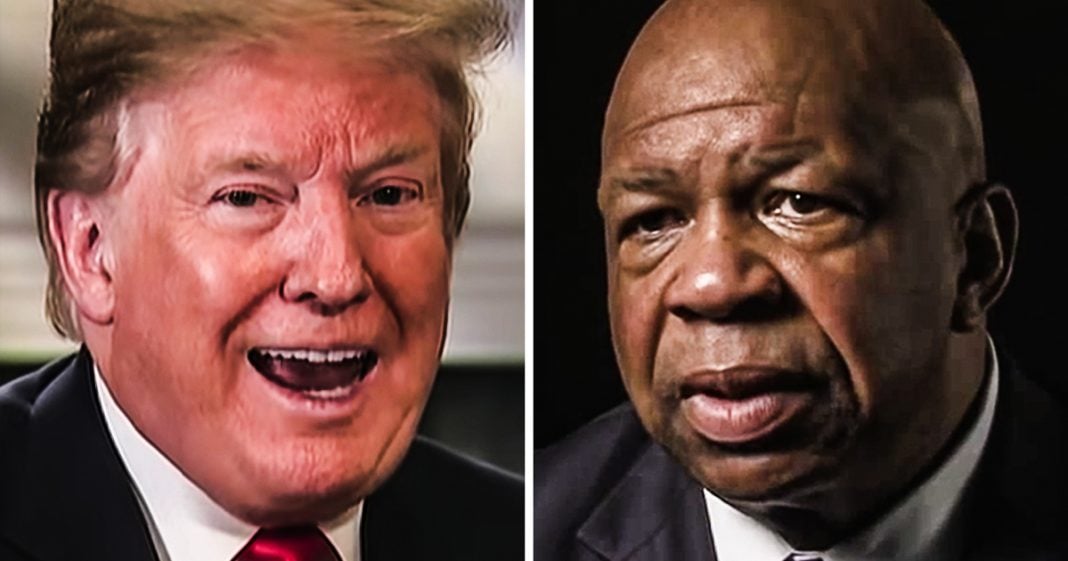 We’ve now entered the third straight day of Donald Trump’s attacks on Democratic lawmaker Elijah Cummings, with Trump consistently tweeting out completely false accusations about Cummings and his district. The President always seems to reserve his most vicious attacks for lawmakers of color, and that isn’t a coincidence. Ring of Fire’s Farron Cousins discusses this.

So Donald Trump has now spent the last 72 hours at attacking both representative Elijah Cummings and the city of Baltimore itself. Earlier this morning, the a attacks kind of shifted a little bit away from Elijah Cummings. He is now going after reverend Al Sharpton, a little bit more viciously, but we did basically have 72 hours’ worth of attacks on Elijah Cummings and again, the city of Baltimore during which Donald Trump of course tweeted out. Nothing but lies. Yeah. He tells us that, uh, Baltimore is very dangerous and filthy place where no human being would want to live. Says it’s infested with rodents and everything is crumbling. And Elijah Cummings has done absolutely nothing to help the poor city of Baltimore in 25 years. Well, first and foremost, let’s get something out of the way. The none of that is actually true, right? I mean, Donald Trump wants to paint Baltimore as the biggest hell hole here in the United States.

And in reality, it’s not even close. Actually. Baltimore’s pretty decent. Their crime rate a little bit higher than the national average. However, not even near the highest here in the United States at all. Not even close. Yeah, they take federal money, but they don’t take as much federal money as most, uh, major cities in red states cause they don’t need it. But those red states do because they’re actually falling apart. Not to mention the fact that a, the city of Baltimore also happens to be, or the district, I should say a 53% black and 36% white. So this isn’t just Donald Trump attacking Elijah Cummings district. It’s Donald Trump attacking a majority black district. And there we get a little bit more of the puzzle put together. Right? That’s what this is all about. You know, Donald Trump always seems to reserve his most vitriolic tweets and insults for people of color.

In fact, in one tweet, he nailed them both here he says,

“If the Democrats are going to defend the Radical Left “Squad” and King Elijah’s Baltimore Fail, it will be a long road to 2020. The good news for the Dems is that they have the Fake News Media in their pocket!”

He also likes to go after Maxine waters routinely calling her low IQ Maxine, and now he’s going after Al Sharpton. What do all these people have in common? They’re all nonwhite. That’s what’s happening right here, ladies and gentlemen. That is what this is about. Donald Trump, at one point, one of the tweets went as far as to call Elijah Cummings a racist. Now he’s not only attacking Elijah Cummings and the city of Baltimore because it’s a Elijah Cummings is African American. Majority of people in a Cummings district are African Americans.

That’s not the only thing. It’s about here. What it’s also about is the fact that Elijah Cummings, with his position in the House of Representatives, is going after Trump and his family pretty hard and Donald Trump is very scared. So like a terrified little rat. Donald Trump is lashing out and he’s lashing out and very racist and demeaning ways. You know, there’s no other way to classify this. This is Donald Trump. Once again, getting even say once again, Donald Trump’s still being a racist. That is what these attacks are. They’re completely false. I mean, if you want to talk about places that are falling apart, how about the fact that the United Nations spent time touring the state of Alabama and said they’re experiencing the worst poverty in the industrialized world? Uh, that state’s been pretty solidly controlled by Republicans for well over a decade, folks. And it’s basically a third world country here in the United States according to the United Nations, other red states, poverty through the roof, Kentucky, you know, with their senators, Rand Paul and Mitch McConnell, highest rate of cancer in the United States and highest cancer mortality rates.

So not only do the people in Kentucky, are they more likely to get cancer, they’re also more likely to die from cancer. But I don’t see Donald Trump tweeting out about that because Ron Paul and Mitch McConnell both happened to be white. There really are some places in this country that need help and their elected representatives are not giving it to them. But Elijah Cummings, district city of Baltimore, that a knit, there are red state representatives and senators out there whose homes are falling apart, and these people do absolutely nothing except chat, build the wall and do whatever they can to lick Trump’s boots because that’s all they know how to do.