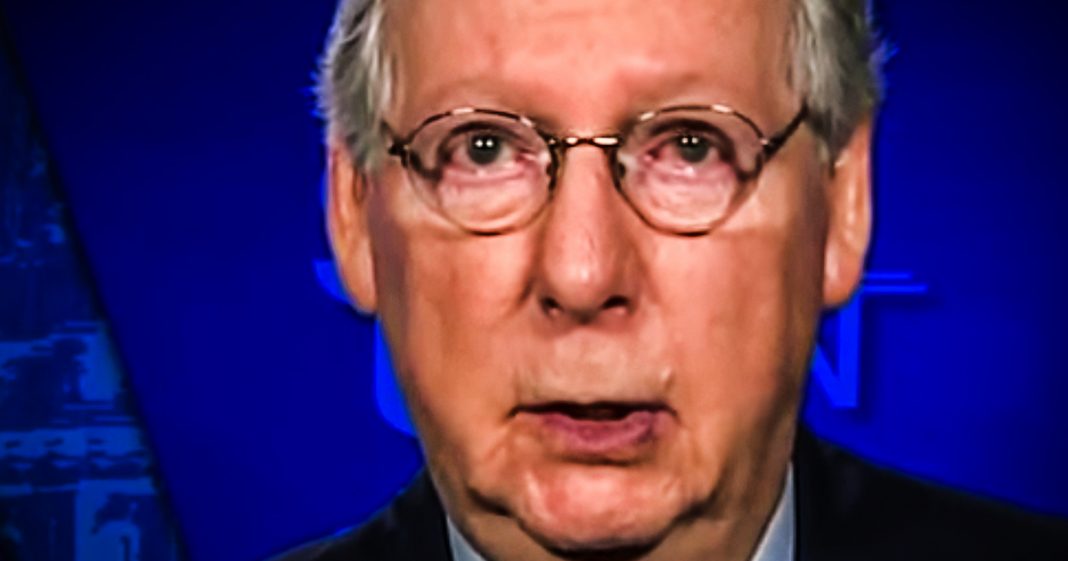 Mitch McConnell recently explained his decision to NOT secure our elections, saying that the bills were obviously partisan in nature. But they only asked for money and action to prevent election interference, and if that is a partisan issue, then that means that McConnell thinks his Party will lose more elections if they don’t get outside help. And the crazy part is that he’s actually correct, as Ring of Fire’s Farron Cousins explains.

The biggest takeaway from Robert Mueller’s testimony last week is that there are attacks happening right this very second to our election systems here in the United States, Mitch McConnell, both before and after Robert Mueller’s testimony, has had multiple different opportunities to bring bills that would ensure the protection of our election systems for a vote. Mitch McConnell on at least four, maybe even five occasions at this point, has refused to do so and last week, even after Mueller said, hey, it ain’t just Russia, other countries are doing this too. They’re all following the same playbook. We’re super vulnerable. They’re going to change our elections. Even after that, Mitch McConnell said, no, I’m not going to do that. I don’t care. I know the House passed their version, but why would I do this? Mitch McConnell says in a little briefing after he refused to do this, when asked by the press, he said it had to say the following,

“Clearly this request is not a serious effort to make a law. Clearly something so partisan that it only received one single solitary Republican vote in the House is not going to travel through the Senate by unanimous consent.”

So according to Mitch McConnell, protecting our elections is a partisan issue because let’s make something 100% completely clear here. There was nothing in this legislation that basically gave Democrats in upper hand, although Mitch McConnell thinks there is, because here’s what the legislation would have done. Secure our voting systems from foreign hacking, allowing every American to vote, making it as easy as possible for Americans to vote and ensuring that all votes count equally. And Mitch McConnell thinks, thinks that’s partisan, thinks this is some democratic ploy to get more people to vote for him. And I guess technically he’s right, Mitch. Mitch, you’re right. You got one right buddy.

Because if we protect our election systems, if we allow more people to vote, Republicans are screwed because that’s why they’ve been ignoring this problem for years. They know how screwed they will be. You know, as I have said, multiple different times here in this chair right now, every time, every time we see some kind of voting irregularity in this country, going all the way back to the year 2000 every time it somehow benefits the Republicans. First it was just ballots in Florida and it was ballots and votes switching up in Ohio, voting machines in Florida and Ohio screwing up. Then you saw them in Texas. Hell, we saw it as recently as the 2018 midterms down there in the state of Texas where people said, I kept hitting Beto O’Rourke and it changed it to Ted Cruz because every time it benefits the Republicans, and that’s why Mitch McConnell doesn’t want to take action.

That’s why you only got the one single solitary vote from a Republican in the House of Representatives on this piece of legislation. Not because it contained massive giveaways for Democrats, but if you actually took election protection seriously, Republicans would basically lose their majorities forever. The majority of voters in this country do not want Republicans, but unfortunately the majority of people in this country don’t vote some because they can’t. Some because they’re afraid to, because Republican voter intimidation tactics are keeping them away from the polls, threatening them saying, well, maybe you have a warrant out. Maybe they’re going to come arrest you. Maybe you went to jail, but you weren’t convicted of a felony. But they tell you that if you went to jail in general, you lost your right to vote even though you didn’t. So if you do vote, you’re going back to jail. Those are things that happen. Those are things we have been talking about on this program for 15 years, folks, this isn’t our first day talking about this, and unfortunately, as long as Republicans like Mitch McConnell are calling the shots, it’s not going to be our last day talking about this either. But Mitch McConnell just gave us a massive boost last week with his little admission that, yeah, if we protect elections, it’s going to be a really big help for the Democratic Party.