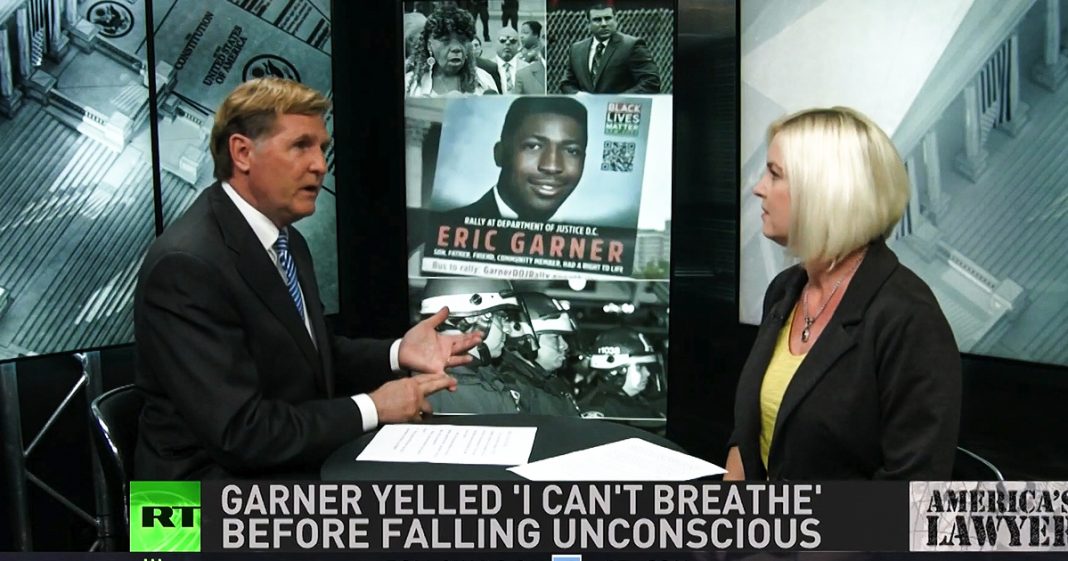 Via America’s Lawyer: Mike Papantonio and legal journalist Mollye Barrows discuss the closing of Eric Garner’s case, stemming from his death by chokehold back in 2014. Though widely-circulated video shows NYPD officer Daniel Pantaleo slamming Garner to the ground in a chokehold, it turns out Pantaleo will not end up being charged by federal prosecutors for misconduct on the job.

Mike Papantonio:             Federal prosecutors won’t be charging the officer directly involved in the 2014 death of Eric Garner. The footage of the police aggression during his arrest and Garner’s dying words of “I can’t breathe,” have since reverberated across the country. Legal journalist Mollye Barrows is with me to talk about it. Mollye, you know, this is a perfect story for you as the anchor in news for so long, you covered more of these in Florida than most people.

Mollye Barrows:                Yes. A senseless killing of unarmed black men by law enforcement. It goes to the use of abuse of use of force when it comes to law enforcement. I think that that’s one of the rallying cries that’s come out of this case. And like you said, it’s no real surprise that the Justice Department decided not to press charges, criminal charges against this one particular officer who held Eric Garner in a choke hold in 2014 on the streets of New York. Basically, in a nutshell, they were talking to him about whether or not he was selling single cigarettes without tax stamps. It’s something that he had been arrested for before.

He denied it, accused them of harassing him. One of the, this officer Daniel Pantaleo, who was 29 years old at the time, goes to put his wrist behind his back, Garner pulls his hand back. He basically puts his arm around his throat, throws him to the ground, and by the time he takes his arm off, he said he held it there about 15 seconds, according to the cell phone video, which was taken by a bystander. Then he holds his face down, but it was that 15 second chokehold that inevitable…

Mike Papantonio:             The last thing, the last thing before he totally lost his ability to breathe, was saying, “I can’t breathe.”

Mike Papantonio:             Okay, so, so you’ve got the chokehold. The problem is most of the officers who do this wrong simply don’t have the sense to understand what they’re doing. What ends up happening is their, the adrenaline is flowing. They already have anger issues.

Mike Papantonio:             They’ve been poorly trained, they’re too young to really understand the ramifications of this. And the chokehold goes bad and this young man dies for, let’s say he was selling a cigarette. I mean, come on.

Mike Papantonio:             Okay. So what I love about this is at least the prosecutors got behind this case.

Mike Papantonio:             And the investigators got behind this case and they tried to prove this case. What is your take on how in the world he, the officer just walks?

Mollye Barrows:                It’s just another example of William Barr essentially not supporting, you know, and he was actually supporting some New York federal prosecutors who felt like that they couldn’t successfully prove that this officer willfully committed an action that caused him to die. So that’s what they felt like they couldn’t prove. But…

Mike Papantonio:             The intent is a tough thing, to say he set out to kill this man for whatever reason. That’s the problem.

Mollye Barrows:                Yes. But the chokehold is illegal against New York City police department policy. He wasn’t supposed to use it. And Pantaleo…

Mollye Barrows:                Exactly. And Pantaleo denies that he did choke him. And the medical examiner said, well, and they had competing medical examiner reports like they like to do and the, the New York federal prosecutors cherry picked, which medical examiner testimony they wanted to use in order to decline pursuing those criminal charges against Garner. And so this week is actually the five year anniversary of his death. And it was right after, it was right before his death that you had George Zimmerman that was exonerated for killing Trayvon Martin and you had the Ferguson shooting in Missouri. And that led to the Black Lives movement as well.

Mike Papantonio:             Have, have you noticed there has been, it’s slowed down or is it my imagination? I mean, I follow these stories constantly. Maybe it hasn’t, but I, I guess to, as much as I can follow these day to day, which I try to do, it seems at least slowed down a little bit. What is your take on that?

Mollye Barrows:                You know, I think that’s probably true. That’s a great question. I would love to be able to take a little time and dig into some research and see if there’s statistics to back that up. But I, you know, covering, like you said, news here in northwest Florida for years, we live in a county where they’ve never had a, a justified, an unjustified officer involved shooting. They’ve justified them every single time. But I can tell you behind the scenes that any law enforcement authority who’s in charge, they don’t want that on their record, on their legacy. They don’t want the unwanted media attention.

So you may very well be right, whether it’s LA, New York, Missouri, Florida, any place where there’s been a high profile, controversial attack against an unarmed black man by law enforcement. You tend to, have a tendency to see that if for no other reason PR wise, they want to back away from that and maybe give a message to the troops on the ground, do what you gotta do. And then you had the push back from law enforcement saying, well, we’re following policy.

We can’t put our own lives in risk if we’re being, you know, asked to go light on these folks. But at the same time, when you see video like what you saw with Eric Garner, that’s completely unacceptable. And when they use the law to defend it, as opposed to using the law to prosecute him, that’s when people have doubts in the justice system.