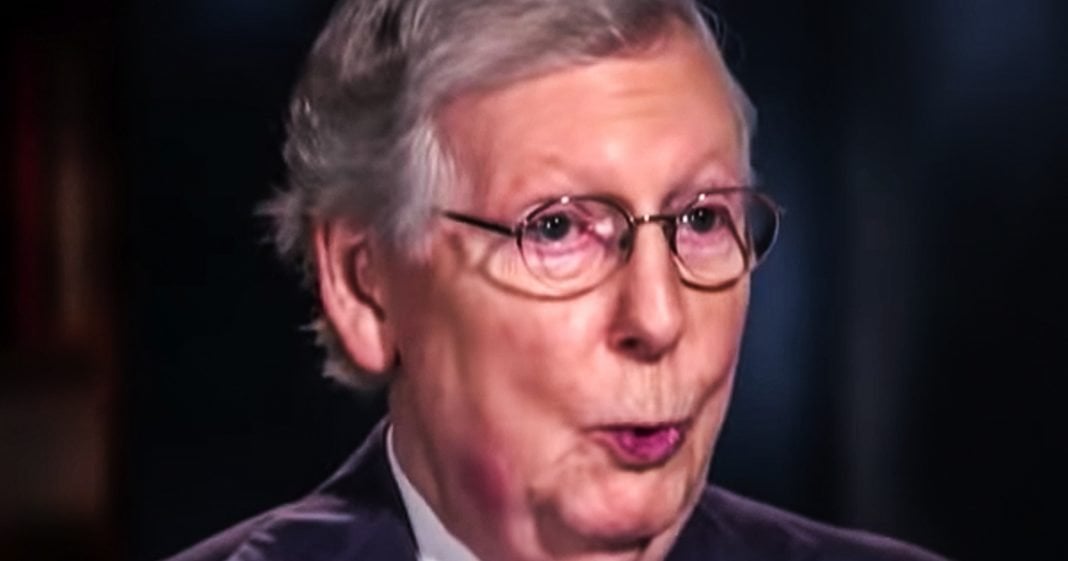 This week, more than 100 coal miners from McConnell’s home state of Kentucky – all of whom have black lung – showed up at his office to ask him what he’s doing about their health. McConnell didn’t even spend one minute with these workers who had traveled for half a day on a bus to meet with him. This proves that Republicans don’t care about their own constituents, as does every policy they introduce, as Ring of Fire’s Farron Cousins explains.

Earlier this week, Mitch McConnell proved once again what a disgusting and horrendous human being he truly is. Here’s what happened. Earlier in the week, you had 120 coal miners suffering from black lung along with their families who took a bus from Kentucky, Mitch McConnell’s state to Washington, DC they were supposed to meet with Mitch McConnell. All of these former coal miners were all suffering from black lung and they were going to talk to McConnell about the fact that the coal miners, a black lung fund wasn’t getting enough money. Earlier this year, Congress passed, it had been $1.55 tax on coal companies for every ton of coal they produced had to go into this fund. But earlier this year, Congress voted or didn’t vote, excuse me, at all, and they let that expire. So the number went back down to 1970s levels. So it’s only 55 cents per ton of coal.

So basically this black lung fund for coal miners is running out of cash and that is what these coal miners took a 10 hour bus ride to go talk to Mitch McConnell about. So what did Mitch McConnell do? Well, according to the coal miners who were there, he stayed for less than two minutes and left. Here’s what one of them had to say. George Massey, um, minor from Harlan County, Kentucky said

“We rode up here for 10 hours by bus to get some answers from him because he represents our state. For him to come in for just two minutes was a low-down shame.”

Mitch McConnell himself is a low down shame. You I have said repeatedly, you know, not just horror audience, but hopefully speaking directly to the people of Kentucky. Um, you have one of the worst cancer rates in the United States. In fact, I believe it is actually the worst cancer rate in the United States. It may have changed. I haven’t looked at the statistics in six months, but last I checked, your state was the worst. You’ve also had Mitch McConnell representing you for a couple of decades. At this point and he’s done nothing about it. He keeps telling us. He kept telling us during the Obama administration, there was a war on coal. Obama wants to kill your jobs. That wasn’t true, and Mitch McConnell pretended like he was fighting for you. But when he was confronted here, when he was given an actual fight to go have for you, he literally ran away. He ran away because he doesn’t care.

Mitch McConnell does not care about any of his constituents who are dying from incurable black long because he refused to allow the Obama administration to actually carry out a war on coal and the state over to renewable Kentucky Code have become just like any state in this country. It’s still up for grabs. You could’ve become the leader in renewable energy. You could have, but instead the coal companies who are now going bankrupt because there’s no demand for their product. They funded politicians like Mitch McConnell who went to Washington DC to fight investments in renewable energy, to fight cleaning the environment, protecting these coal miners and compensating them for these horrible deadly diseases that they have contracted. Because of the job that they held. Black long is not a disease of the past folks. It is still very real and very common here in the United States amongst coal miners and Mitch McConnell coming from a coal dependent state understands that. But as this week’s little stunt proved, he simply doesn’t care.