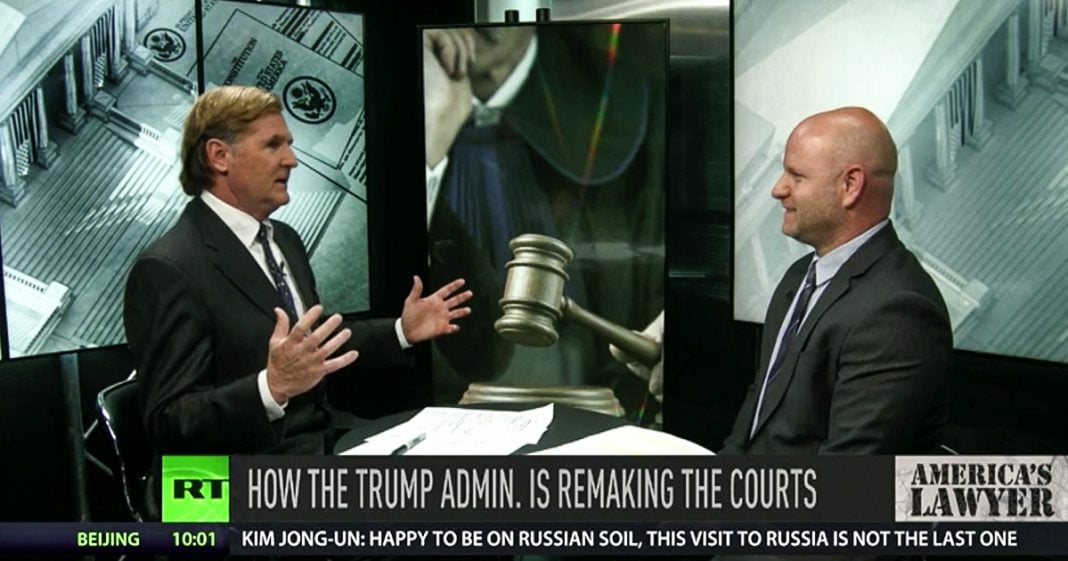 Mike Papantonio:             The Republican Party has finally completed their takeover of the court system and that’s not just speculation. That’s exactly what the chairwoman of the Republican Party recently announced in an op ed. I have Farron Cousins from the Trial Lawyer Magazine with me now to explain what’s happening. You know what’s so amazing, this is a story we’ve been telling for years and we would, our, our, our position was why are the Democrats so interested in a local legislator when anything that the legislator writes, anything that that favorable senator writes, anything that Democrat or Democrat legislators, senator writes or Democratic president creates, can be taken away by the court system. And they never got it. And so now all of a sudden this Obama cat comes out and says, yeah, we really blew it this time. You think? What’s your take on this?

Farron Cousins:                  The same day that Ronna McDaniel, the chairwoman of the RNC came out with her op-ed congratulating Trump on the 93 federal judges that he has appointed, 37 circuit court judges, 54 district judges. The same day that came out, you had Christopher Kang, who was one of the lead attorneys on judicial nominations for Obama, he came out with his op-ed that said, listen, be mad at Republicans for taking over the courts. But I’m going to be honest, we, the Obama Democrats deserve a lot of the blame because we let it happen. We didn’t fight. We tried to play the middle and look what happened. We lost.

Mike Papantonio:             I like this, this story that was done by the Hill is very insightful. You know, they did a nice job understanding the story and what they focused on, what I think is remarkable about this is they kind of got it. Even when the Democrat advisor to Obama on the court system, the guy who really blew it, now they’re going to say, oh no, he didn’t have a chance. No, he had a chance. He had two years worth of a chance to fill 57 slots and he didn’t do it. Okay. Why? Cause he was reaching across the aisle. We’re going to get along just fine. I’m, I’m Obama. I’m the consensus builder.

Well, so the next thing that they, about this story that’s so interesting is it kind of points out that Democrats, when they make an appointment, it’s all about social issues. Abortion issues, gender issues, but they miss consumer issues. They missed the fact that corporations are killing this country and the people they appoint as judges all come from that corporate background.

Farron Cousins:                  And you’re going to be hard pressed to find any consumer friendly judge in this country that is not also great on social issues.

Farron Cousins:                  But instead, what they did, and, and Kang admits this in the op-ed was basically say, all right Republicans, here’s our person. Yes or no? No. Okay, well we’ll go find somebody more to the right. But they find people to the right who are good on a couple social issues. So they sell to Democrats, but they’re also judges who are going to say, listen, I’m going to side with an oil company every time. I’m going to side with the chemical giant, with Wall Street banks, but I, I might go the left on abortion, maybe. And that’s what they went for because they thought Republicans would be okay with it and Republicans still said, no. Give us somebody worse.

Mike Papantonio:             Let me, let me just tell you something. With the ninth circuit, California ninth circuit has an unprecedented 13 Republican appointed judges. Buddy, you’re in trouble. That at one point was the most liberal circuit in the country. Not Anymore.