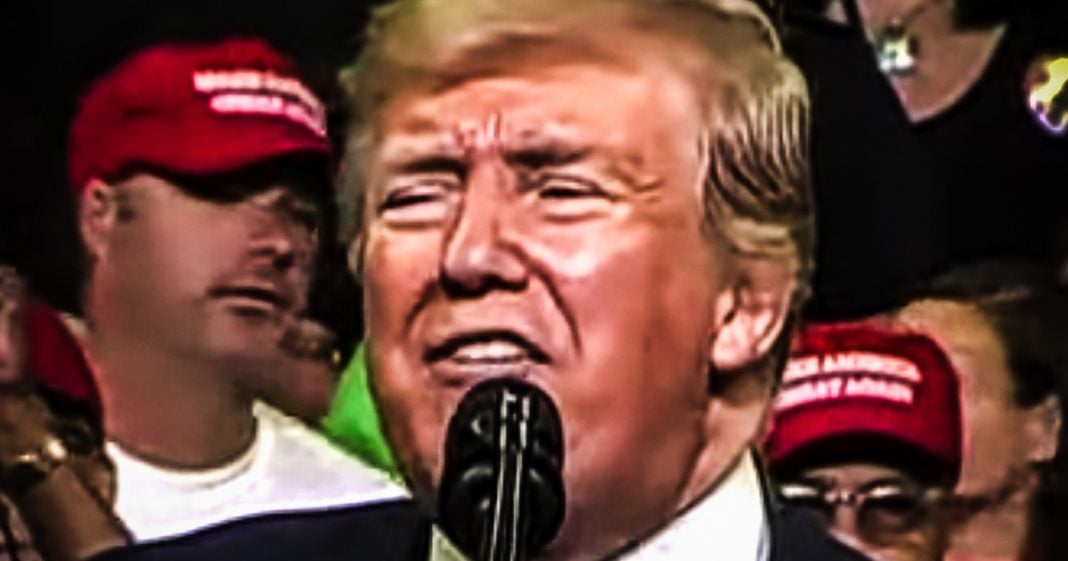 According to a new poll, Donald Trump has lost the support of a majority of Independents, and more than half of them now say that they would NEVER vote for Trump in 2020. If this holds, Trump has no path to victory in 2020, with the exception of outside election interference, which is obviously a very real possibility. But Democrats can also screw this up, as Ring of Fire’s Farron Cousins explains.

According to a new NPR News Hour Marist poll, Donald Trump has virtually zero chance of getting reelected in 2020 this poll did not specifically ask whether or not Donald Trump has a chance of winning, but what this poll did was it asked independence, are you going to vote for him? And 54% said no way, but here’s what’s great about that. 54% of independents who say they’re not going to vote for Donald Trump. They didn’t say they’re not going to vote for Donald Trump. They said, and the language and wording is important. They’re going to vote against Donald Trump and believe it or not. Yes, those two things are difference. Not Voting for somebody versus voting against somebody. Not Voting for somebody means that you prefer the other candidate over this one. Right? Voting against somebody means that you hate this person so much. You’ll do whatever it takes to make sure they lose no matter who the other person is.

That’s important. That is a distinction that people need to understand. The poll also showed that 33% of independence said, you know, vote for them. So right now Donald Trump is rocking an approval rating among Republicans of about 70% he’s got about 33% of independence. Any thinks that’s going to be enough to carry him to election day? Now, I’m not saying the other 30% of Republicans who do not approve of Donald Trump right now are going to vote democratic. What I am saying is that they’re going to be less energized, less enthused, and they may be the ones like Democrats in 2016 who just say, you know what? Screw it. I’m staying home. I got better things to do on this Tuesday in November, then to go vote, whatever happens, happens and I’ll just bitch about it either way, and that’s what we’re looking at right now.

I say right now, of course, because these numbers are going to change wildly between now on election day, most likely. Of course, if Donald Trump continues being the piece of crap that he is, if he continues to hoodwink a good portion of this population claiming one thing while they’re living in a different reality, you know, they see the economic harm that he’s causing to them. And he tells them he’s not. And they understand like, wait a minute. No, you are. I can see it. I see it in my paycheck. I saw it in my taxes. You are lying to me. If he keeps that up, then I think those numbers really going to stay the same or they’re actually going to get worse for him.

But if he somehow, and I think there’s 0% chance of this happening, but if he somehow gets visited, I don’t know, maybe by three ghosts in the middle of the night and grows a conscience and a soul in releases kids from cages and actually stops this trade war and stops attacking members of Congress and other people throughout this country stops race, baiting his base, then maybe, maybe he can fix his poll numbers. But again, short of the three ghosts, that’s not going to happen. He has had plenty of time to change that. He has seen his approval rating struggle desperately to even hit the 50% mark, which it still hasn’t. And losing independence is the one thing that will 100% cost him the 2020 election.