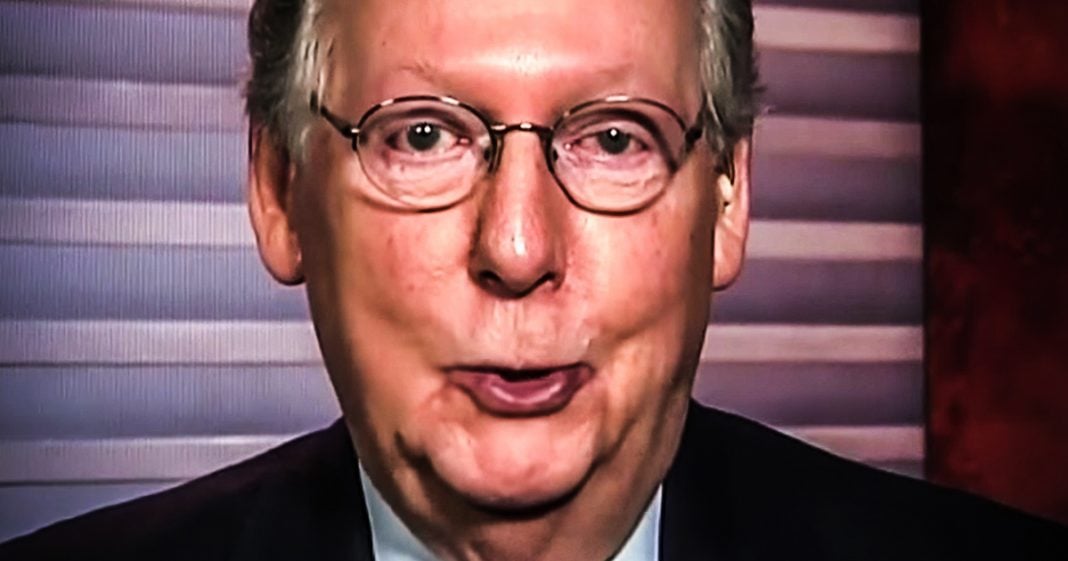 Every attempt at either securing more funding or enacting stricter standards for our voting systems here in the US has been stifled by Republican senate majority leader Mitch McConnell. The man refuses to take action, even though there is broad bipartisan support for actions to secure our elections, but McConnell believes it is in his best interest to just let things go to hell. Ring of Fire’s Farron Cousins discusses this.

A lot of polls right now are showing that Donald Trump would lose reelection in 2022 Joe Biden. He would lose the Bernie Sanders. He would lose to Elizabeth Warren, he would lose to Kamala Harris. He would also lose to Pete Buttigieg at the moment. But none of those polls matter whatsoever. Not only because they’re going to change from here to election day, but also because Mitch McConnell, Republican Senate majority leader has repeatedly blocked any effort whatsoever to secure our election systems ahead of the 2020 presidential election. Our elections can easily be stolen. Now, recently, a democratic representative, Adam Schiff did an interview where he was talking about, you know, oh, we haven’t secured our election system. And, and, and Facebook, you know, they can still take out all the ads on Facebook and, and Russia may hack into our systems. And, and I’m, I’m coming up with all these horrible things that, uh, you know what they, they happened.

We know that they happened, but he has to stop pretending like those are the only threats. And that’s what’s pissing me off about Adam Schiff. People need to understand that. We have been talking since 2004 when bring a fire began about the very serious vulnerabilities in our voting systems. This was before Russian hacking or Facebook even existed. By the way, this was a problem before Facebook was even a thing that we were talking about because people like Brad Friedman would come on our show and tell us about the dangers of it, but no, now suddenly it’s only because of Russia. No, listen, we know, and I’m going to hammer this point every day until Mitch McConnell decides to give us more money for security. We know that 11 year-olds are talented enough to hack into our voting systems and start changing votes and purging people off the voting rolls. That is a thing that has happened.

You have had Democrats and Republicans come together in both the house and the Senate and say, listen, we know we’ve got problems. We know these votes can be changed. We know the voting rules can be changed. We need accountability. We know that voting machines are not regulated, but every single time in the last year that this has come up in that Democrats and Republicans have tried to work together to do something about it. One man has said no, and that man is Mitch McConnell. And the reason is because Mitch McConnell knows that every single time, at least for the last 19 years, that something’s gone screwy with a voting system. Somehow it always seems to benefit the Republican Party.