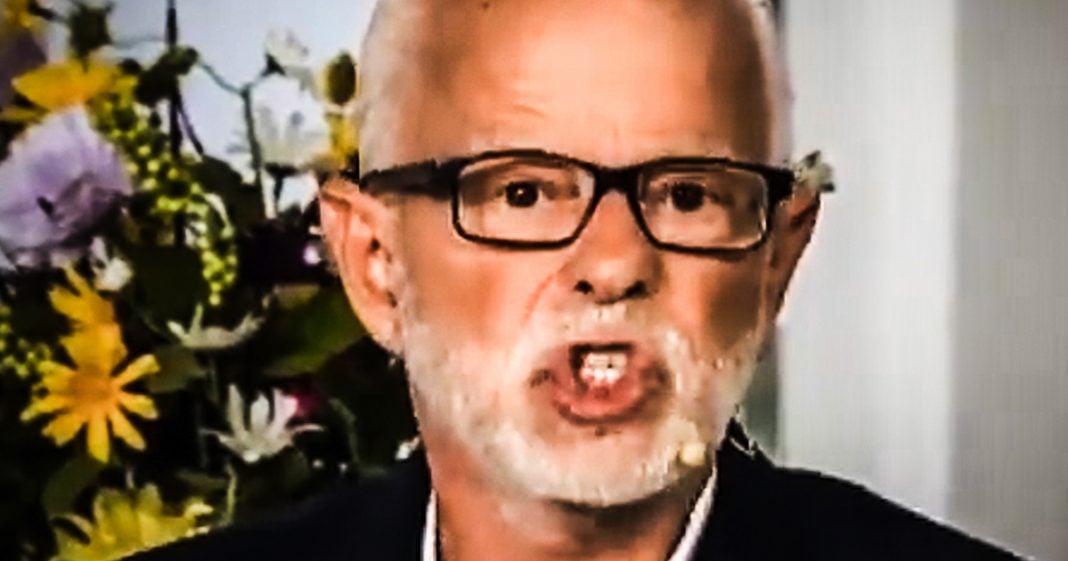 Televangelist Jim Bakker issued a stern warning to his audience recently by telling them that there will be mass death if Donald Trump is not reelected in 2020. Baker was quiet on who would be doing the killing, but he made it sound like God is going to start striking down conservative leaders and politicians out of anger if a liberal ascends to the White House. Ring of Fire’s Farron Cousins discusses this.

Farron Cousins:             Trump’s reelection campaign might be raising a ton of money right now. I mean, tens of millions of dollars. They have got the cash, but unfortunately for Donald Trump, they don’t have the poll numbers. In fact, they’ve got some of the worst poll numbers we have seen for a sitting president heading into a reelection. But don’t worry because Donald Trump also has the support of evangelical frauds, and those frauds are going to do everything they can to scare their flock into voting for Donald Trump in 2020 we saw recently televangelist, well, excuse me, disgraced televangelists. Jim Bakker warn us that if Trump is not reelected, we’re all going to die. Here it is.

Farron Cousins:             So I’m not exactly sure who is going to do all this killing the Jim Bakker is talking about, I mean, he didn’t really say if it was going to, is it going to be the left? Is it going to be God who is killing all of these people? He makes it kind of sound like God is just going to start striking down conservative leaders, evangelical leaders, Republican politicians, all of you for letting Trump lose. Uh, just zap, Zap, Zap, Zap, Zap. You’re in an airplane, Zap. I got you. You’re driving down your car. Boom, you’re gone. Um, and there’s a reason he does this and it’s not just because he’s a little bit crazy. A time in prison. Yeah. Does that to some folk, but he’s doing it because he is scared. He is scared that his buddy Donald Trump, this man that he has thrown his support behind this charlatan fraud, that he is thrown his fraud support behind.

Farron Cousins:             He sees the numbers, he news, he knows how bad things are. So the only way he can get people to support him, the people who tune in to his ridiculous TV show is by trying to scare the hell out of him. You know, telling them, if you don’t vote for this guy, you’re going to die. Or worse. If you don’t vote for this guy, I’m going to die. You’re all want my blood on your hands. So go vote for Donald Trump. You don’t want God to strike down Mitch McConnell, so go vote for Donald Trump. You don’t want something to happen to Marco Rubio and Ted Cruz and Matt Gaetz and you know Ann Coulter and Ted Nugent, right? Well, if you want to protect them, you better go vote for Donald Trump. This is insanity. And I wish I had another word to use that might sound maybe, I don’t know, a little bit more all-encompassing, but really insanity fits the bill here. Jim Bakker, the man who was convicted of wire fraud and conspiracy and mail fraud, and was also accused of using church funds to pay off a victim whom he allegedly raped, thinks that conservatives are going to drop dead either at the hands of liberals or the hands of gods, or maybe they’re going to team up and do it all together if Donald Trump is not elected, and if that’s not insanity, then I guess I don’t know what is.