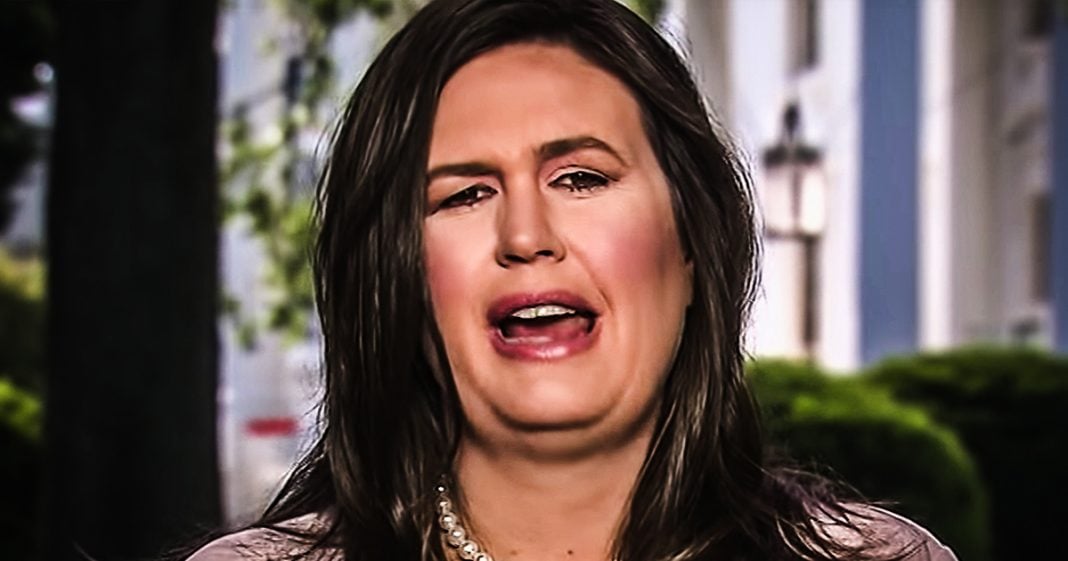 In a tweet on Thursday, former White House Press Secretary Sarah Huckabee Sanders said that Democrats need to quit lying and just do their jobs. She was completely immune to the irony that she lied to the public every chance she got instead of doing her actual job, something that this entire administration has been doing since day 1. Ring of Fire’s Farron Cousins discusses this.

Well, Republicans are continuing their victory lap a after Robert Mueller’s testimony on Wednesday, but it’s a victory lap. That’s really not a deserved as most of us who actually watched the hearing understand. But nonetheless, yesterday, Sarah Huckabee Sanders, the former White House press secretary, came out on Twitter and made a rather tone deaf claim. Here it is.

“Almost feel sorry for the Democrats: they said @realDonaldTrump would lose-he won; said he’d ruin our economy-it’s booming; and when all else failed said he’s a traitor! when in fact he’s a patriot making America great again. Maybe Dems should just quit lying and do their jobs.”

Quit lying and do your job. Now, I imagine the reason Huckabee Sanders had this phrase on her mind is probably because she’s heard it for the last, what, two years. Basically, as people told her, could you please stop lying and just do your job again? This is an incredibly tone deaf statement coming from a woman who was literally paid to go out there and lie on behalf of Donald Trump every day. She was unable to actually do her job because of the number of lies that she told. That’s why she stopped doing it. And I don’t mean resigning. I’m talking about the fact that we went months without any kind of daily press briefing because Huckabee Sanders just, I guess ran out of lies. But here’s the thing, even if we’re not talking about Sarah Huckabee Sanders repeatedly lying to the American people. How about your former boss there, Sarah? Well, over 10,000 lies to his name before you even resigned.

There is a man that needs to stop lying and do his job, but unfortunately doing his job is actually harming the United States. So I guess the lies are better than the harm, right? You’re entire administration while you were there, did nothing but lie to the American public. You, Donald, Kellyanne Conway, Mnuchin, William Barr, and Jeff Sessions before him, that’s all you people did was lie to the American public. The Democrats are not lying about what Robert Mueller actually said during his Wednesday hearing. You are. Trump is. Conway is. Fox News is. He said that he was not exonerated, but you’re still all out there right now saying no collusion, no obstruction. Total witch hunt. I win. You lose, and unfortunately the media is right there with you to help amplify that completely false message. Sarah, I was hoping that once you resigned, we wouldn’t ever have to talk about you again, but as long as you continue to go out there and say completely stupid and a false things, we’re going to call you won it as if you were still a member of this administration.