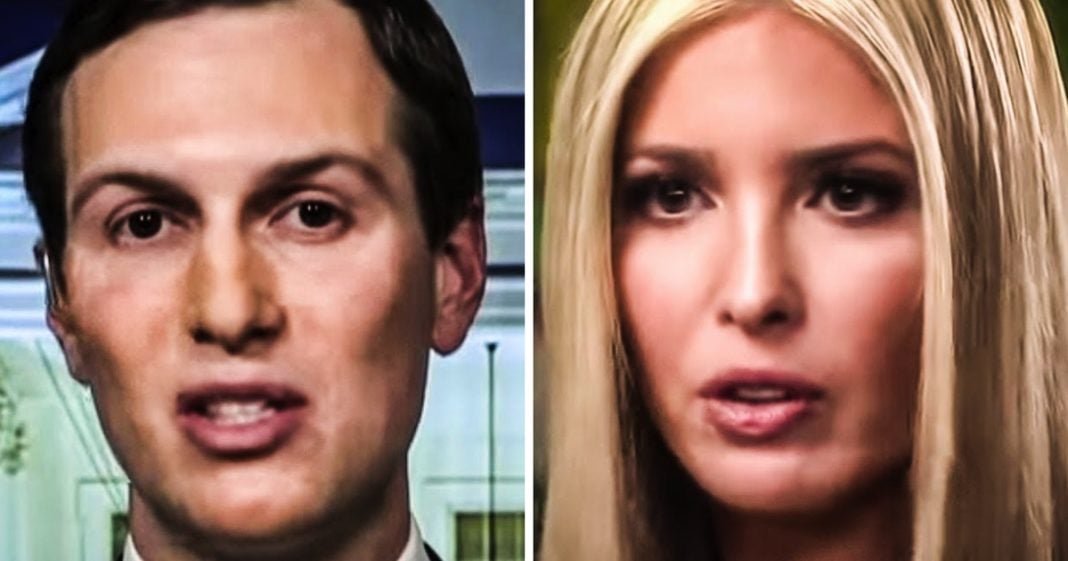 The House Oversight Committee has voted in favor of subpoenaing the private emails and messages of Ivanka Trump and Jared Kushner, as both have been found to have been using private email and messaging accounts for official White House business. Kushner’s messages could prove to be the most damning of all, as he was messaging foreign leaders on the popular WhatsApp messaging service. Ring of Fire’s Farron Cousins explains what’s happening.

You know, the Trump administration really is the gift that just keeps on giving. You know, when Democrats allowed Republicans to kind of capture the narrative following the Mueller hearing and they’re out there amplifying their lies, Trump’s actually claiming that Mueller didn’t say things that he actually said, but Republicans think they won. But Democrats with all their faults, they still always have something else to move on to because this administration is just so dang corrupt. And on Thursday, the House Oversight Committee actually approved subpoenas for Jared Kushner and Ivanka Trump’s private email and messaging documents. The issue here is that both Kushner and Ivanka have been accused of using private emails, private text messages, and private messaging apps for official White House business. And as any Republican in this country will tell you if you use private emails or any kind of private messaging, uh, they want you locked up that, that’s the chant, lock her up.

And that’s what it’s about. The emails and now they’re pissed off because we’re applying the same, uh, level of justice that they would like to Jared Kushner and Ivanka Trump, I mean, help. Hillary Clinton was investigated for this. There was an investigation and I’m no big fan of Hillary. Everybody who watches this understands that, but whether you love her or hate her, you have to admit that her 11 hour testimony in front of Congress, she handled that like a champ. That was remarkable. And all democrats are saying, hey, how about we have Jared and Ivanka come in and do the same thing? They’ve been accused of the same thing Hillary was accused of. Fair is fair, right? Well, no, because all the Republicans on the House Oversight Committee voted against the subpoenas. Luckily they’re out numbered. And then afterwards, Jim Jordan, who has got a lot of problems of his own that are developing right now with the Ohio State, but a Jim Jordan came out and said, oh, this is just a political thing.

They’re mad that they lost the Mueller hearing. So they’re moving onto something else. Yeah, they are moving on to something else. They’re moving on to the fact that Jared Kushner has been accused of using the WhatsApp to send private messages about official businesses to foreign leaders all over the world. I’d say that warrants and investigation. I would say that warrants a subpoena. What is this little weasel talking about to foreign leaders that he doesn’t want other people to see? Now, to be perfectly honest with you, in the case of Ivanka has use of private emails, I would be surprised if it was actually malicious. I mean, Ivanka is a detestable person, but I don’t think she’s smart enough to really use her private email for malicious purposes. Jared Kushner, as I previously mentioned, is a weasel. Jared Kushner is looking out for Jared Kushner. Jared Kushner wants to make a lot of money. He understands when things are illegal because his daddy did spend time in prison for illegal things, and so he wants to avoid the same kind of culpability that his father had, and that’s why he’s using these apps to talk to foreign leaders, and I’m willing to bet it’s not actually about official business. It’s about private business that Kushner wants to do with them when he leaves the White House. And if these subpoenas are successful and they get their hands on those documents, Kushner may be leaving the White House a lot earlier than he expected to.