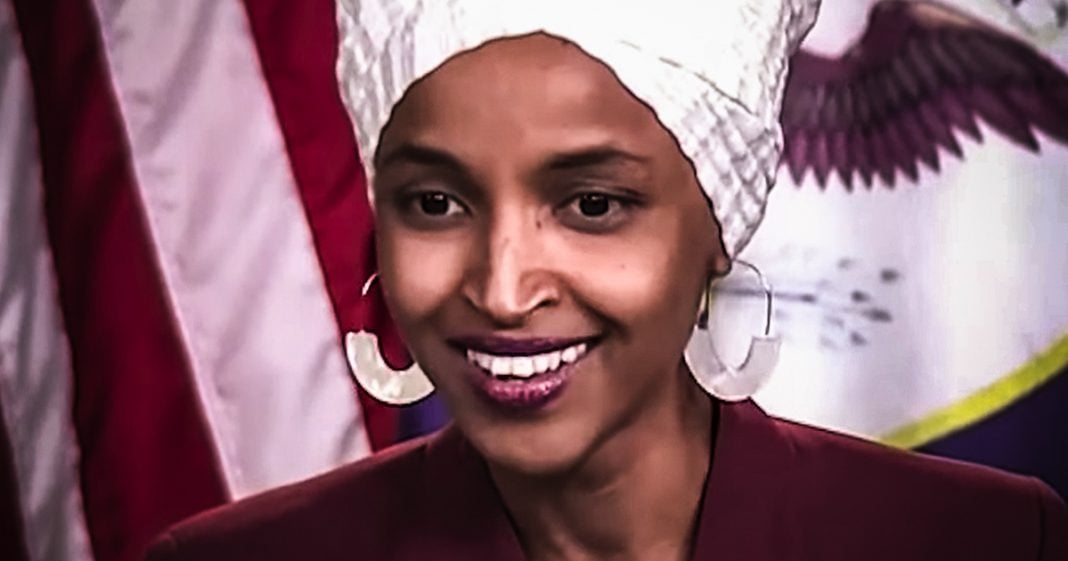 Danielle Stella, the Republican who believes she can unseat Ilhan Omar in 2020, was arrested a few months ago for felony larceny after she stole more than $2,300 worth of goods from a Target store. She later failed to show up for court, causing a warrant to be issued for her arrest, and was then later caught stealing more than $40 worth of cat supplies from a grocery store. She has clearly exhibited a pattern of behavior that will likely land her in jail, as Ring of Fire’s Farron Cousins explains.

Yesterday, news broke that Danielle Stella, the pro-Trump, “QAnon” Republican who is trying to unseat democratic representative Ilhan Omar in Minnesota in 2020, that she had been arrested multiple times, one of those being for felony larceny. Basically she went into a Target store there in Minnesota, stole more than $2,300 worth of goods, totaling 279 different items and only scanned about $50 worth of them. And then walked out, I mean 279 items in this woman’s cart at a Target, I guess I’m assuming she goes to the self-checkout scans a few of them. So it looks like she’s checking out, pays for those couple of items totaling about $50. Then walks out with more than 2000, $300 worth of items, which because it was more than $2,300, that becomes a felony instead of a misdemeanor. And then, so obviously she had to go to court for that, but she just decided, you know what, I’m not going to show up to court.

So she was found to be in contempt of court. A warrant was issued for her arrest, but it’s a small warrant. So the cops did not pursue it, per se, until, that was on April 4th. And then on April 28th, Danielle Stella walks into a grocery store and again, steals allegedly more than $40 worth of stuff for her cat, including tick spray and a bunch of cat food. And at that point, when she was arrested for that, they realized she had the outstanding warrant for contempt of court for not showing up for her felony larceny charges. And things just got so much worse for Danielle Stella. What’s interesting is that it was after these arrests. Oh, and by the way, a few years ago, she was also arrested for driving under the influence, but she pleaded that down to a misdemeanor. So this woman clearly as a pattern of behavior, right?

But anyway, all of these arrests actually happened before her campaign took off. So she had already been arrested, already been stealing, already had the driving under the influence arrest and then decided, you know what, in spite of all this things that have happened to me, some within just the last couple months, I’m going to run for Congress and I’m going to get amplified by right wing media because they’ve absolutely done that. She has helped push QAnon conspiracy theories such as Donald Trump is fighting a global cabal of pedophiles. It’s something that, that she, she believes she also happens to be a special education teacher. And she claims that about 10 years ago, she was the victim of a violent assault. And the reason I bring up the assault is because she claims that she has PTSD from that. So she’s not comfortable being out in public around other people.

And so usually she said she goes to Target or go shopping with another person that can help her. But that’s why she forgot to pay for all of these items. Not because she’s a thief or because she’s a Kleptomaniac, but because she has PTSD and she just, it doesn’t like other people. Right. PTSD is very real. You know, social anxiety is very real. Uh, it was this attack, very real. We don’t know yet. I’m waiting for the evidence to come out that can corroborate her story here. So we can’t say if that’s real or faked, but what we can say is that this woman has exhibited a pattern of behavior and she is going to face a judge, possibly even a jury for her behavior. And that is exactly what the prosecutors are going to establish here. She is looking at up to five years in prison for this felony larceny charge.

And yet Fox News, she’s been on Fox News on Fox Nation. Uh, she, she’s amplified by right wing media. She’s out there pushing these QAnon conspiracy theory. She is a hardcore Donald Trump supporter and she thinks that all of this together is going to help her unseat. Ilhan Omar, who has actually seen her approval in her home state of Minnesota, Minnesota, improve since Donald Trump’s attacks on her. Yeah. This story isn’t going to end well for Danielle Stella, and it’s probably going to end long before her campaign even really gets off the ground because I would imagine it’s probably hard to run a congressional campaign from behind bars.