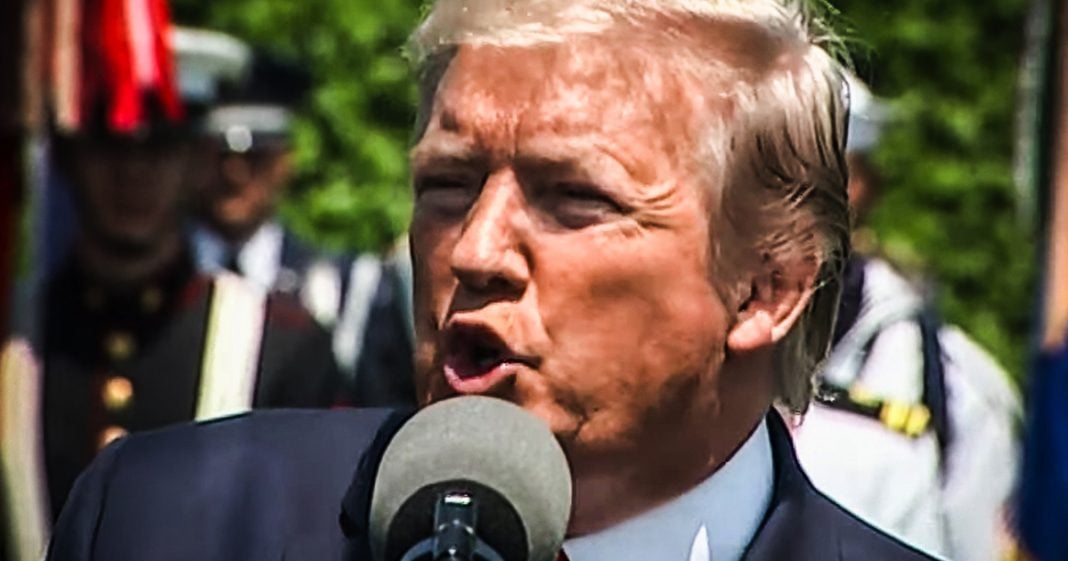 Fox News released a massive volume of polling data earlier this week, but buried deep in the poll were numbers that should be cause for alarm for most Republicans. Those poll numbers showed that a majority of people aren’t happy with Trump’s tweets about “The Squad” and they don’t think he cares about people of color. But did Fox News cover this part of the poll on the air? They did not, and Ring of Fire’s Farron Cousins explains why.

Earlier this week, Fox News released a huge volume of polling data, covered everything. It covered Donald Trump’s approval, his handling of the economy. It talked about all of the different democratic, uh, presidential candidates who to the Fox viewer support it, had it all. It also buried deep down in there, had a couple of questions you know, about Donald Trump’s horrible tweets about the squad and his claims to, if you don’t like America, go back to where you came from. And according to the poll, majority of people stink that that crossed the line that this is a basically a new low for the president. And the majority also thought, yeah, this is pretty racist.

Little further down on the poll, they decided to ask, hey, you know, after, uh, the whole Charlottesville thing in 2017, uh, do you trust Donald Trump? Do you think he respects racial minorities? And once again, a majority of respondents in this Fox News poll said, no, no, he does not respect racial minorities. He does not. He prefers white people. Majority said that the only exception obviously being Trump supporters and in general white men, white men were perfectly fine with Trump’s. Go back to where you came from. Comments, they were totally fine with his handling of Charlottesville. Pretty much everybody else was like, no, no, this is totally 100% racist.

But here’s the thing, as I mentioned, this data is buried deep in this volume, this report, but none of these were ever mentioned on Fox News. They love talking about all the other great numbers. They’re like, oh the economy’s doing great. People say Trump’s handling and the economy is good. His approval rating is up to a staggering 45% wow, that’s super popular. A few more ticks up and may be almost half the country. You’ll support him. Right. But they didn’t mention these polls, these polls, that spelled disaster for the president. Cause you know it’s one thing to go out there and say, Hey, do you support the way Trump’s doing the economy? And people like, well I’m not doing worse. I guess so sure. Whatever. I know other people are probably doing pretty bad, but you know, you get a good sample that doesn’t include, you know, farmers or manufacturing workers, then most people are going to say, yeah, it’s decent.

So that’s a skewed poll already. But nonetheless, uh, yeah, they’re going to say it’s okay. And Fox News loves to talk about that. Like people love Trump’s handling of the economy. Hey, what about the numbers that show that most people also think he’s a massive racist? You want to talk about those? You want to cover that at all? Fox and friends? No, nobody did and nobody does. And that’s what Fox News does. Anytime they come up with a poll, that bad news for Donald Trump, they’re not going to talk about it. I mean it’s there. In their research, they paid somebody to compile this. Why not talk about it? You’re wasting money if you just let it hide in the report and die. Why don’t you make Tucker Carlson address it? He and Sean Hannity can have a lovely discussion about the fact that most people think the president is acting like a racist, but they won’t do it because then that would be admitting the reality that Donald Trump is in fact very clearly racist.