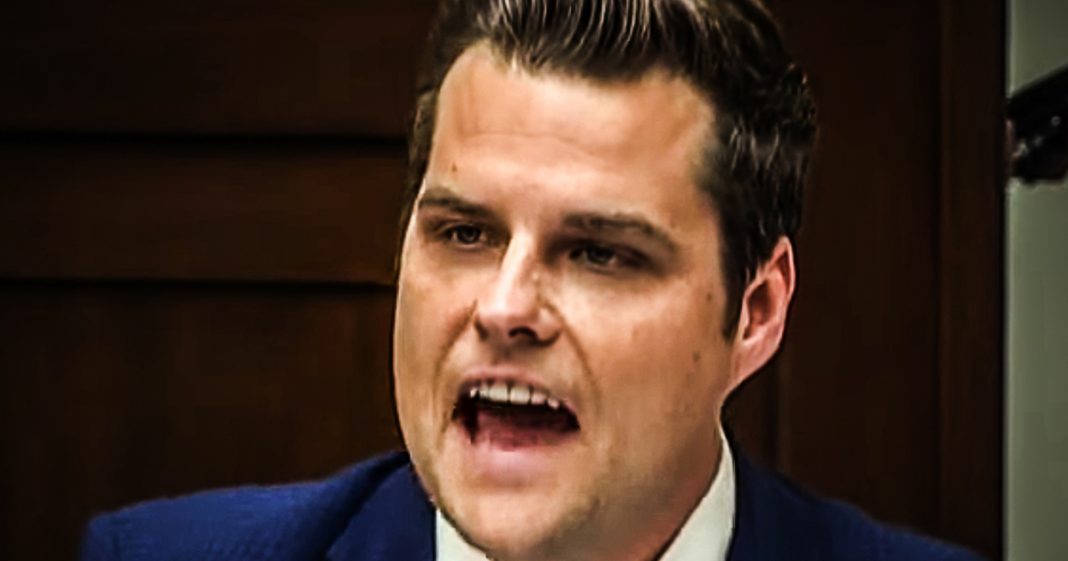 According to author Tim Alberta’s new book “American Carnage,” former Republican House Speaker said that Rep. Matt Gaetz was not a legislator, but an entertainer. This comment from Ryan came about after Matt Gaetz grew furious with White House staffers for not understanding how “important” he was to the President. Ring of Fire’s Farron Cousins discusses this.

Republican Congressman Matt Gaetz thinks he is super important. And that’s not just me talking, that’s not just based on all the evidence we’ve seen of this man desperately auditioning to be on Fox News. It’s actually a what people like. Paul Ryan also thought of Republican Matt Gaetz Serving Florida’s first district right here. Um, according to the new book, American Carnage by a political magazine reporter, Tim Alberta. Matt Gaetz wants, became furious with White House staffers because they allegedly didn’t understand how important Matt Gaetz was to Donald Trump and they didn’t understand his quote, “special relationship” with the president. Now, Matt, I am no big fan of you, and I don’t want to give you any advice whatsoever that might help you in life, but I am going to offer this whenever you’re talking about Donald Trump, a man who, well, has been accused by at least what 19 women now of inappropriate conduct. I would never refer to anything you have with him as some kind of quote, “special relationship.”

All right? That’s just the kind of thing people could obviously take the wrong way. So for me to you, that’s a little piece of advice. I would stay away from that phrase, but I am going to read you an excerpt from Tim, Alberta’s book where he talks about this incident with Matt Gaetz.

“By the summer of 2018, Gaetz was on the president’s speed-dialing list, talking with him regularly by phone and receiving constant feedback after his Fox News hits. This was not enough. The Florida congressman grew upset during one meeting with staff from the White House’s Office for Legislative Affairs, dressing them down for not recognizing his ‘special relationship’ with Trump. Gaetz argued that he should be getting more one-on-one time with the president. Not long after, he was aboard Air Force One for Trump’s latest trip to Florida.”

So Matt Gaetz was super mad. You know, he’s got this special relationship that he needs some more private time with Donald Trump according to this little excerpt. And again, Matt, choose your words a little bit better there. But nonetheless, Matt Gaetz wanted access and at the time that this happened, by the way, this guy was a freshman member of the House of Representatives, had not even served two, four years on the federal level, he was a nobody. He was a nothing and he still is. By the way, in case you’re watching this, Matt, but again, I’m not the only one who felt this way. Paul Ryan, who at the time was speaker of the house, had the following to say of Matt Gaetz following his little White House outburst.

“Matt Gaetz is not a legislator. He’s an entertainer.”

And for the first time in my life I find myself agreeing with Paul Ryan because this is exactly what I have been saying for two years now. Matt doesn’t care about legislation. He doesn’t care about any of us here in Florida’s first district. That’s for Dang sure. What he cares about is being famous. Now, if he has to be a congressman to be famous, that’s what he’ll do. If he has to go to Fox News and constantly do media hits to be famous, then that’s what he’s going to do. But I recognize when people crave the spotlight and that is exactly what Matt Gaetz is all about. I promise you Matt Gaetz would be more than happy to accept a prime time hosting gig on Fox News. If it meant giving up his role as a congressman, he would 100% do it because it’s not about the position he holds.

It’s about the power that comes along with that position, the popularity, the eyeballs, the admiration and adoration. That’s what Matt Gaetz has always craved. Probably because he didn’t get it from his mommy and Daddy. They were too pissed off about having to constantly bail him out of trouble like they did with his DUIs. So he seeks that attention and that acceptance from the public in any way he can get it. That’s why he was doing all these TV hits. That’s why he tries to, you know, be humorous and a Trump, a boot licker on Twitter and it’s not going to stop ever because he’s never going to get that admiration that he so desperately craves.