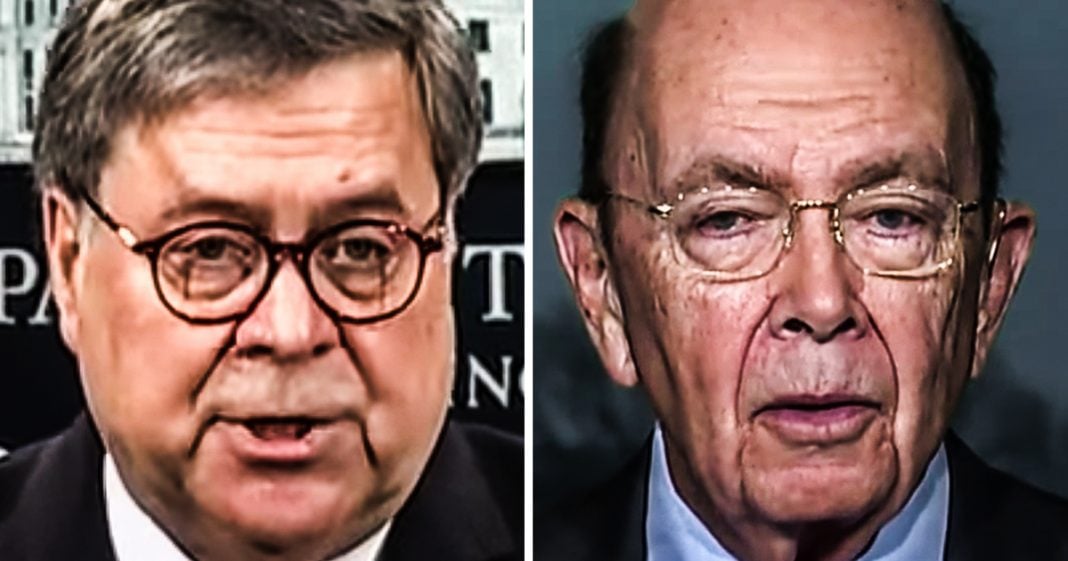 The Department Of Justice has announced that they will not be prosecuting Attorney General William Barr or Commerce Secretary Wilbur Ross, even though the House voted to hold both men in contempt of Congress. The DOJ has the responsibility to prosecute these crimes, though their actions here were completely predictable. Ring of Fire’s Farron Cousins explains what’s happening and what Democrats can do next.

Did you know that if you worked for the Trump administration, you are effectively above the law, or at least that’s what the DOJ told us yesterday when they announced that they would not be prosecuting Attorney General, William Barr, and Commerce Secretary, Wilbur Ross, for the criminal contempt charges that Congress has filed against these two men. Now, before I go into the details, this was 100% expected. Nobody actually thought the DOJ was going to prosecute William Barr or Wilbur Ross, but it does send a very clear message. It sends the message that we’re above the law, that even though our two men broke the law, we’re not going to enforce any penalty. They are free to do whatever the hell they want, even if it violates the law because we’ve got their back. That is the message that was sin. Now, in all fairness, apparently this same thing happened with the Obama’s attorney general Eric Holder many years ago.

The House voted to hold him and criminal contempt because he did not show up. The DOJ then said, we’re not going to prosecute now over the years, and it actually, uh, angered a lot of our audience. We went after Eric Holder on countless different occasions. Guy was absolute garbage and this move of his to not show up when he was subpoenaed is also absolute garbage. He should have been held accountable for it. I’m not going to hold him to a different standard than I am William Barr, Wilbur Ross. They should all be held accountable for these actions. Do you know what happens if you or me get a subpoena? We just say, screw it. I’m not going to show up. Yeah. Within a matter of minutes, maybe hours, depending on the workload. We’re going to get a knock on our door and it’s going to be a police officer coming to take us away. That’s what happens in the real world. Same thing.

If we don’t show up, if we got a subpoena from Congress, police officers are going to come knocking pretty darn quick and they have every right to do that because subpoenas are legally enforceable. Well, this DOJ says, nope, we don’t care. We’re not going to do anything about it. Obama’s DOJ said, we don’t care. We’re not going to do anything about it, and this lawlessness is absolutely disgusting. It doesn’t matter which party it’s coming from. We cannot stand for this. Now there is a remedy. The constitution does lay out an impeachment process, not just for the president or the vice president, but also all the underlings. Right, and that includes William Barr and includes Wilbur Ross, and the impeachment process is exactly the same with the exception of the fact that if it’s not the president being impeached, then the vice president definitely presides over the Senate trial. So Democrats can 100% move forward and impeach both William Barr and Wilbur Ross. We know they won’t, but that option is on the table. However, the Senate is obviously not going to vote to remove these guys because the Senate is the one who voted to put these guys in power. They’re not going to get rid of them. They love them.

They’ve given them everything they’ve wanted, but the Democrats can absolutely in the House of Representatives hang that scarlet letter of impeachment around the necks of both William Barr and Wilbur Ross, and send a message to future generations of leaders in the administrations that lawlessness will not be tolerated sometimes, and the Democrats really need to understand this. It’s not about the end result. It’s about the message that you’re sending. And right now this country desperately needs to see that message from you.