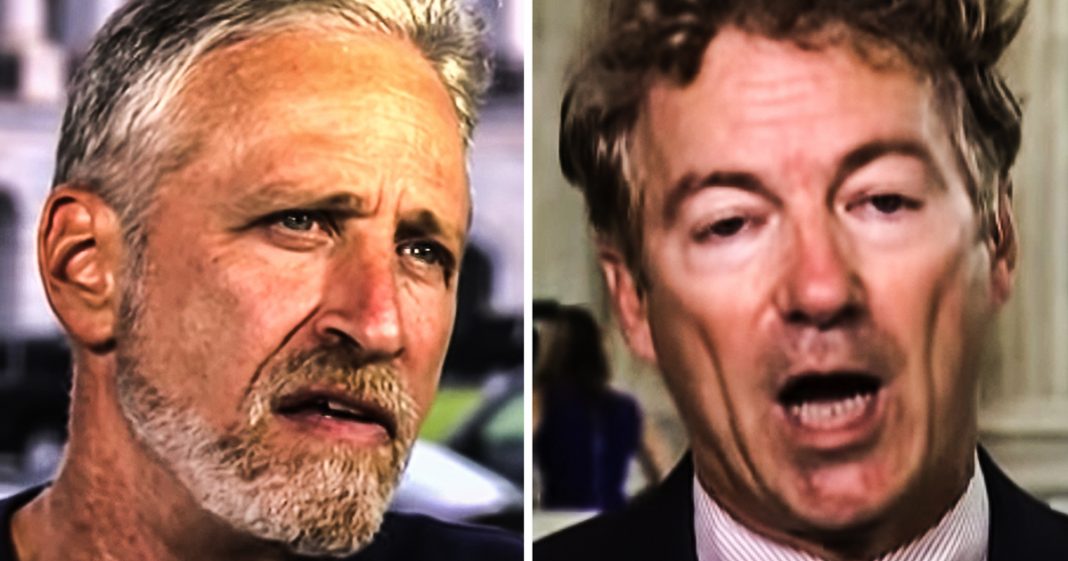 Jon Stewart is not done with Rand Paul, even though the September 11 victims compensation fund has now been approved. Paul voted against the measure, and Stewart called him out once again during interviews. But Stewart says that he isn’t done, and he’s going to keep hammering on Rand Paul as long as he can. Ring of Fire’s Farron Cousins explains what’s happening.

Well now that the Senate has finally voted to reauthorize, the September 11 Victim Compensation Fund, Jon Stewart, the man who really brought this to the public’s attention with his passionate testimony in the Senate, bringing in and working with the victims who depended on that compensation fund. Uh, he said in an interview with CNN earlier this week that he’s not done with Rand Paul after all. As we remember, Rand Paul is the guy who initially prevented this, uh, bill from even coming to the floor for a vote in the Senate Rand Paul didn’t want it to happen. Rand Paul thought funding the victims of 9/11 compensation. That was just too much money. We can’t afford that. But tax cuts for the wealthy elite. Oh heck yeah. It’s expensive, but sure we got to do it. Rand Paul tells us and that’s exactly what he voted for. And then obviously Tuesday we had the vote Rand Paul and Mike Lee. Both Republicans voted against funding the September 11 Victim Compensation Fund. And that is when Jon Stewart went on TV afterwards and had the following to say about Rand Paul.

“He called me a guttersnipe. I have a mind to call him a scallawag and a ragamuffin. I’ll escalate this,”

“What he said was ‘This isn’t about blocking the bill. I think it’s a good bill, it’s about fiscal responsibility’… He said he raised the same objection to the tax cut, but he voted for that.”

So what Jon Stewart is out there doing right now is not only making fun of the ridiculous insult that Rand Paul threw at him, but he’s also telling us the rand Paul, like so many other Republicans in the House and Senate is an absolute hypocrite and more importantly a liar. And he’s dangerous. And here’s the thing. You know, Jon Stewart, um, said that he had repeatedly after Rand Paul, you know, blocked their first attempt.

“Jon Stewart never reached out to me or our office… He is a liar and a demagogue who has revealed himself as nothing more than a disheveled charlatan.”

I’m going to throw a name out there for you, alright, Sergio? Jim Kramer. Remember Jim Kramer? You know, Mad Money? The guy that would go crazy on there and he’d break stuff and he had all these loud and crazy sound effects and then he went on the daily show when Jon Stewart was hosting it and Jon Stewart smacked his ass down so hard that everybody forgot Jim Kramer.

He it even existed. Yeah. Yeah. Jon Stewards, really not the kind of person you want to pick a fight with. He is smart. He is articulate and he knows how to insult people and publicly shamed them into again, essentially disappearing. I was actually shocked to find out within the last couple of weeks, Jim Kramer actually still has a TV show. I didn’t know that, but that’s how in consequential and insignificant he became after Jon Stewart basically called him a charlatan. And it’s going to happen to you too, Sergio and you too, Rand Paul, because Jon Stewart’s not going to give up this fight because it’s a good fight. He’s on the right side and you’re not. You guys are hypocrites and he is not. And if you want to engage in a battle of name calling with somebody, Jon Stewart might be the absolute worst person on this planet to pick that fight with because he’s not going to lose. And he has nothing to lose at this point and everything to gain because he’s out there fighting for people. While you Rand Paul and everyone in your office claiming to be fiscal conservative libertarians, you’re only fighting for the interest of billionaires.