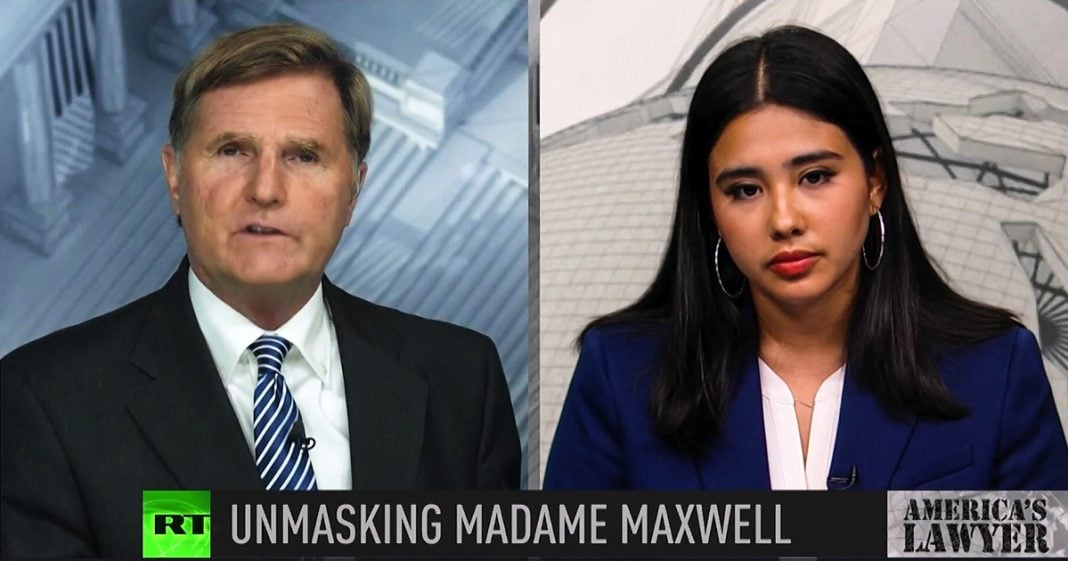 Via America’s Lawyer: Mike Papantonio and RT Correspondent Michele Greenstein investigate British socialite Ghislaine Maxwell’s involvement in Jeffrey Epstein’s sex trafficking ring. Their relationship turned the two from romantic to business partners, as Maxwell was found to be complicit if not ENCOURAGING of Epstein’s slew of sexual assaults and solicitation of child prostitutes.

Mike Papantonio:             There’s been no shortage of media coverage of the Jeffrey Epstein saga, but one person involved has escaped scrutiny. Ghislaine Maxwell, Epstein’s ex-girlfriend, who allegedly worked to recruit young girls for Epstein’s harem. The attorney for one of his accusers actually called her out by name in a statement issued by their client. Let’s take a listen.

Sigrid McCawley:               After years and years of trying my best to shine light in the dark place of sex crimes at Jeffrey Epstein and Ghislaine Maxwell and their circle of powerful people committed against me and girls just like me, finding the words adequate enough now to express how I feel is a tall task. But I can say without hesitation that I am deeply pleased that the federal prosecutors in New York have arrested Jeffrey Epstein, and our case is taken in a serious way. It is time for Jeffrey Epstein and those who participated in these sex crimes to be brought to justice.

Mike Papantonio:             This is a person that really needs to be exposed, and that’s what we’re going to do right now. Joining me to talk about this woman and why it matters is RT correspondent, Michele Greenstein. Michelle, let’s start at the beginning. I mean, this Maxwell woman, Maxwell, she grew up very privileged thanks to her father’s media empire in the UK. Tell us about it. You know, now she, she, the story has been lost because for some reason the media is not turning the attention to this woman like this should be. What’s your take?

Michele Greenstein:              That’s absolutely correct that she had a very privileged lifestyle. She came from this elite British family. Grew up in a 53 room mansion. Her family even had a yacht that was actually named after her by her father. And some of her friends included Prince Andrew who ended up as we know, becoming a frequent guest of Jeffrey Epstein. Now this is all because her father Robert Maxwell is a name among media moguls, like a William Randolph Hearst or maybe Rupert Murdock. He’s just as big as those players.

He owned tabloids, including the Daily Mirror. He had a stake in MTV Europe and he’s one of the most well known personalities in the UK in the fifties and sixties. So this is a man who was a Jewish citizen of Czechoslovakia. He left when the Nazis came, of course, enrolled in the British army and actually connected with British intelligence.

Mike Papantonio:             Let, let, let me, let’s go, let’s go to her. Okay. She comes to the United States. He dies in what looks like a suicide, rolls off a boat. At the time that this suicide or death occurs, what he’s done is he has stolen money from the pension plans of the, of the papers that he works for. So she comes to the United States, she’s lost her fortune. She needs to get it back. She comes as what we call in New York, they love the use of the term social fixer, whatever in the world that means, but she’s a social fixer.

Michele Greenstein:              Sure she came to the 90s after the death of her dad and it’s absolutely right what you’re saying. Her boyfriend, Jeffrey Epstein, basically offered her this rich and grand lifestyle, which of course included things like a private jet or a townhouse in Manhattan, but she also did a have a bit to offer as well, like you’re alluding to. Her social life was almost out of a movie. She was reportedly friendly with Bill Clinton, the British royal family, as I mentioned before. And this is a partnership that although it started as a romance, definitely continued even after the romance ended. So it was a two way street in that he gave her money and she gave him access to these social circle, circles coming from at the very least, a very well connected family, who at the very most was also a quite a controversial figure.

Mike Papantonio:             Okay, so here’s the deal. Let’s get to the heart of it. Three women accused her of basically nothing short of just a, it’s a sexual attack. There, there are different stories by different women. Each time she says, no, that didn’t happen. But each time, at least in two of the cases she settles with them. It’s a sealed settlement. She acts like, well, you know, I just did it because I had to. No, she had to do it because she was caught and these people’s affidavits are startling. As you look at the affidavits, of course, one of the state one, the, one of the affidavits talks about the fact that Maxwell actually trained women how to take care of men.

That, you know, almost, she was a Madame. I mean she told them how to engage in oral sex. How’s, how, how do you go about doing it? How do we take care of tiny little Jeffery? How do we make sure that Jeffrey is, is happy? How do we make sure that all the women, that all the men that Jeffrey brings in are happy? Why don’t you take it from there, with the notion of understanding this very important, both cases, she settled and those, those, those documents have been sealed. They have the chance of being unsealed in the next few weeks. What’s your take?

Michele Greenstein:              That’s right. She’s been accused in these civil suits essentially of luring women into Epstein’s web. So Ghislaine allegedly acted as a recruiter and sometimes even as a participant in this sexual abuse. One of those victims, Virginia Roberts Giuffre, the same alleged victim that you quoted in the beginning here says that much of her grooming actually came from Ghislaine herself. And that included Ghislaine actually instructing her how to essentially give Epstein what he wants from being quiet to subservient, to flat out instructions on how to give him oral sex. She says that a lot of that “training” came from Ghislaine herself.

Now, Maria Farmer is another one, another one of these victims who also alleged that both Epstein and Ghislaine actually sexually assaulted her while she was a graduate student and that they flew her 15 year old sister to his private island in the Virgin Islands, to Epstein, oh excuse me, to Epstein’s ranch in New Mexico and ordered this 15 year old to take off her clothes and also touched her improperly. In fact, another alleged victim in the same case says that while at the Virgin Islands where she was forced to have sexual relations with Epstein, Maxwell appeared to essentially be in charge of what all these girls do. So at the very least, if these allegations are false, Ghislaine is an enabler.

Mike Papantonio:             Well, look, I gotta tell you something. There’s no reason you don’t prosecute this case. I was a prosecutor. I understand what it takes to prosecute a case. There’s all you need on this woman.

Mike Papantonio:             But right now she’s somewhere, nobody will tell you they, you know, her lawyers say that she’s in London, but we don’t know where she is. Some other people say she’s in the islands. Obviously she knows it’s coming. She’s trying to avoid having to come back to the United States because she knows how dangerous it is. Okay, let me, let me run something by you. She, even after these, even after these cases take place, the publicity is all over the place. AP picks it up, Reuters picks it up. Everybody’s writing about this dirt bag, Epstein and his and his Madame Maxwell. Okay, that doesn’t stop anything, does it? She comes to New York and she is the socialite.

Even after all this, she’s hanging around with, you know, the glamorous people. Here, here’s how they describe her. Well, you know, she was, she was, she, she was wickedly funny and glamorous and savoir faire, absolutely famous. All these terms used by these nutcases who know clearly what her history is. Now if you read what they have to say, this is, this is incredible to me. It starts with, I vaguely know her. Maybe I saw her one time at a fundraiser. I never knew about the sex abuse, even though, as I say it was on AP, Reuters, everywhere. And I love this one. I love this one.

It’s, it’s, she’s describing somebody asked one of them, we’ll do, you know her background and the, the, the description is well, we don’t really ask questions like that around people that we hang out with. It just isn’t, it just isn’t proper. So there’s this mass exodus from what I call the social, you know, the social, a list. And, and the problem I have with it, and maybe I want to know your reaction to it. The problem I have with it is these people knew exactly who this woman was, knew exactly what she had done, knew exactly the relationship with Epstein. And nevertheless, it’s this all, let’s all hug. Let’s have a Koombaya moment.

Michele Greenstein:              Right, continue to have relationships with her.

Michele Greenstein:              Sure. I mean, she’s definitely been described as like a socialite, very exuberant. So it makes sense that it was her job to essentially jazz up Epstein’s social life. But of course, no one wants to admit to, you know, being connected to someone who is involved in such a scandal. It absolutely makes sense that everyone’s trying to distance themselves. But like you’re kind of alluding to, she certainly developed her own relationships with these social circles outside of Epstein. It’s even been said that a lot of the reason why people even talked to Epstein was because of her, was because of Ghislaine, that she was the real draw for people.

And after all these scandals started to emerge in the 2000’s, her reputation seemed to survive. All of them, she, you know, founded this nonprofit to save the oceans. She seemed to have survived all of these Epstein scandals. And even the year after, she got her first subpoena in a lawsuit filed by Virginia Giuffre, she was seen at Chelsea Clinton’s wedding. So it seems like they didn’t mind enough to disinvite her from something like that.

Mike Papantonio:             Right. She remains part of the social a list. Even though all these, even at this point, we know that she’s settled the cases. We know exactly what the history is of Jeffrey Epstein. It’s such an odd, it’s such an odd setting up in New York and in LA where they embrace this woman said, yeah, she’s really one of us. Look, thanks for joining me. I want to pick up this story as the, my prediction is she’s going to be charged. She certainly can be charged with conspiracy. That would be my prediction.

Michele Greenstein:             That’s right. I mean, if these allegations are true, she is at the very least a co-abuser and should be charged as such.