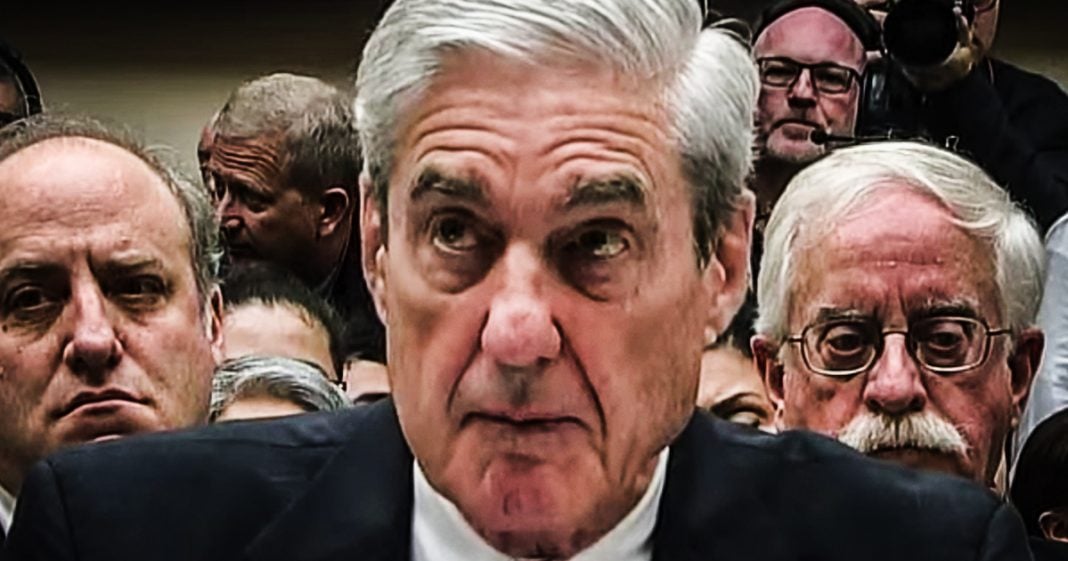 Both Republicans and Democrats are claiming that they won the day with Mueller’s testimony, with both sides claiming that he proved their points. The truth is somewhere in the middle, with Mueller confirming Democrats’ claims about Trump and Republicans attempting to trip him up with conspiracy theories. The question that remains is which side is the public going to take? Ring of Fire’s Farron Cousins discusses this.

All right, so obviously we’ve got to talk about Robert Mueller’s testimony yesterday and before we get into, you know the whole thing of optics and who won and who lost. Let’s strip it down to some bare bones facts here. Robert Mueller did say as the report says that he believes that people associated with Donald Trump, the campaign, the administration, whoever it is, they absolutely in his opinion, deleted messages, deleted communications, deleted electronic communications of all kinds and that hindered their investigation. Now again, that is something we already knew. Mueller was also very clear to say that this report did not exonerate Donald Trump at all. He also told us that Donald Trump could absolutely be prosecuted once he leaves office, assuming that he’s voted out in 2020 then you can prosecute him for the obstruction of justice. No problem. All of those things were things that we knew and that’s the problem with the overall testimony.

Yesterday, Robert Mueller told us back when he gave his little press conference that if I am called to testify, I am only going to talk about things in the report. I am not going to go beyond that. I am not going to speculate. I’m only going to say what’s actually in that report. So there’s really no reason to call me in to testify. Well they did it anyway. They thought it would be good and maybe it was, maybe it wasn’t. We’ll get to that in a moment. But also a lot of people calling Robert Mueller out for not wanting to read from the report, which admitted the is very odd. However, uh, there was an announcement before he ever testified that he refused to read anything from the report. Uh, the law makers were actually told that. So why they continued to ask him to read from it, uh, is confusing cause they knew he wouldn’t do that.

But also his decision to not read from the report is equally as confusing. Uh, there were 206 times during his testimony where he flat out said, you know, either read the report or I’m not going to answer that 206 times where he just straight up said, I’m not going to answer that question. So, not a very productive testimony. But here’s the thing. Now let’s get into the optics of the whole thing. Cause that’s what everybody’s talking about. Um, immediately following the hearing, and in fact, sometimes during the hearing, you had Republicans going out there saying, we won. Robert Mueller proved our point. You had Democrats out there saying, we won. Robert Mueller proved our point. And those are two impossibilities. Both sides obviously cannot win this in the matter of did Donald Trump, uh, probably break the law. Yeah. Mueller was, uh, giving the Democrats of victory there on the point of can we make you look like an incompetent fool republicans that hell yeah, they did.

They did make Robert Mueller look confused sometimes. Sometimes he fired back at them. Sometimes you had phenomenal Democrats asking phenomenal questions. But all of those were rare. Overall, it was a big nothing, I don’t think either side necessarily won this thing. I don’t think anybody necessarily lost. But the media is out there right now, including Chuck Todd Saying, Oh, this was so bad for Democrats. Oh, you had Matt Gaetz and Jim Jordan up there. They were just letting Mueller have it left and right, man. No, they, they also looked like crazy fools pushing conspiracy theories. Same thing with Devin Nunes and then you had the folks who were completely obsessed with Russia, but that’s actually another point all together. It’s not necessarily about the collusion because according to Mueller, obviously things were likely to deleted. We don’t know what we don’t know and so we weren’t able to establish that connection.

But what he did hammer on, and this is the big takeaway, is that our election system is weak. Russia interfered in 2016 maybe not the Russian government, but people from Russia interfered and now, and he made a point to say it’s happening right now. It’s not just Russia. There’s other countries involved in this as well because now they know what to do and how to do it and they know that it’s not that difficult and that’s what we need to focus on. That’s what we need to protect the integrity of our elections. That’s what Mueller wanted to say yesterday. He didn’t want to go into the minutiae of the report. The reports out there, read it if you want to. I think everybody who was watching that to testimony yesterday came away with the take that they wanted to come away with, which is exactly what we said on Tuesday, the day before the testimony.

Everybody’s going to look at that and think that they automatically, one, everybody’s only going to take away the parts that confirm what they already believe. Are you going to change anybody’s minds with it? No. Did anybody’s minds get changed from that yesterday? Maybe Republicans are out there hammering pretty hard that they won that Mueller’s discredited, that the whole investigation was discredited. They’re going to keep pushing that Democrats are not going to push the fact that we’re prosecuting Trump after he leaves office. Especially because if it’s up to those Democrats, Eh, we’ll probably forget about it. You know, let the statute of limitations run out and you know, let’s look forward not backward as Obama said when he took office on his decision to not prosecute Bush and his cronies for war crimes. That’s what Democrats do best. Nothing. And that’s probably what’s going to happen in this case.

And Yeah, today there’s a lot of people out there saying, Pelosi open the impeachment inquiry. I’m one of them. I agree. Open the impeachment inquiry, but focus less on the Mueller report, only focused on the obstruction of justice on it. Focus more on the banking crimes. Focus more on the emoluments clause violations. Get all the evidence you need, and then move forward. The Mueller was never going to save us from Donald Trump. We have said that repeatedly. We set it again on Tuesday, and we’re telling you this for the final time. It was never Mueller’s plan or job to save us from Donald Trump, and it’s time to move on. And impeachment inquiry would give us plenty of good evidence to get this crazy person, probably not out of office, but severely hinder his reelection chances. And that’s what needs to happen. But the focus needs to be more on the things that weren’t in the Mueller report.