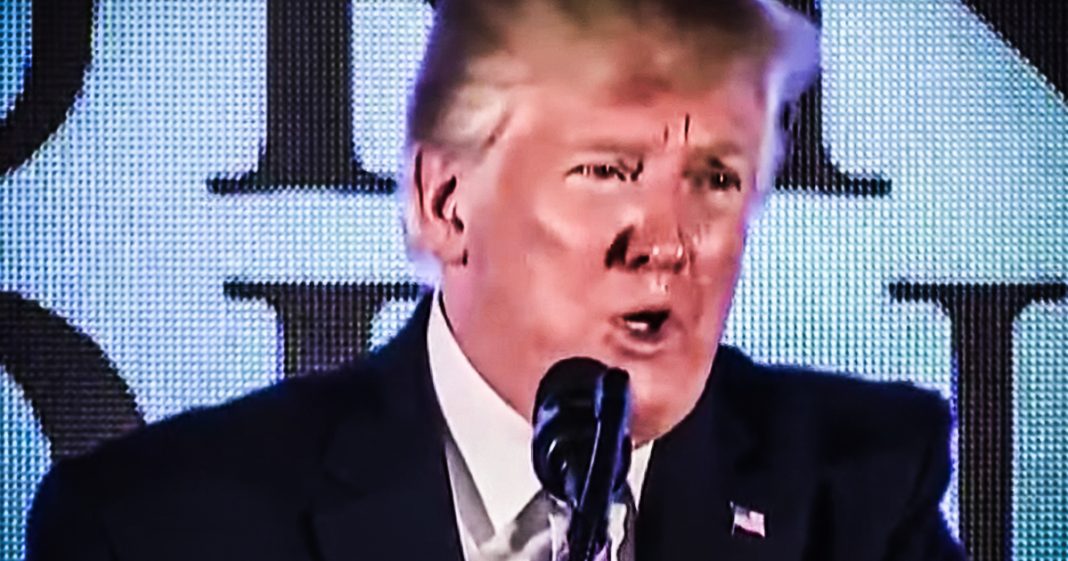 Donald Trump pulled out all the stops during a completely deranged speech to the hate-filled Turning Point USA folks yesterday, making up stories about Alexandria Ocasio-Cortez and Ilhan Omar to wild applause. But Trump’s make believe stories aren’t the most disgusting part of the story – the real problem are the crazies in the audience who eat this stuff up. Ring of Fire’s Farron Cousins discusses this.

Farron Cousins:             Yesterday, Donald Trump delivered a speech in front of a room of turning point USA, a member’s a whatever they call themselves, and I want to show you a clip here. This is a three minute clip, but please watch the whole thing. I want you to really watch this and soak it in. Here it is.

Donald Trump:             …Attack like no one has ever seen before. His people have lost all control and even the Democrats, they left, but now they’re getting dragged into a radical left position. I can’t imagine who’s doing that, but they’re being dragged. They’re being dragged radical left with these people that I believe. Honestly, I believe they hate how our country, okay. I believe they hate our country. And it’s true. When I watched this maniac to leap screaming and shouting, and this was before she was a congress person. Can you believe it? But screaming and shouting at a control, and then you see they have now another clip where she’s even worse. This is representing us. This is not what we want representing us. I don’t think, and I think it’s why we’re going to have a tremendous victory in 2020.

Donald Trump:             And you know when I have one of the others, I guess this is Cortez, and I said, I’m not going through them sir. Her name is Alexandria, and the guy couldn’t figure out her second name. It was so funny. I’m being interviewed by one of her. Her name is Alexandra. Um, wait a minute. Wait a minute. Okay. He never got it out. He never found his notes. I said, that’s okay. I told him just call a Cortez because I don’t have time to call her by the whole name, it’s too long. You know you’re doing an interview. She called our country and our people garbage. She said garbage. That’s worse than deplorable. Remember? Deplorable. Yes. You do. Remember Hilary, the deplorables, she actually said a word that was where she said deplorables at. What was the second one? Go ahead. Irredeemables that’s right. She said irredeemable. She said, she said deplorables and irredeemables. And when she said that, I said, boy, that irredeemables is really a bad, well, that was not the one you never know in politics, right is a tough business. You say a word in your gun, one wrong word. You can make 20 great speeches, brilliant disease, great the greatest order, the greatest storage of our times. He’s the great one word and you gone except for Trump. Because we represent you. Because we represent you.

Farron Cousins:             Now here’s the thing. We can obviously go through and just point out the fact that he is absolutely lying about Hillary Clinton. He’s lying about a Kazuo Cortez. He’s, he’s lying about Omar because he is, but that doesn’t matter. We the normal, rational, free thinking people in this country watching this segment right now, you know that those are lies. That’s not true. He’s saying that they said things that they never actually said.

We could also obviously talk about the fact that I don’t have time to say her full name. It’s cause you have no respect for women like that. That’s what this is about. But she is along with Omar and Presley and slave. They’re living rent free in your head right now. By the way, you will not stop talking about them. You are obsessed with these four women. They scare you, they frighten you and that’s why you try to demean them. But again, we all already know that. So there’s no point in rehashing all of that. We know that Donald Trump is a liar. We know that he’s a little bit crazy. We know that from that clip he was slurring his words a lot, wasn’t he? Go back and rewatch it if you need to. There’s a lot of slurring in there and talking is not quite right bud.

But I don’t even want to talk about Trump right now. What I want to talk about or the people in the crowd, cause as horrible as everything that Donald Trump said in that clip was those people are 10 times worse than him. Every single one of them. And not just the people in that room that people who go to his rallies and cheer, the people who walk around wearing the magna hats. As I mentioned. Not that long ago, I’m not going to be nice anymore and so I’m going to say exactly what I think about these people and to be honest, it’s not even what I think about these people. I’m going to tell you what’s happening. These people are idiots. These are not smart human beings. They’re not intelligent by any stretch of the imagination. They are sheep

and that’s an insult to sheep to be honest with you. But they have fallen into this cult. They have allowed this overly pompous, narcissistic, smug bastard to lead them all to slaughter. And here’s the thing. Yes, I think each and every one of them is absolutely stupid, but so does Donald Trump. That’s why he does this. If you notice in that speech, that three minutes segment we did and you can go and find the whole speech if you want. There is no substance to it at all. It’s just vague, weird talking points lies about other people and then praising himself for things that aren’t actually true. There was no policy discussion, there was no rational conversation to be had. It’s just nonsense, nonsense. And those people in that room at turning point USA who collectively wouldn’t even have an IQ that would hit room temperature, ate it up.

They absolutely loved it. You know, with all of that applause and cheering and the one idiot who started staring, lock her up, you might as well just heard, ah, ah, because that’s what I hear now when I watch these things, these aren’t people. They aren’t people who are capable of rational thought. These aren’t people who want politicians to do some good for this country. There are people who want to follow a cult leader because they do not want to think for themselves. They are sheep, and they’re completely ignoring the fact that Donald Trump is hauling them all off to slaughter. And to be honest, even if they did know it, they probably wouldn’t even care.