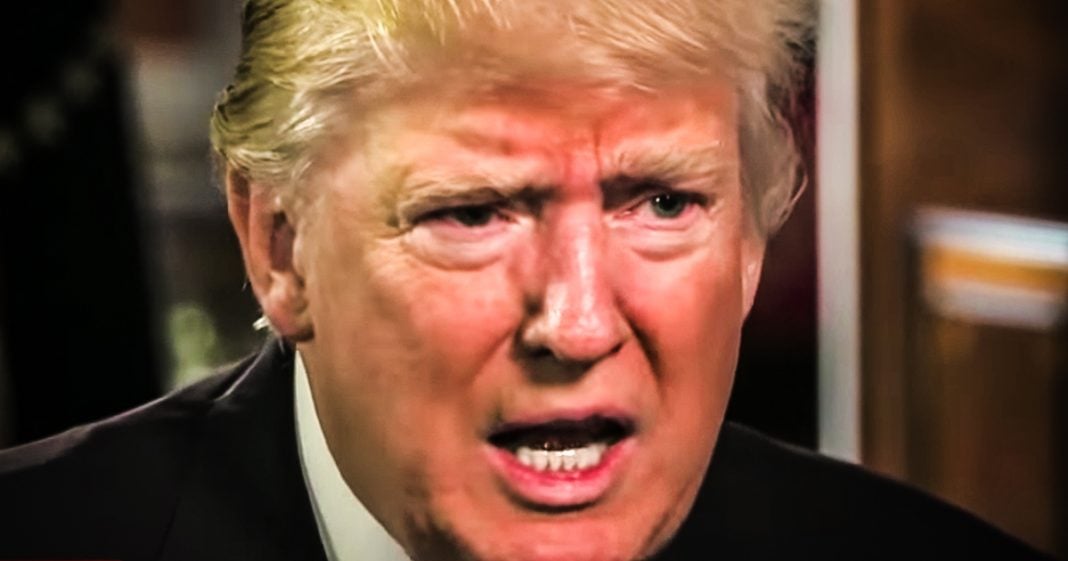 Donald Trump proclaimed himself to be “very innocent” in a tweet on Wednesday morning, which was less than 24 hours after it was announced that he is suing Democrats in Congress and lawmakers in New York to stop the release of his financial information, including his tax returns. The man very obviously has something to hide, otherwise he’d have no qualms about releasing it, as Ring of Fire’s Farron Cousins explains.

In a tweet early Wednesday morning, shortly before Robert Mueller’s testimony, Donald Trump told us that he was in fact very innocent and the reason I want to bring up that tweet of him saying I am very innocent is because just 24 hours before that tweet was ever sent out from the president’s phone, he filed a lawsuit in federal court against Democrats on the house ways and Means Committee against New York law makers and against tax officials in the state of New York to ban them forever from releasing his financial information. You know exactly what a very innocent person would do, right? Hide all of your financial records because you don’t want anyone to see them because you’re so innocent. Maybe the innocence of his financial records would have been too much for those democrats to handle and it would have just blown their minds of all the innocence oozing out of those papers.

I don’t know exactly what it is, but I do know that this guy is 100% definitely not very innocent and that’s why he’s suing to stop the release of his financial information, which includes not just bank records but also his New York state tax returns. Now here’s the thing. The Democrats have not necessarily yet requested those New York state tax returns. They should have. They should have done it that very day. Cuomo sign that new bill saying, if you want somebody who’s tax returns, you can just ask and we’ll hand them over. That’s now a law in the state of New York. But the house ways and means committee was like, well, we don’t know. We kind of want all of them, not just the New York state. So Trump is now filing a lawsuit saying that, nope, Congress only has the authority to request federal tax returns, not state tax returns.

Therefore they cannot get their hands on this information. But if the information is willingly given to them, they are allowed to have it. Trump’s legal argument, like all of his other legal arguments is absolute garbage. New York passed this law, they can give those out. It doesn’t have to even be necessarily a formal request for documents from the House Ways and means committee. But nonetheless, Trump thinks he’s got a case. And of course this is obviously going to hold up any effort the Democrats may have launched to get their hands on those tax returns and the financial records. But here’s the thing again, this is the bottom line. The man has something to hide and the more he fights it, the more he says no, you can never get your hands on these. The more we need to get our hands on those things. An innocent person, somebody with absolutely nothing to hide, would not be behaving in this manner.

Trump would not be suing them to stop them from getting their hands on it, buddy is because there’s something bad in there. And as I’ve said in the past, maybe it’s something innocuous. Maybe it shows that Donald Trump is only a millionaire instead of a billionaire. Maybe it shows hardcore financial crimes. But even with the millionaire billionaire thing, that is a massive blow to Trump’s ego. And that’s what he cares most about other than the money itself. And if he suffers that blow, he feels he’s not going to be able to come back from that in the 2020 election. Everybody’s going to know he’s a fraud. Everybody’s going to know he’s not super rich, he’s just mega rich. And that is bad enough for Donald Trump to want to sue. So again, it could be something like that. It could show bank fraud and wire fraud, which you know, Michael Cohen implicated him in during his congressional testimony. But that’s another reason why we need these things. Trump has been implicated in these crimes and we need to get our hands on that information to find out if we need to go forward with a prosecution for these crimes or to find out if Michael Cohen was absolutely full of it. We won’t know until we get our hands on those documents. So Democrats, lawyer up and get ready and fight this tooth and nail because if there wasn’t something juicy in there, he wouldn’t keep hiding them.