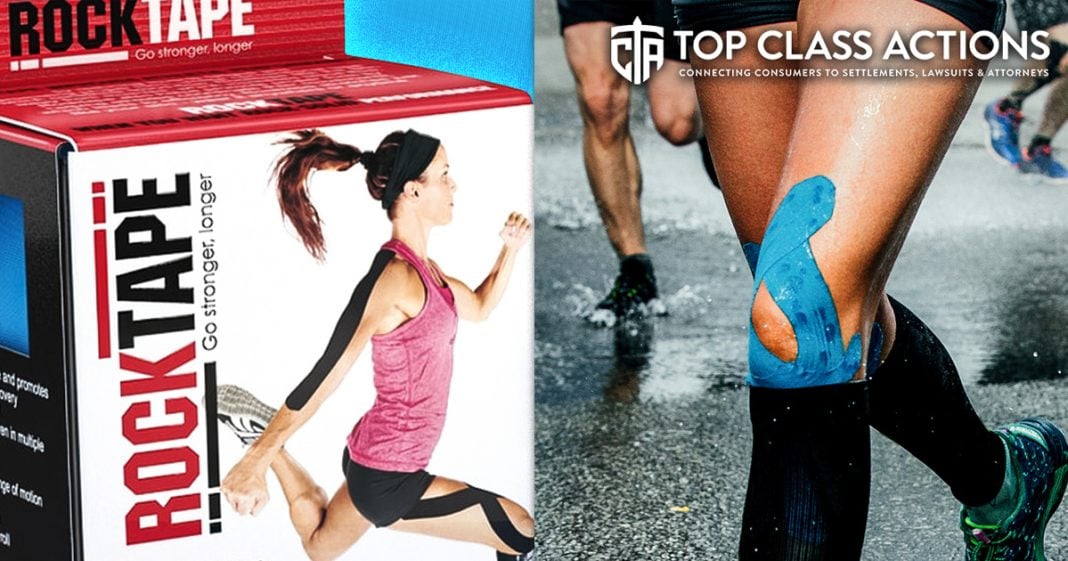 A RockTape class action claims that the kinesiology tape does not provide the pain relief that is advertised by the manufacturer. Kinesiology tape is unique from other types of athletic tape which are wrapped around the body because it is pre-stretched and then stuck over the affected area. The idea of kinesiology tape reportedly originated from a Japanese chiropractor in the 1970s. Although the practice has gained popularity, a recent kinesiology tape class action claims that the idea is “lacking in substance or merit.” According to the RockTape kinesiology tape class action, “the scientific community that has studied kinesio tape has come to the conclusion that it does not treat injuries, improve or enhance athletic performance, reduce or delay fatigue, or provide relief from pain, nor does it do so any better than conventional sports tape.” Ring of Fire’s Farron Cousins discusses this with Scott Hardy, President of Top Class Actions.

Farron Cousins:                  For anyone who’s ever had to deal with chronic pain or an injury from a sports related accident, injury from doing yard work or playing with your kids or an automobile accident. There’s really nothing that you wouldn’t do to feel better after a serious accident. And a lot of companies understand this and that’s why if you go through the pain relief aisle, you’ll see all kinds of tapes and braces and other joint compounds saying we’re going to make you feel better than any of the competitor’s products. The question is, can they back up those claims?

And according to a new class action lawsuit, some of these products definitely cannot back up those claims. Joining me now to talk about this is Scott Hardy with Top Class Actions. Scott, this is a really interesting one because this is a market that is really taking off. You know, the, the braces and the tapes and the wraps for people with any kind of muscle or joint injury. And the specific class actually we’re talking about right now is RockTape. Tell us what’s happening with this one.

Scott Hardy:                          Sure. So we’ve seen other class actions in the past over these kinesiology’s tapes. And so now we have RockTape, sorry, RockTape that’s listed in this and the RockTape kinesiology tape that is sold as something that can help stop you from getting injured. And if you have an injury, can help control it, help reduce your pain. It’s just overall, it’s one of those kind of magical elixirs that you will tape on your, your, your effected area. And as you said, these pre-cut pieces of tape that will help control things so your muscles don’t move out of balance that your bones and your joints aren’t moving wishy washy causing all sorts of pain.

So people think naturally, oh, let’s go ahead and use that. They’re using it. It’s good for me. Not really knowing that they’re probably getting paid to use it or the league is getting paid to use it. And so the class action states that RockTape in and of itself with the RockTape kinesiology tape doesn’t actually do anything. And the plaintiff here who filed this case said he was injured, he had some problems. He bought the RockTape thinking that it might actually help him out, put it on, used it as directed, but did not actually have any benefit.

It felt just the, he felt all the same pain, had all the same problems that he had without it. So essentially the class action is just stating this is a sham. Kinesiology tape and RockTape specifically isn’t going to do anything for you. Don’t waste your money. If you need to wrap your leg, wrap your leg, but you don’t need to spend extra cash trying to get some special fancy tape.

It’s regular standard, you know, wrapping and they do that and it does help her, but they’re also trained professionals. They know what to do. You walk into a store and they say, okay, here’s the thing, you wrap it around, you tape it in these parts, you’re good to go. I think that’s also a big part of the difference. Now that is not the fault of the consumers at all.

That’s the businesses trying to cash in a little bit more saying, well, we’re not going to get as many people buying this if we’re only selling it, you know, to the physical therapists or if it’s only available in somebodies doctor’s office, that’s not good enough. We’ve got to go out there direct to consumers and say, hey, you saw the guy on the field the other day, he uses this on his knee. You should be using it on your knee too. I mean, good grief.

We see commercials all the time, not necessarily for RockTape, but just any kind of, I wrap my knee in this, I, I put this on my elbow. It makes me feel better. It makes me run faster, jump higher, whatever it is. We are bombarded with these. This is a huge market for these companies who are selling these products out there, knowing in many cases that they don’t do anything to actually help the consumer.

Scott Hardy:                          Right. Because when you’re wrapping something, you know, you’re, you’re putting all that pressure on over and over. While with the kinesiology tape, you always see those strips, either an x or straight up and down. You probably saw it if you’re watching Wimbledon, you know, you saw it on some of the arms and the shoulders of some of these athletes that are trying to use it to give a little extra support. But according to this class action, there’s just not enough science to support using this and trying to use this to treat your injuries and paying all that extra money to treat your injuries instead of just either taping up or as you said, using a brace or doing something like that. Don’t, you don’t necessarily need to pay that big premium for special kinesiology tape.

Farron Cousins:                  Well, and that’s exactly what happened here. I mean, I think in the complaint, it says he paid, he paid $18 for this tape, $18, you know, just to, to slap a piece of tape on a muscle here. That’s a big price. That is a premium, but it’s because, you know, as the thing said, the, the product RockTape is marketed as “superior to other tape products with packaging that claims, unlike conventional tape, which constricts blood flow, RockTape lifts the skin away from the muscles, which increases blood flow.” And as you pointed out earlier, there’s no science to back that up at all.

Farron Cousins:                  Well, if anybody out there uses this product or knows somebody who does, please do follow the link in the description of this video. Head on over to the topclassactions.com and while you’re there, make sure you sign up for their weekly newsletter. Scott Hardy, Top Class Actions. Thank you very much for talking with us today.