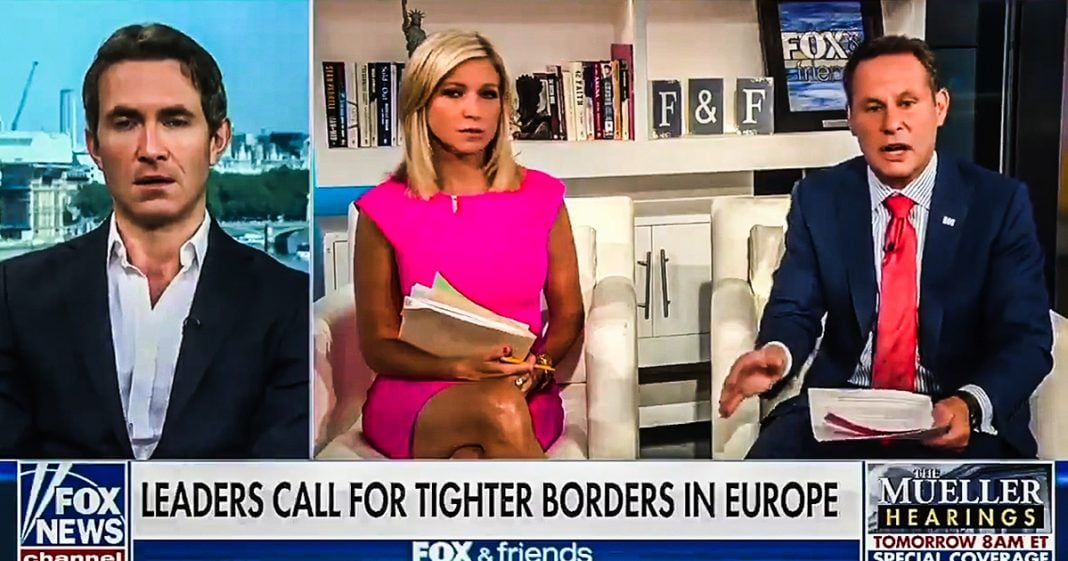 Fox & Friends host Brian Kilmeade let a major Freudian slip happen on Tuesday morning, when he said that we don’t want immigrants coming in and changing the “color” of the country. He quickly corrected himself and said “culture” of the country, but that statement is just as bad. Ring of Fire’s Farron Cousins discusses this.

Farron Cousins:             Fox News and specifically Fox and friends is not really known for their honesty in reporting. But every now and then they do let a little nugget of truth slip out. And that’s actually what happened yesterday with Fox and friends. Co-host Brian Kilmeade. Take a look at the little bit of truth that Kilmeade accidentally spoke.

Brian Kilmeade:            Oh good. So I’ll play it out for you because it’s here. If you are against open borders or if you are concerned about immigration, you’re racist, sexist, misogynist, whatever. What you do, it doesn’t matter. We’re not talking color, we’re talking culture. You’re in a country to keep that culture going. It’s not a matter of the color of your skin, it’s not your gender or your sexuality. We just don’t want to destroy the color of the, uh, the culture of the country.

Farron Cousins:             See that Little Freudian slip right there. We don’t want them to change the color of Ima culture of our country that Friday and slip tells us everything we need to know and basically just confirms everything we have known for a very long time, Kilmeade. And a lot of the other people on Fox News, and especially Tucker Carlson, they’re worried about the color of the country. And I understand that Kilmeade was going back and forth between color and culture and color and culture multiple times in the sentence before that. So that is why he screwed up. But here’s the thing, even if that was just an innocent little slip, the culture thing isn’t any better. Why? Why are people talking about that? Like we don’t want them changing the culture of our country. That is an exceptionally xenophobic comment to be made and Brian Kilmeade made it.

That’s not any better than saying we don’t want them to change the color of our country. And I guess the biggest question I have out of all of this is what exactly is American culture? Seriously? What is it? Is it 4th of July and hot dogs and obesity and baseball games? Is that American culture? Because honest to God, what do we have that’s like, oh, that is uniquely American. Of course, other than maybe those things. And of course starting, you know, regime change wars. That’s, that’s American culture I guess. But the United States has many others have pointed out over the years for hundreds of years, we’re a melting pot. We’re a little bit of a mix of everything. We’re a Mutt and sometimes mutts are the best dogs out there and there’s nothing wrong with being that way, but we are who we are as a country because we have welcomed other people in.

You know, right there in New York, we’re Kilmeade ish. You have all these great and wonderful sections of that city, you know, basically huge populations of different ethnicities, different cultures. And it’s to be able to just walk down a couple of blocks and suddenly it’s like you’re in a different country, it’s awesome and it’s wonderful and those people are right there contributing to the economy of the United States. Kilmeade, He doesn’t like that. He doesn’t like their culture interfering with his culture. But that is again why I asked the question, what exactly makes American culture? What do we do uniquely as Americans that other people know us for? When you go to other countries and ask them, I promise you, you’re not going to like the answers that you’re going to get. So how about we ditch all of that horrible stuff. The US is known for what other people view as our culture and embrace the culture of being the melting pot without having to worry about somebody changing the color. Oh, I mean, culture of what the United States really is.