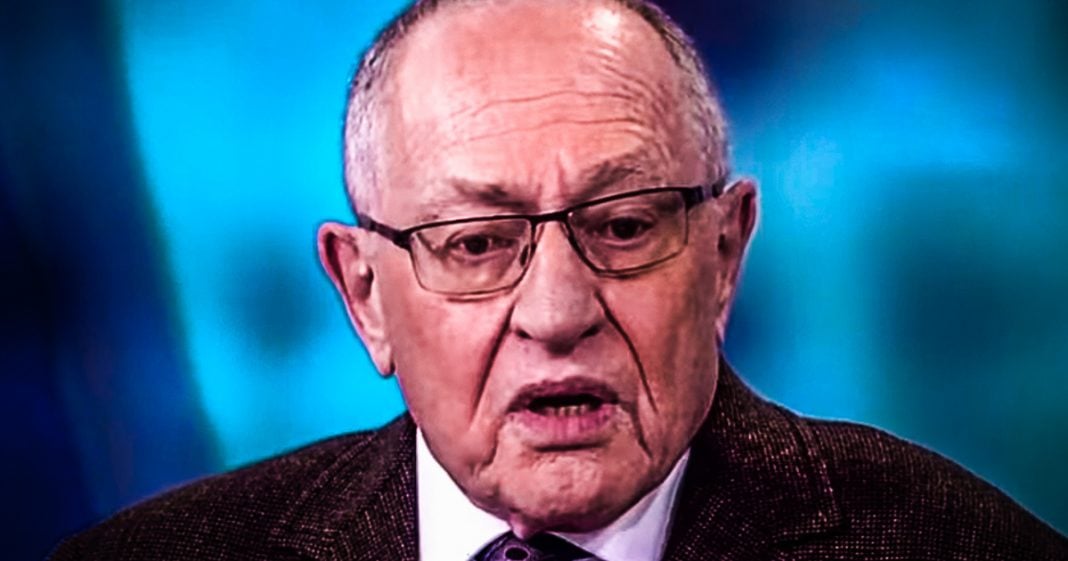 Attorney and law professor Alan Dershowitz has a pretty significant breakdown on Twitter over the weekend, where he accused prosecutor David Boies (the prosecutor going after Jeffrey Epstein) of having inappropriate sexual relationships outside his marriage. Dershowitz is panicking as more and more attention is paid to Epstein because he’s also getting a share of the spotlight that he never wanted. Ring of Fire’s Farron Cousins discusses this.

Harvard law professor Alan Dershowitz has had no problem being in the spotlight a, you know, over the last few years. He loves going on Fox News and defending Donald Trump, being a legal analyst for all the big major networks. But one thing he is not happy about is all the attention he’s getting right now because he, along with Jeffrey Epstein, has been accused of having sex with underage girls and this past weekend, Dershowitz actually went on a bit of a tirade on Twitter because he’s furious about the fact that at least one woman has come forward saying that while she was an underage, a, I guess, sex slave for Jeffrey Epstein, she was also forced to have sex with Alan Dershowitz. That is the claim that this young woman is making. Dershowitz says it’s all made up that it never happened. One of his excuses that we talked about last week was that he claims he kept his underwear on the whole time during the massage.

So there’s no way any part of him could have been near that young girl, but his Twitter tirade this past Saturday goes a little deeper. You know, he’s starting to hit on some personal notes on the prosecutor, or I guess actually attorney representing one of Epstein’s accusers up there in New York. Man by the name of David Boyce. And this is what Dershowitz tweeted out on Saturday, directed at that attorney David Boies’. Here it is.

“He is also aware that there are soon to unsealed emails and a book manuscript in which my false accuser admits she never had sex with me. I will swear under oath that from the day I first met Epstein until today, I have had no sexual contact with any woman but my wife. 2/”

“I have challenged Boies to swear that he has not had inappropriate sex contacts with women other than his wife during the same period. He won’t because he has a terrible reputation with regard to inappropriate sex. How dare he falsely accuse me. End/”

Well that’s all well and good Mr. Dershowitz. But what does that have to do with anything? Right? How does that pertain to this case? How does David Boies’ possibly being an adulterer have any bearing on whether or not you engaged in illegal sexual activity with underage girls in the state of Florida or New York? It’s not related whatsoever, so that’s why it’s a little odd and awkward that you would even bring it up because that’s classic deflection.

It is a psychological defense mechanism because you know you don’t have much of a defense to begin with. That’s why you’re engaging in this infantile behavior. This is exactly what Donald Trump does. Maybe that’s why you like to defend him so much because you share so much in common psychologically, but that is exactly what you’re doing. You’re trying to say, look at me. No, no, no. Look at the, the attorney up there, he has had sex with other women who aren’t his wife. How dare he, right? I mean he is the bad guy. He is the one who should be on trial, probably. Dershowitz, if you’re innocent, let it be right and all this is going to come out in the wash. If there is no evidence against you, you’re not going to be charged. You haven’t even been charged yet. You’ve been accused, but you are freaking the hell out. Just like a guilty person typically would. You’re not taking this in stride. You’re not cool, calm and relaxed. You’re not offering well thought out defenses of what you’ve been accused of. You’re panicking because you understand that whether you did it, whether you didn’t do it, you are actually still in that mansion knowing that these women were underage and knowing that they were forced to have sex with men at those parties. You may not have been one of those men, but you were Dang sure watching it and there when it happened.