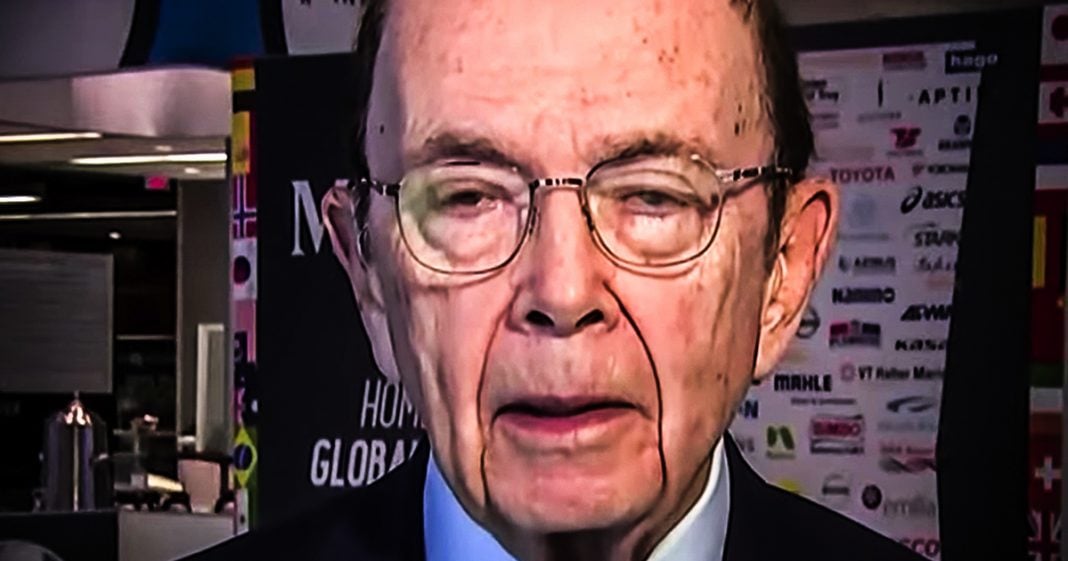 Wilbur Ross, Donald Trump’s Commerce Secretary, has a nasty habit that aides can’t seem to break him of. Ross has been caught repeatedly, and sometimes even on camera, falling asleep during cabinet meetings. The 81-year old Trump official can’t seem to pay attention, and aides have now tried to schedule meetings around Ross’s sleeping schedule so that he’ll stay awake. Ring of Fire’s Farron Cousins discusses this.

Politico is reporting that Wilbur Ross, Donald Trump’s commerce secretary has a very nasty habit that his aides are trying to get them to kick. And the nasty habit is Wilbur Ross likes to actually fall asleep during meetings. Now, there have been multiple times on camera or in photographs where Wilbur Ross has been pictured at a meeting where man, it really looks like this man is asleep. Well now according to this report, uh, and they spoke to a current and former aides at the commerce department. Uh, they said, yeah, he definitely is actually falling asleep at meetings and it’s actually become a massive problem because we’re now having to try to schedule meetings around his sleeping schedule. We have to keep them short. We have to keep them to the point, you know, kind of like they do with Donald Trump. He loses interest. But Wilbur Ross just falls the hell to sleep.

Now, Wilbur Ross is 81 years old and some of the articles talking about this, as, you know, he’s just an old man. He didn’t have the stamina. Why? I got to tell you this too. My grandmother is 82 years old. She gets by taking one 15 minute nap in the middle of the day. Spends most of her time outside gardening up and down constantly. No, you can be spry and active. Even in your eighties Wilbur Ross has just a piece of crap who doesn’t care about what he’s doing or his job. That’s the difference. His age has nothing to do with it. He’s a lazy lout and this is what he does because he doesn’t care. The Commerce Department in case you’re not aware of it, is actually very important here in the United States. They’re in charge of going out and collecting economic data, demographic data so that the government can make decisions so that they can enact policies based on that.

They’re in charge of job creation for the federal government. They’re in charge of making sure we don’t enact any harmful trade policies and Wilbur Ross is the just sleeping through the entire year. I mean, we’ve got rip Van Winkle sitting there trying to run our friggin’ labor department, our Commerce Department and all of that. This is nuts, but this is exactly what we would expect from the Trump administration. If you’re not corrupt as hell, then you’re probably just sleeping through it. And maybe that’s why Wilbur Ross isn’t quite as corrupt as the rest. He’s still corrupt, but you know, maybe not to the extent of a Betsy Devos or had Ben Carson, and maybe that’s just because they can’t get Wilbur out of bed long enough to be as corrupt as he’d like to be.