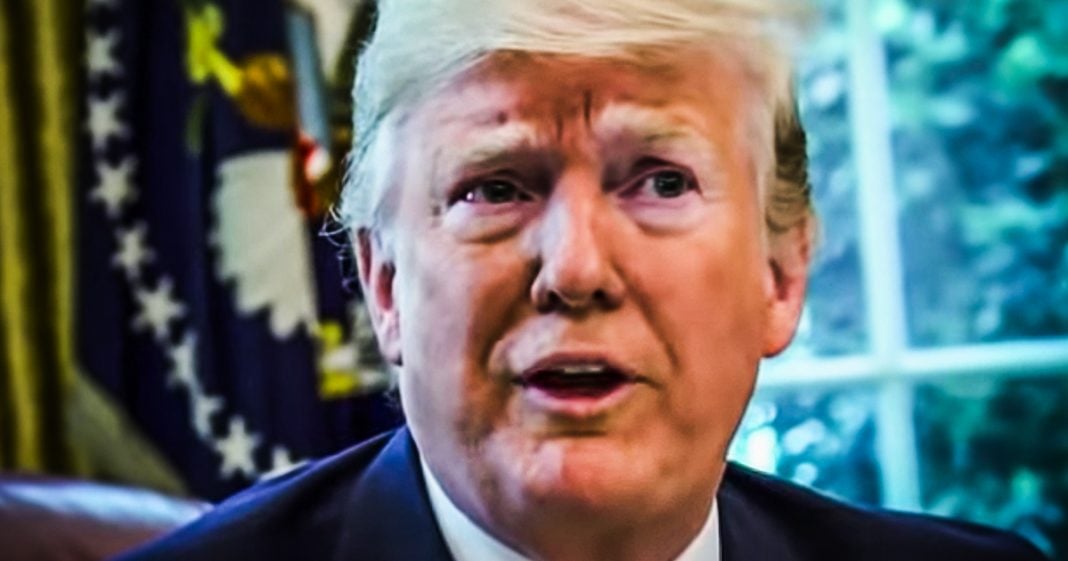 On Monday, Donald Trump went into yet another unhinged Twitter tirade where he claimed that he never had talking points for his disgusting July 15th address to the press. But we’ve all seen the pictures. They exist and they are real, and they also show that the President doesn’t know how to spell at all. But this is not the first time that the President has told us to deny reality, and it likely won’t be the last. Ring of Fire’s Farron Cousins discusses this.

Donald Trump is still furious over the fact that the Washington Post reported this past weekend that his age, his staffers, even people like Kellyanne Conway believed that he’s crossed a line with his attack on the four congresswoman who they’re now calling the squad and on July 15th you know last week, right in the middle of all his tweets, which he’s now sent as of this recording, 45 tweets in the past week where he’s mentioned these four congresswomen. I mean he is absolutely obsessed with them, but yesterday he tweeted out a rebuttal to the Washington Post saying, you’re absolutely wrong about my little g July 15th press conference because I didn’t have notes. I didn’t have talking points. You are absolutely lying here is what he said.

“The Amazon Washington Post front page story yesterday was total Fake News. They said “Advisors wrote new talking points and handed him reams of opposition research on the four Congresswomen.” Now really, does that sound like me? What advisors, there were no talking points,….”

“….except for those stated by me, & “reams of paper” were never given to me. It is a made up story meant to demean & belittle. The Post had no sources. The facts remain the same, that we have 4 Radical Left Congresswomen who have said very bad things about Israel & our Country!”

Yeah, that’s a great rebuttal except for the fact that the pictures say otherwise. The pictures very clearly show you holding talking points. In fact, some of the pictures are so crisp that you could actually see the words that they wrote for you to say. And we could see your little handwritten scribbles where you didn’t know how to spell words that I think even elementary school kids know how to spell today.

You’re, you’re asking us once again, cause it’s not the first time you’ve asked us to, uh, to deny what we see to deny reality itself. We see these pictures. Here they are again folks, these are the pictures of that July 15th press conference. Donald Trump has holding notes filled with talking points. He is underlying the best parts. He has written stuff out in the margins. And he said in this tweet that that didn’t happen. He said, that’s not true. It’s fake news. He says, Donald Trump wants us to abandon reality. He wants us to all go live in his fantasy world where his approval rating as his idiot son claimed is 95% where the economy is kicking ass and people aren’t being hurt by his trade wars where all the people who are locked in those cages on the border, every one of them would have been a murderer had they not been stopped. That is the fantasy land in which Donald Trump lives and he is inviting us all to come in. Don’t go in that, that that’s the danger. That’s what a cult does.

Folks, this is Cult-like behavior. Sang the world out here is awful. Come into my world, right? Everything’s awesome in here. We’ve got like tables filled with Big Macs. It’s cool, but we don’t get to go into that world. We have to live out here. In reality, we have to see the damage that his policies are doing. We have to see the hate that he is inspired throughout this country. We have to see the farmers going bankrupt. We have to see the businesses closing their doors. We have to see the children locked in cages. That’s, that’s reality. But in Donald Trump’s world, that’s the fantasy. And everything he says is the only thing that’s real. This is a form of psychosis. This is not leadership. It’s a mental illness.