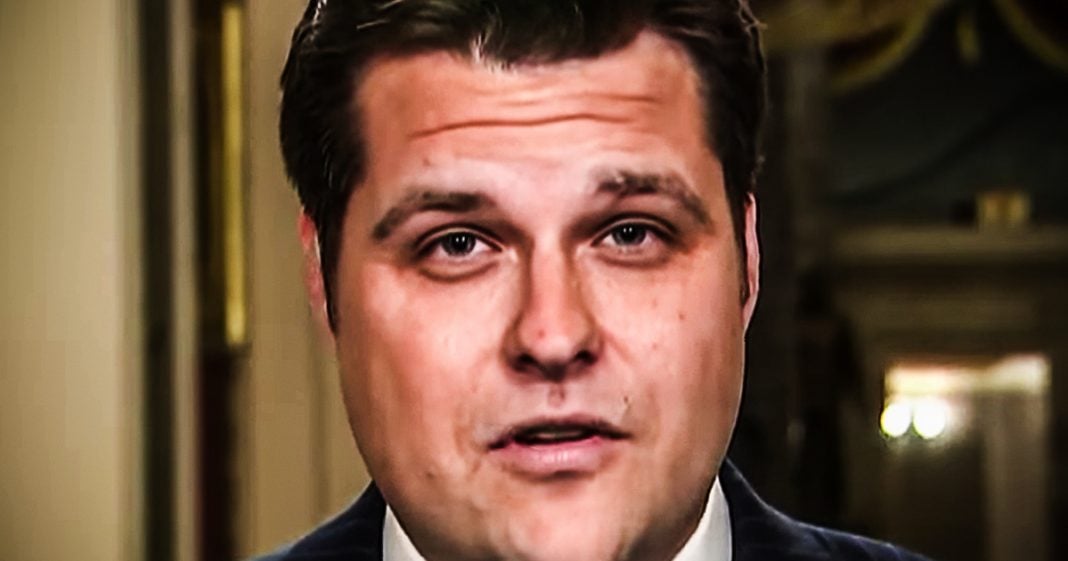 In a deranged tweet on Monday, Republican Congressman Matt Gaetz said that he’s having fun “triggering” liberals while in Congress, and that he intends to keep doing this. This is not what this guy was elected to do, but his history already told us that he isn’t a serious, mature person. If he were running anywhere other than his extremely safe district, nobody would ever have known his name. Ring of Fire’s Farron Cousins discusses this.

Well folks in the latest episode of “My congressmen is a bigger piece of crap than your congressmen,” I would like to point you to a tweet that Republican Representative Matt Gaetz from Right here in Florida’s first district sent out on Monday. It said,

“The Left is fighting hard, but we will fight harder. We will OUTSMART them, we will OUTLAST them. We will TRIGGER THEM and WE WILL PREVAIL. We are taking our country back and we are doing it with a big patriotic SMILE. There has never been a more FUN time to be a conservative!”

“We will TRIGGER THEM.” Is that, is that really your goal in office, Matt Gaetz, is that what you think you were sent to DC to do? To just trigger people basically to just piss them off and then smile at it? There’s never been a more fun time to be a conservative. Let me ask you, when you were walking basically right down the street from where I’m at right now in Pensacola, and you got milkshake thrown on you.

Was that fun? Did you have a big patriotic smile on your face when that happened? In this very conservative town. I don’t think you did. Did you have a big patriotic smile on your face and your mugshot for your DUI? Because I don’t remember seeing that. I remember seeing a very sad individual who was waiting for daddy and his political connections to come and bail his ass out because that is exactly what happened. That’s why you weren’t actually punished. But Matt, we’ve seen the mugshot and in case you haven’t hear it is just to remind you, is that what a big patriotic smile looks like? Is that what the people in this area of Florida voted for? Sadly, yes to the latter question. They did vote for this. They knew it existed, but they’re starting to wake up a little bit. You’re starting to get a little pushback and a little bit of resistance and I can promise you, Matt, if you were running for office in any district other than this one in this country, nobody would even know who you are because you’d never, when you got where you are in life because of Daddy’s power and daddy’s connections.

And again, for those who don’t know Matt Gaetz, his daddy was a very powerful Florida politician for a very long time, had connections all over the state. And that’s why little Matt didn’t go to jail for his DUI. And instead is a sitting congressman bragging about how much fun he’s having trying to trigger the liberals. You also say you’re going to outsmart us, Matt. “You couldn’t outsmart a breathalyzer,” to quote Cliff Schecter from Twitter earlier this morning. So how in the hell are you going to outsmart these people sitting in Congress with facts and figures and statistics? The people that you like to say don’t know what they’re talking about and they’re making absolute fools of you. And every one you parade into Congress to say that conservatives are being penalized or punished or victimized in some way. They are kicking ass, but you are just an ass.