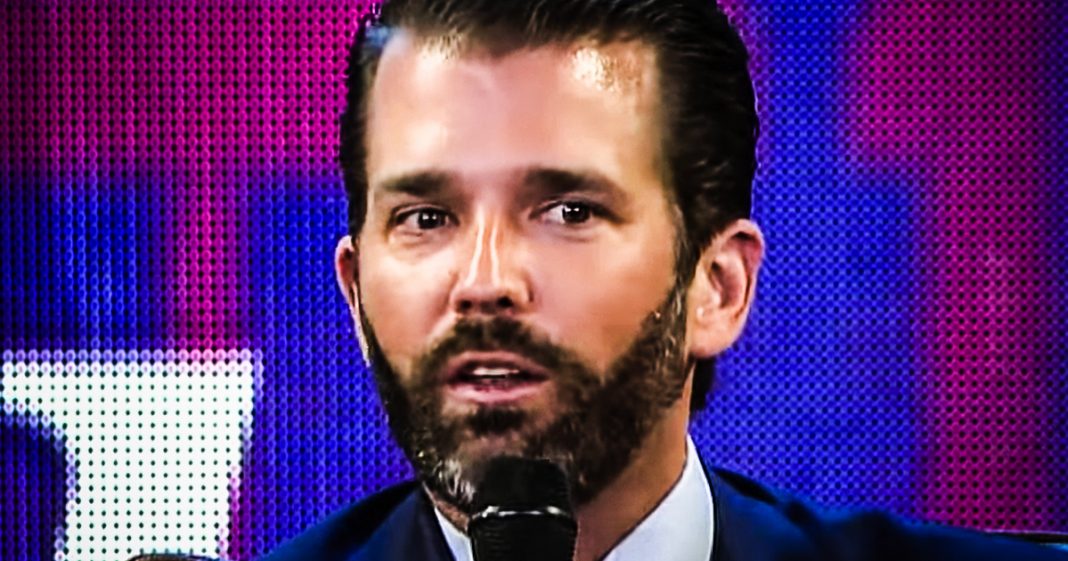 Donald Trump, Jr. has a new book hitting the shelves on November 5th, and he borrowed the title from several failed comedians trying to gain a new audience. The book is titled “Triggered: Why The Left Thrives On Hate And Wants To Silence Us,” following people like Dennis Miller and Owen Benjamin who have titled their own comedy specials “Triggered.” The book is completely lacking in self-awareness, and is a pathetic attempt to get his dad reelected, as Ring of Fire’s Farron Cousins explains.

So last week I did a video talking about the fact that Eric Trump had wants again, reclaim dethrone as the dumbest offspring of Donald. Well not to be out done. His brother Donald Trump Jr. has now announced that he has a new book coming out on November 5th of this year, just in time for the holiday shopping season in case you have a relative that you absolutely hate and want to get them a horrible present. But nonetheless, he’s got a new book out and he actually borrowed the title, uh, from several different failed comedians who have titled their ridiculous comedy specials the same thing. The book is called, Triggered: How the Left Thrives on Hate and Wants to Silence Us. Now, in addition to a, this title lacking any form whatsoever of self-awareness for Donald Trump. I do want to talk for a second about that title Triggered, right?

Because that’s what Republicans and conservatives always say they do. The liberals were rather we’re triggering them, right? You’re the same people who were crying about a week ago, maybe two weeks ago about the Betsy Ross shoe, like had such a temper tantrum that you tracks. He tried to take away Nike’s subsidies about this. You’re the people who were throwing Keurigs off your balconies because they wouldn’t advertise on Fox News. You were blowing up your Yeti coolers that cost hundreds of dollars cause they wouldn’t advertise on Fox. But yeah, no, no, no, no. The liberals are totally the ones who are triggered on this and hopefully your book will do just as well as the comedy albums that it’s named after. Specifically those from Dennis Miller and Owen Benjamin, you know those titans of comedy here in the United States who also like to call their thing triggered. But let’s get real for a second. The book is actually supposed to cover topics such as big tech censorship and of course his father’s wonderful vision for the United States and that’s what this is really about.

Donald Trump Jr. is planning on traveling the country campaigning for his father, going out there talking to people, telling them how much better their lives actually are, even though they can all pretty much tell that really things are not better for them at all. I mean, statistic after statistic following studies, a all kinds of reports. Yeah, average Americans are not doing better. We’re doing worse. But if Trump Jr. plans on campaigning on Wall Street, then hell yeah. That talking points going to work because those folks are doing phenomenal. They are living high-on-the-hog and they would buy up every copy of this book just to make Trump Jr. look like a success and that is exactly what’s going to happen, right? There’s basically a zero chance that this book is not unfortunately going to become a best seller. You have lots of MAGA hat wearers out there who are going to scrounge up enough money to go buy a copy of this even if it means having to forego dinner that night because they just want to support the Trump family.

And if all else fails, Donald Trump Jr. will do what all other rich people do when they write a book. They’ll buy tons and tons and tons of copies of it for themselves and then ship them off to a warehouse. Never to be seen again. But Hey, it actually does show that you sold more copies of your book. So Kudos to you. And in case anybody was wondering, no, it is in fact not a coloring book. But another issue I want to talk about then he wants to talk about is big tech, right? He’s going to talk about big tech in this book. And I, I don’t think there’s going to be much talk about innovation and how wonderful things can be if we, you know, become the innovators that we’re supposed to be here in the United States. You know, that, that we tell children you can grow up, you can be anything, you can make anything, you can build the future.

I don’t think he’s talking about that. I think what he’s going to talk about, obviously based on the title of the book, How they want to silence us. Uh, he’s going to talk about the alleged censorship that is in fact not actually happening from these tech giants. And let’s be real clear again, and I’ve mentioned this multiple times and apparently I have to keep mentioning it. Uh, these tech companies typically give far more money to conservative politicians than they do democratic politicians. So if there is any bias that actually exists, it’s in favor of the Republican Party. But it all boils down to the one thing that I started with Donald Trump Jr. may be the dumbest Trump kid once again, after only a week reclaiming the title from his brother Eric. And it’s because this title, this book, the entirety cover to cover that I’m sure somebody else had to write for him is completely lacking in all self-awareness. How the left thrives on hate buddy. Your Dad is sitting in the White House today only because of hate. His poll numbers are dropping right now because he believes that he can continue to thrive on hate and according to all the polls out there, that’s not going to bode well for him in 2020 even if you do hit the road and try to act like you’re a normal guy for five minutes.