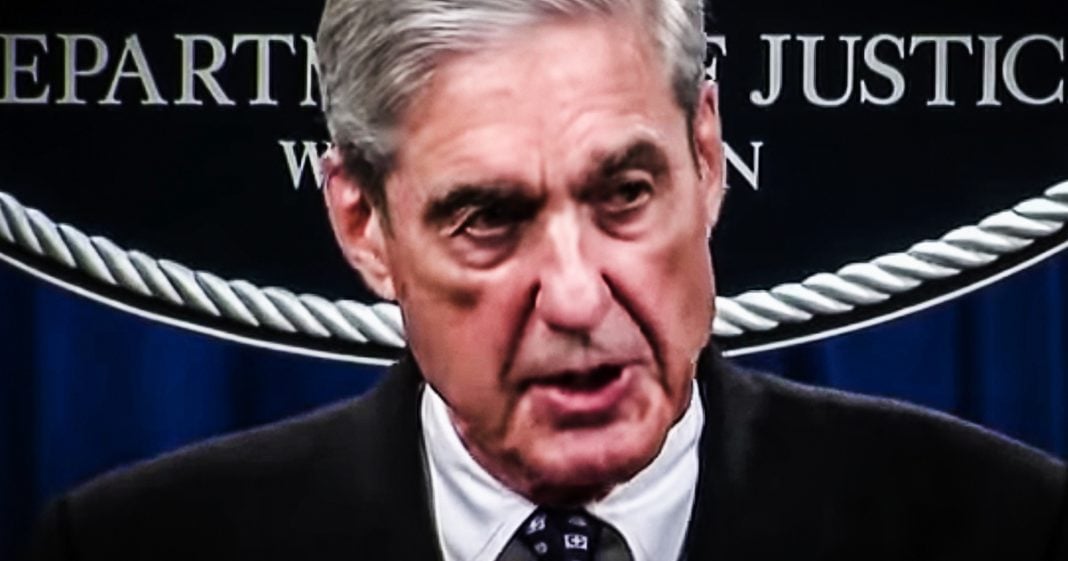 House Democrats are planning an all-out media blitz before, during, and after Robert Mueller’s testimony tomorrow, but this may prove to be a dead end for Democrats. Mueller has made it clear he’s only going to reiterate what’s in the report, and the DOJ is trying to limit what he can even say about that. If they want to take Trump down, they should be taking his bank info and tax returns from New York, which they have repeatedly refused to do. Ring of Fire’s Farron Cousins discusses this.

Well folks, tomorrow is the day. Most of us really didn’t even care if it was going to happen. It’s Robert Mueller going to testify before the House of Representatives and the reason I say most of us didn’t care if it was going to happen is because at one point I said yes, Robert Mueller should testify, but then Robert Mueller came out and told us that if he ever testifies, he’s only going to basically say exactly what’s in that Mueller report. The DOJ has already been working overtime to make sure he doesn’t even talk about anything. Not only outside of the report, but he can’t talk about anything in the report that’s redacted. So I guess the bottom line is what’s the point, right? He’s not going to give us any new information. The people who want to hear something bad are going to tune in. The people who don’t want to hear anything are not.

Fox News is going to spin it as a positive for the president. MSNBC is going to spin it as a negative for the president and in a couple of days everybody’s going to forget that it even happened. But the Democrats, the Democrats in the House of Representatives led by Nancy Pelosi and Adam Schiff are planning an all-out media blitz starting today to raise awareness about the Mueller testimony that’s coming up tomorrow. What they’ve done is they have boiled down the Mueller report from 400 some odd pages into a little six page bullet point list that they’re handing out to every single democratic member of Congress so that they can use it in interviews. They can tweet stuff out, they can just be ready to attack, attack, attack, and to their credit, this is a good idea. I do support that. I think that is smart. They’re going to have people all throughout the testimony waiting on social media, on Twitter to tweet things out, to send out statements to reporters and yes, that is the kind of rapid response that the Democrats have been sorely lacking and I do commend them for this particular effort.

I just think it’s fruitless. Again, Mueller’s not going to give us anything more than what is written on those pages. He is not going to go into depth on anything because he already told us he’s not going to do that. But what’s weird here is that Politico’s reporting that the Democrats are doing this and trying to highlight this so that they can basically shame republicans into doing something about election security. Because after all, we do know Mueller did say, Hey, there was interference in 2016 and something needs to be done about that. That is, you know, the big takeaway that I’ve got for you here today, it’s what he said in that press conference there was election interference in Democrats think that, Oh, if we highlight all this, if we, if we publicly shame them, the Republicans are going to fall in line.

Are you stupid serious here? Are you honest to God that naive? You think you can shame Mitch McConnell into finally voting for election security? I mean even with support from Republicans, the man is blocked at every turn. He doesn’t care because they understand that any kind of interference in the election is going to help them. They want it to happen. Guys, this is ridiculous, but more importantly, we have to stop pretending that Robert Mueller is somehow going to save us from Donald Trump because it ain’t gonna happen. You want to take him down, then you should have listened to New York when they said, hey, we’ve got these banks over here that say they’re willing to turn over documents. Do you want them? No. We want all the banking records. Not just New York. Okay, totally understandable, but we also just passed a law saying you can have his state tax returns.

How about those? No, we want all the tax returns, not just New York. All right, keep doing what you’re doing. Then keep failing at holding this man accountable because that is exactly what you’re doing. You want to take him down, go for the tax returns. Go for the banking records because that’s where you’re going to find the real meat and potatoes. We already know that. You’re not going to get them on any kind of collusion from the Mueller report. The DOJ is not going to pursue any charges on obstruction of justice. Nancy Pelosi has made it clear. She’s definitely not going to impeach this guy based on the Mueller report. So what the hell is the point of Mueller’s testimony? Honestly, I just want somebody, anybody out there to give me an honest answer to that question.