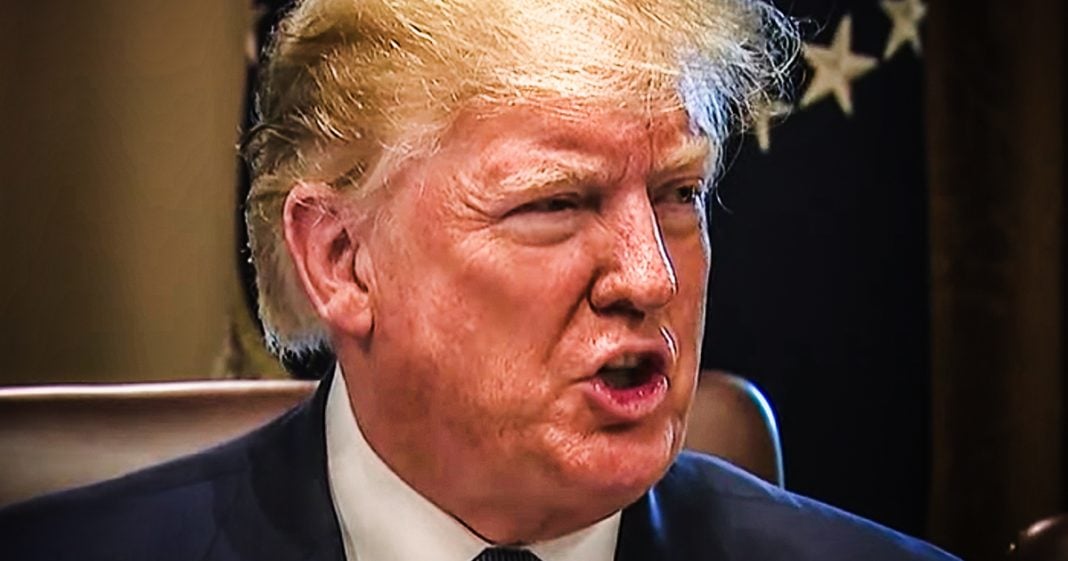 According to new reports, staffers for Donald Trump believe that his tweets about four Democratic congresswoman have crossed a line, but none of them are prepared to do anything about it. This is the same story over and over again – his staffers think he’s a monster, they hate their jobs, then they do nothing and get more depressed when the next outrage happens. Ring of Fire’s Farron Cousins discusses this.

Donald Trump was freaking out over the weekend after the Washington Post reported that a lot of his staffers, including a lot of higher ups staffers and some of his buddies over in the Senate have been pretty annoyed with him and his tweets. They think that he has quote crossed the line and the Washington Post spoke to 26 White House aides advisers, lawmakers, and others involved in the response. Donald Trump on Sunday was telling us, this is fake news. They didn’t talk to anybody. Nobody was there. There’s just not, nothing’s true. Well, it is true. They did talk to people and you did in fact crossed the line with your tweets that you’re still sending out as of this morning. Some of the people that they talked to who were Kellyanne Conway, one of the PR people they talked to was Lindsay Graham and according to the report, both of these people happen to say that, no, Mr. Trump, your tweets crossed the line, but it’s nothing for these people.

You know Kellyanne or Lindsey Graham to say like, Eh, you don’t necessarily agree with what he tweeted, but I’m just going to support them anyway. It’s actually, it’s the staffers where this has pretty much a bigger issue, right? Because how many times over the last two years, if we had to sit here and do stories about Donald Trump’s staffers, you know, the, the average people working in the office, maybe they’re getting copies for, maybe they’re just, you know, running errands or whatever it is. But there are staffers and they absolutely hate the man. But unfortunately, and this is another great example of it with this story, they’re not willing to do anything about it. Now. They already know because we know, because stories have come out telling this over the last two years, they really can’t find jobs anywhere else. So working in the Trump administration is not helping them to get a better job in Washington, DC if they want to stay in the political arena.

Staying with this man, working for him at all, in any capacity is career poison. But they’re doing it anyway, even though they hate it. They hate the things he says on Twitter. They think he’s crossed the line. They think he’s gone too far. They think he’s disgusting, but they’re not going to stand up to them. They’re not going to quit their jobs, they’re not going to do anything about it. So what’s the point, I guess is my point. Why do we have to keep seeing these stories? Oh, Trump staffers are so upset with him, but they’ll do nothing about it. Oh, poor Trump staffers, you know, staying longer with Trump is preventing them from getting jobs in the future, but they won’t quit. I don’t have sympathy for these people anymore. I really don’t. And I think back, you know the first segments we were doing two years ago on this where I said I feel really sorry for these people.

Yeah, that’s gone. And it’s not coming back at this point you know exactly who Donald Trump is. You know exactly what his beliefs are about non-white people. And if you choose to continue to work there, if you choose to to be a part of it or if you apply for a job there, you are not only condoning it, but you yourself are embracing it. In other words, you own it. You own this, you have an option. You always have the option of walking away. You could Tinder your resignation and walk out that door and be off the property in less than 10 minutes and then it’s done. Then it’s behind you. Then maybe it’s not going to be career poison for you when you go out there and tell your future employer, listen, yeah, I thought it’d be a good thing to work in the White House. Turns out I was working for Wacky McNutt Job and I decided I couldn’t take it anymore. It wasn’t going to stand for this and I stood up, told him no when I walked out because that’s the kind of stand up person I am. Yeah, that’s going to help you get a job. But going into an interview and saying like, yeah, I mean, I worked for them and yes, yes. I’ve, I’ve seen the tweets. Yeah, I know. I, we, you know, what could we do though? The person doing that interview is going to say, well, thank you very much for your time. Uh, you’ll hear from us, right? You have a choice. And if you’re choosing to stay, then you’re choosing the life of hate.