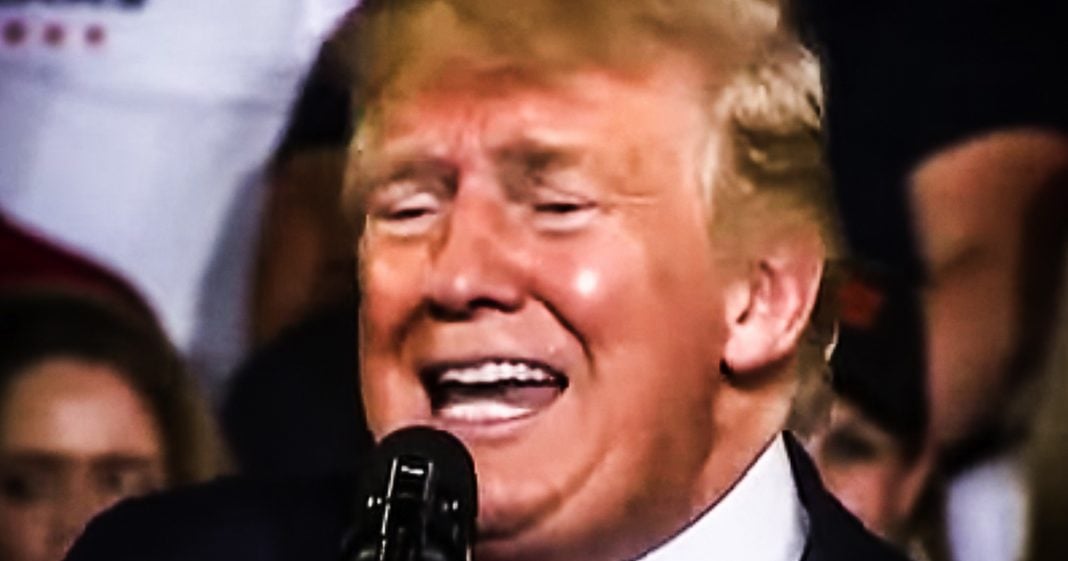 Donald Trump believes that he has found a winning strategy for 2020, but the reality is that this is the same strategy he deployed in 2016, and it’s the same strategy Republicans have employed for decades. They want Americans to hate “the others,” though the “others” have taken on different forms over the years. Ring of Fire’s Farron Cousins explains who Trump’s new strategy is the same as the old ones.

So Donald Trump has settled on his 2020 strategy, and it’s going to be hatred of people who he thinks don’t belong here in the United States. Uh, basically, ever since last Sunday when he tweeted out the A, if you don’t love America, go back home to the four Democratic Congress, women, uh, who he’s been quarreling with. He has retweeted that and said different iterations of it multiple times, just in the past nine days. And he’s not going to stop because again, this is his new strategy. This is how he’s running in 2020 and his, a lot of people have pointed out this is not necessarily a strategy. It’s just good old fashioned racism. And they’re correct. That is what is happening right now. But it’s also what’s been happening with the Republican Party since the 1980s. The same strategy is the same as the old. Here’s what I mean.

Since 1980, the Republican party, whoever the Republican candidate has been, including those in the House and Senate, they win elections by making the American public hate the others. Now the others take many different forms over the years with Donald Trump, it’s been immigrants. You know, those are the others. They’re coming over here as he said, to kill you, to rape you and then take your job with George W. Bush. The hatred of the others that was prevalent during his administration was Muslims. Now, a lot of people have told me when I say that like, no, no, no. George W. Bush, I hate him. But he never said bad, bad things about Muslims and made it clear that there’s a lot of good Muslims. He though really were you paying attention to what was happening back then and watching the rise in hate crimes against Muslims happen, the open bigotry towards Islam that was happening in this country.

George W. Bush may have said a few nice things about Muslims during the years, but he made it clear that they were the enemy in all of the enemy fit that bill. You have to pay attention, you have to read between the lines. And that is exactly what happened. So during the Bush years, the others where the Muslims go all the way back to Ronald Reagan, who were the others? The Welfare Queens, right? That was the image he projected out there. The Lazy African Americans sitting back not getting a job and getting their check from the government every month, living high on the hog. Those were the others, and that’s what Republicans do. That’s how they win campaigns because it’s not just the hatred of the others. They don’t just go out there and say, these are bad people. Each time there was a different threat represented by the others. With Reagan, it was there taking your hard earned tax dollars.

They’re making more money than you. They’re living a better life than you and they get to be lazier than you. That’s not fair. Is it? Vote for me and I’m going to fix it. With George W. Bush, it became, they want to kill you. I am the only one that can keep you safe from the others. Vote for that other guy, John Kerry in all hell’s going to break loose. We’re going to have sharia law here in the United States. That’s what Fox News was telling us during those years as something they keep telling us about Democrats. By the way, with Donald Trump, it’s the immigrants. They’re taking your jobs, you’re losing your livelihood, and you may even lose your life because of these immigrants because they’re so darn violent. But that is how Republicans have won elections since the 1980s this is not a new strategy that originated with Donald Trump. This is not even something that he has perfected, but it is what Republicans have done for nearly 40 years because it’s the only thing they know how to do because they don’t know how to do policy. They don’t know how to provide you with something that would make you say, you know what? I like their position on this better than the other side’s position on that. Instead, they say, your life probably sucks and it sucks because of these other people vote for me and I’m going to flip the script. Their life will suck and yours will be wonderful. That has been the republican strategy since 1980.