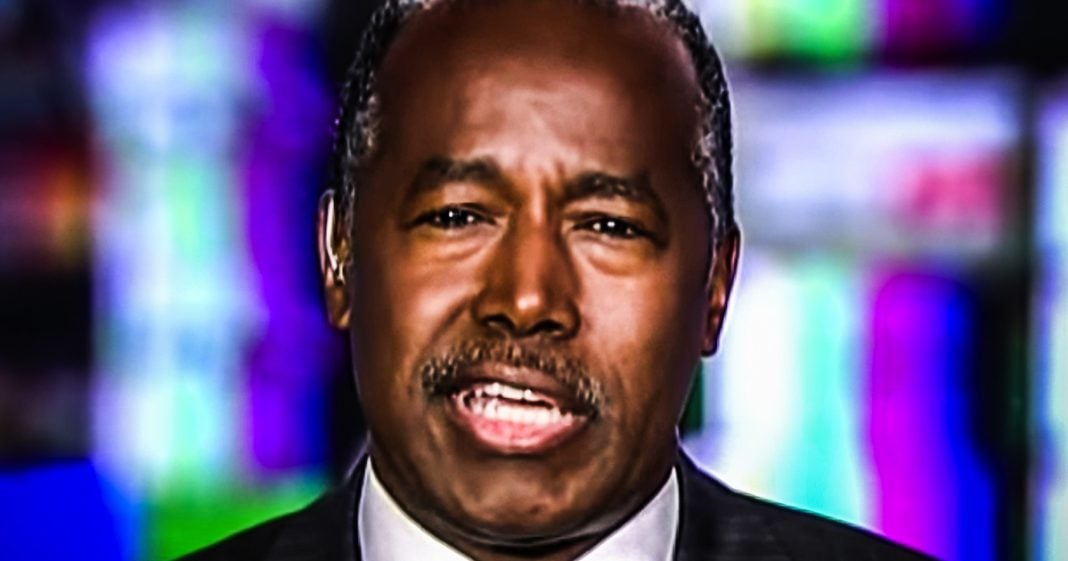 During a recent appearance on Fox News, Secretary of Housing and Urban Development Ben Carson admitted that things aren’t as great for black families in America as Donald Trump repeatedly says on Twitter. Carson actually admitted that home ownership among African Americans is at an all-time low, and he blames that deceitful practices of big banks. This might be the only honest thing Carson has said since retiring as a surgeon, as Ring of Fire’s Farron Cousins explains.

Over the weekend. Ben Carson, the Secretary of Housing and urban development, let a little bit of truth out during an interview with Fox News host Maria Bartiromo. And during this interview, Ben Carson actually said a lot of things that were not only honest, but things that I actually agree with them was kind of shocked that Ben Carson would ever admit something like this. And what Ben Carson admitted was that home ownership among African Americans here in the United States has reached an all-time low during the Trump administration. Not at all time low for the history of the United States, but just an all-time low for the Trump administration. And he said it’s because the banks have essentially for years and years and years been taking advantage, essentially acting illegally with regards to African American home buyers. Ben Carson is correct about that. Let me go ahead and read you the exact quote that Ben Carson said. He said,

“People took advantage of a lot of people who did not have a lot of wherewithal, in terms of financial knowledge about housing. And you know, by manipulating debt-to-income ratios and the various types of manipulations for credit that were done, they put people into houses that they couldn’t afford.”

Now some people might listen to that and think, oh, he’s talking about the people who took out these loans or they got houses, you know the mcmansions and then they defaulted. That was their fault for buying a house they couldn’t afford. No, it’s because the banks told them they manipulated the numbers enough to say, oh no, you can totally afford this. We can make it work for you. Don’t worry about a thing. This is within your budget because of this, because of that, because of these other things that we’re doing over here, and we’re going to say you this house, but what we’re not going to tell you is that we’re also going to bet that you’re going to foreclose on it or that you’re going to be foreclosed upon. Excuse me. And when that happens, we’re actually going to make more money than if you would’ve bought the house outright. That’s how that little scheme worked. The bedding, the insurance they took out, the claims they get when the homes get foreclosed upon. That sparked a ton of civil lawsuits, which banks lost spectacularly. But overall, again, Ben Carson’s 100% right? African Americans were a huge target of the predatory banking industry. And I’m not talking about payday loans, I’m talking about, you know, the Bank of Americas, the Wells Fargos, the HSBCs, those banks, the banks you see on every corner. Those are the ones who were engaging in some of these activities.

And now according to Ben, it’s kind of come home to roost. African-American’s never were able to rebuild after that. And that’s why home ownership among black Americans is now at an all-time low during the Trump administration. But another thing that he did by admitting this was countered Donald Trump’s claim that African Americans never had it better here in the United States. Black people doing better than ever. Trump tells us all the time on Twitter, low unemployment, great incomes, things are good for black Americans here in the United States. And then you finally have the one black guy working for Donald Trump come out and say, well actually, you know, in my department where I actually am able to look at these numbers and see things, things are pretty bad for them.

I am willing to bet that once more people realize, Ben Carson actually said this, not too many people even on the right watch, Maria Bartiromo, unfortunately for them, fortunately for the rest of us, but unfortunately for them, uh, once more people understand that Ben Carson said this, I imagined Donald Trump’s going to get pretty mad because I imagine the next time he tweets something out saying how great black Americans have it under him, people are going to say like, wait a minute, Ben Carson said opposite. Ben Carson said this isn’t happening. So who is lying? You or Ben? And that’s probably going to create a little bit of rift in that relationship there. But in this one particular instance, this one time, Ben Carson is completely correct, and to be honest, I’m fairly confident I’ll never have to make that statement ever again.