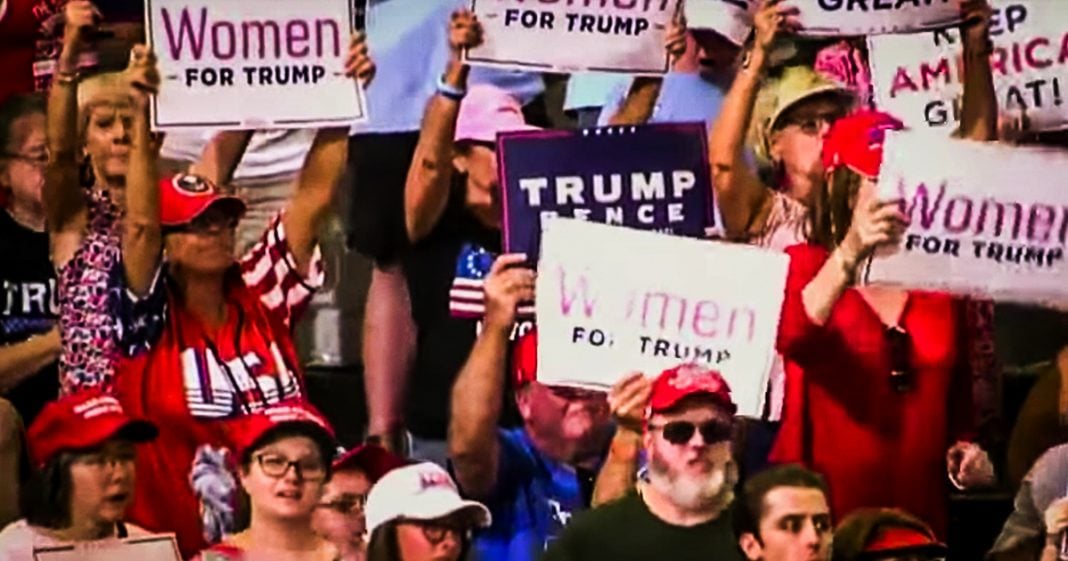 After watching what unfolded at Donald Trump’s North Carolina rally this week, along with his nonstop calls for people to “get out” of our country, it has become clear that there are certain voters that we simply can’t reach. And while some people think we have to maintain a certain level of “civility”, the truth is that these people would gladly stomp on your head if the opportunity arose. Stop playing nice with them, and start fighting back. Ring of Fire’s Farron Cousins discusses this.

Our good friend Ben Dixon, uh, sent out some tweets on Wednesday evening following the send her back chant at the Donald Trump rally and I want to share two of those tweets because they really spoke to me and they echo things that I have been saying over the last couple of weeks here. Here’s the first and it says,

“My filter is broken so I’m likely to lose a lot of followers and friends who are used to the kinder, gentler Ben. But all things considered, we don’t have time to worry about being nice.”

“Look man, those rednecks in that audience last night won’t be won over with any policy. They would gladly give up health insurance and die of diabetes-driven gangrene than to abandon a president who lets them be their full racist selves.”

And again, this is 100% correct. There is no arguing with these people. You know, the folks that sit there and chance send her back or lock her up or build the wall or spend their evenings watching Sean Hannity and Tucker Carlson. There is no reaching those people. You can beat them over the head with facts and logic and statistics and it’s not going to do a damn thing to change their mind. Now, over the years, I have received a fair amount of criticism and also a ton of praise for not being afraid to call people out, to sometimes get my hands a little dirty, to be angry and yell when it is appropriate.

But again, some people don’t like that. They say, ah, it’s hard to listen to you because you just yell all the time and you’re mad all the time. You know, I actually, I get a lot of that. Uh, when I fill in for David Pakman, he has a much different audience. And I do try to tone it down, but sometimes I talk about these stories and you know what? I get angry. I’m still driven by facts. I’m still driven by the logic. I’m still driven by statistics. I do my research, I know what I’m talking about and I have the numbers to back it up, but I understand that sometimes I can be a little harsh, but as Ben said, buckle up because it’s going to get worse from a lot of us. We’re pissed off now. We’ve been pissed off. It’s just that we have tried some of us probably more than others to hold back a little bit, but there was no holding back anymore, folks.

We can’t just let these people go out there and make these chance. Say that. Yeah, I love his comments. That’s why I voted for him and us sit here and be like, well, statistically, you know, actually if you were to look at, that’s not going to do it. That’s not going to cut it. Or sitting down with these people trying to have a conversation and saying, well, let me try to change your mind a little bit. I appreciate the effort of people trying to do that, but I also understand that that it’s few tile. You are not going to change these people’s minds. You’re not, it’s not ever going to happen. So stop wasting your time and fight back and get angry and yell when it’s necessary because things are screwed up right now and they’re getting worse. They’re going to get worse. Trump is basically promising us, he’s going to make it so much worse. And I’m not going to sit there, sit here and try to act like I can win the day by just arguing calmly and collectively.

When I’m talking about policy issues, for the most part, it’s still going to be, you know what it usually is? I’m not going to start yelling about economy. Am I going to start, you know, screaming about healthcare. But when it comes to dealing with these people who has been says, and he’s again, 100% right, these rednecks that are racist, I’m going to get mad and I’m going to fight back and I’m going to call them names. And that’s just something that people are going to have to deal with because a lot of us are going to start doing it because we have hit our limit. They broke something within us on Wednesday night and they’re probably not going to be happy that they did.