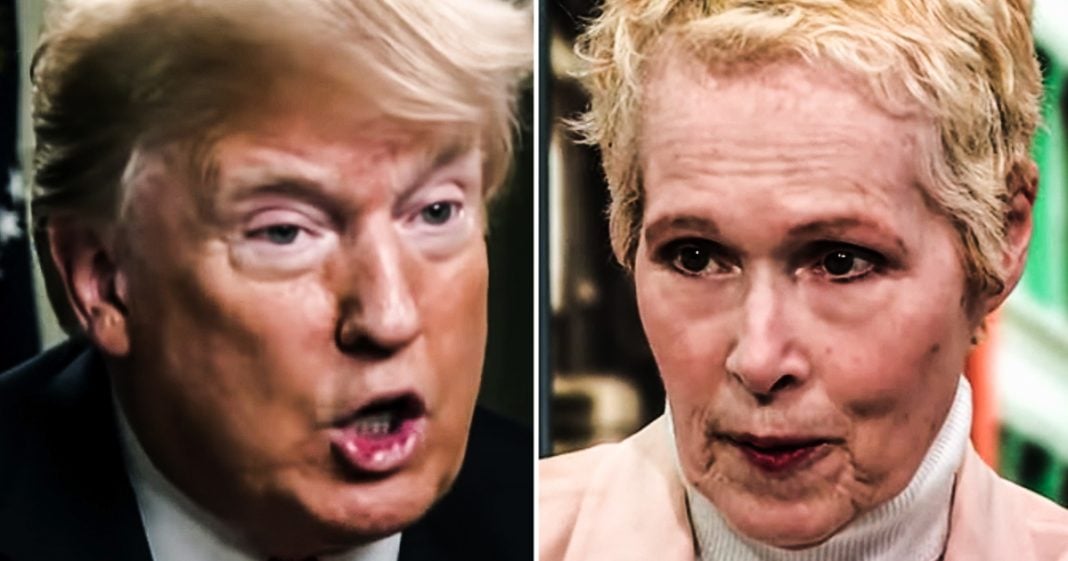 Writer E. Jean Carroll bravely came out recently saying that the future President of the United States, Donald Trump, sexually assaulted her in the 90’s. At the time, Carroll had only told a few close friends, but she felt the need to tell the nation after years of watching Trump trash the country. She has not ruled out legal action against the president, but as Ring of Fire’s Farron Cousins explains, that could be a major uphill battle.

Recently, writer E. Jean Carroll revealed that in the 1990s Donald Trump sexually assaulted her in a Bergdorf Goodman dressing room. Uh, you know, we’ve, we’ve seen the magazine cover where she, where she’s wearing the dress. She said, this is what I was wearing when Donald Trump assaulted me at the time she didn’t tell the authorities, but she did tell several of her close friends who did corroborate her story from the 90s now obviously this story should have been headline news all over the world and should still be, but it didn’t even pop that much when it was revealed.

And that’s disgusting. This is sickening. A woman, a credible woman, came forth and said, I was sexually assaulted by the current president of the United States back in the 1990s when he was just a sleazy New York businessman. And nobody thought that much of it. But now, and actually before I even get into the button now, when she came out with these accusations, she said, listen, I don’t want to, I don’t want to sue. I don’t want to press any kind of charges right now. Look, we’ve got so many problems, including the mistreatment of women all over this country, but especially down there at the border right now, that for me to go after this would be petty compared to what they’re going through. And that is a powerful, phenomenal statement. But now after a lot of people have come up to her and said, you have to pursue this, Ms. Carroll says that now she’s actually considering it.

Now she might seek legal action and she believes that if she gets a good enough lawyer, she might be over, uh, be able to overcome the statute of limitations issue, which earlier this year, the state of New York did, uh, expand their statute of limitations, giving people a little bit more time. But unfortunately, uh, Ms. Carroll’s situation would not apply to these new rules. They are very weird and specific and they were basically designed to help victims of Catholic church sex abuse, not all victims of sexual assault. That’s why they’re so weird. And you’ve, you know, you got till 55 to file the suit, you’ve got til 25 to file the criminal charges. It’s by age. And not by time after event. So just kinda clarifying that a little bit. But I think 100% that Miss Carroll should pursue this option and she’s obviously considering, she’s said obviously to the daily beast that she is considering it and I got to tell you, there’s a lot of great lawyers in the state of New York who would, if anybody has a shot, these folks would be the ones to give it their best shot.

And I’m hoping that Ms Carroll goes this route because it’s not just about her, it’s about all of the other women who have come forward and said, Donald Trump did this to me. Donald Trump has done that to me. I want justice. It’s for every woman ever come forward with any accusations about any man, and been denied justice or told maybe you secretly wanted it. Maybe it’s because what you were wearing, maybe you shouldn’t have been the way that you are. Maybe you shouldn’t have drank so much. That’s what this case is about. It’s about all women. And Miss Carroll was very smart. She understands this. She knows this. That’s actually one of the reasons why she didn’t want to do it, because she felt almost petty going after her case. When you have so many women being abused in this country right now, and we need to be focusing on that very altruistic, but at the same time, this case could be the same thing. Donald Trump has been credibly accused of sexual assault by roughly two dozen women. Some of them say they’ve got video tape showing them, say they’ve got audio recordings, whatever it is. These women all deserve to be heard. They deserve their day in court, and Donald Trump’s certainly deserves to have the scrutiny on him and have the media finally pay real attention to all these women and what they have to say about what Trump has done to them.