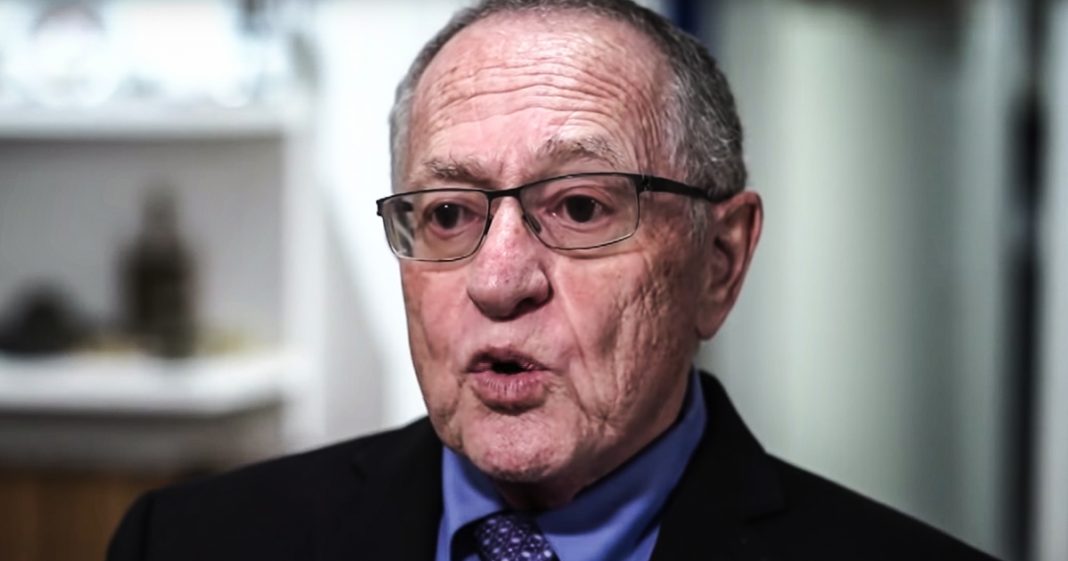 Harvard law professor Alan Dershowitz is not happy that reporters are looking into his past and talking to the women who allegedly had sex with him, and he lashed out by publishing an op-ed in Newsmax where he claimed that these baseless attacks are just an attempt to silence his support for Donald Trump and Netanyahu. This man is unhinged, and he can see the walls closing in around him. Ring of Fire’s Farron Cousins discusses this.

Harvard law professor Alan Dershowitz has been in the headlines a lot recently and a, it’s all been for reasons why you would never want to find yourself or anyone you care about in the headlines. Basically, Alan Dershowitz has been accused of having sex with underage girls while he was palling around with Jeffrey Epstein. Now Dershowitz has denied these allegations. He has not been charged. He has not been tried the, they are all allegations at the moment, but Dershowitz also understands that there’s more allegations about the hit the fan and he is freaking out right now and that’s why he took out an op-ed in a Newsmax conservative website to warn us that we as the public cannot believe a single word that any of these accusers have to say only believe good old Dershowitz. He tells us because everything else is a conspiracy to silence him. Specifically Dershowitz is freaked out about a coming New Yorker expose, a where they’ve gone out and they have talked to some of the women who say that yes, Alan Dershowitz was involved in the abuse. He abused me.

And Dershowitz’s out there saying, oh no, no, no, no, no, no, no, no. You’ve got to David Remnick who is the editor of the New Yorker, he’s got an agenda against me. Dershowitz us tells us in the shop-ed, he says he’s out to get me cause he wants to silence me because I am a defender of Donald Trump and a defender of Benjamin Netanyahu. And that’s why Remnick doesn’t like me. So he’s making up all this stuff. Here’s the problem. Dershowitz, you have no evidence whatsoever to back that up. And you’re a lawyer, you’re a law professor, you’re teaching people how to do law, and rule number one is you have to have evidence. You have to have evidence. But I’m assuming that’s why you went to Newsmax instead of, you know, maybe the New York Times or Wall Street Journal or Washington Post, something that actually has a little bit of credibility. But instead you’re like, now I’m going to post it on Newsmax. They love this kind of crap. I don’t have to cite any sources. I don’t have to link to anything. I don’t even have to prove anything. Hell, I can flat out make stuff up and these conservative websites will post it without a second thought, and that is what this is about.

But as I said, things are going to get very bad for Dershowitz. There are more women who are going to come forward. That is what this New Yorker piece is going to be all about. Dershowitz hung around with Epstein too many times. I mean, he already tried his defense earlier this week of I couldn’t have had sex with him. I had my underwear on the whole time and when that fell flat, now he’s saying, oh no, it’s all just a bunch of lies to silence my a defense of Donald Trump and Netanyahu. No, you’re a panicky old man who’s been doing dirty things to underage girls for years and you’re about to get busted for it. That’s why you’re panicking. If you knew the allegations were false, if you knew that these women were just full of it, you would have 100% filed a slander or libel lawsuit against them, or you would just brush it off saying, this is absolutely ridiculous. I have documents that prove it’s not true. Let’s move on and stop slandering me. But you’re not doing that. You’re publicly freaking out because you know you can’t defend it.