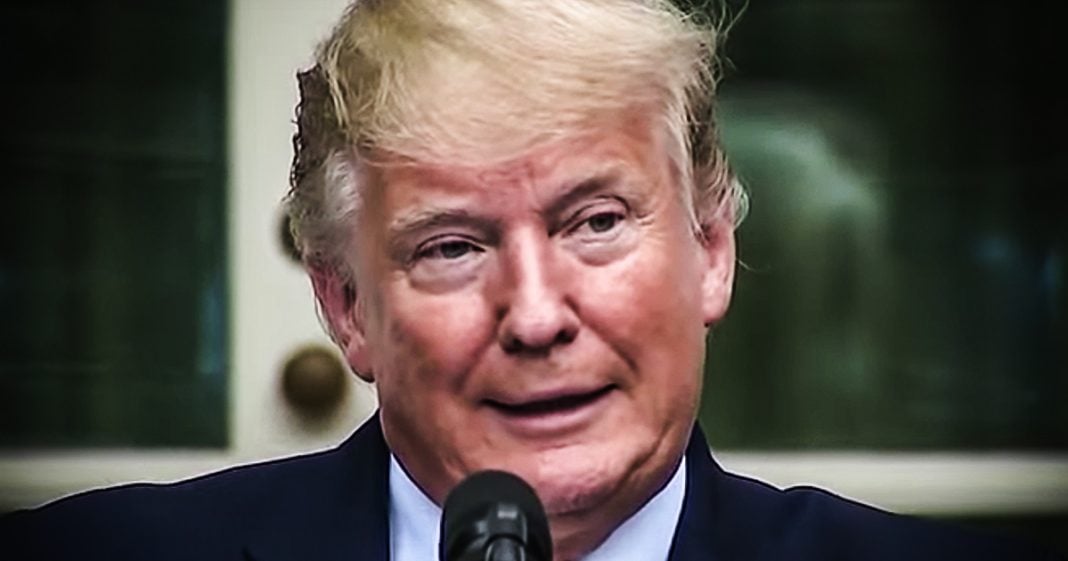 While most of America is still angry about Trump’s disgusting comments from this past Sunday, his hardcore supporters are loving every minute of it. They seem to enjoy watching the President make his xenophobic comments, and some even admitted to CBS News that this is why they voted for him! This is what we’re up against in 2020, as Ring of Fire’s Farron Cousins explains.

You know, one of the most disturbing things that we’ve seen happen this week, uh, as a result of Donald Trump’s racist and xenophobic comments over the past. Well, at this point in the last few days, cause it wasn’t just the tweets on Sunday, he has doubled down on it, double down or on a press conference, triple down on it in subsequent tweets ever since the original one, he loves to say these horrible things. Go back to your country. You hate America. You love the bad guys. And there’s a reason Donald Trump keeps saying these things and no, it’s not because he wants Democrats to have to defend the squad. It’s because he knows that his base is eating it up and he knows that his base is eating it up because his base is actually out there telling reporters, we love this stuff. This is why we voted for him. In fact, ed O’Keefe had CBS news recently, earlier this week, went out and talked to a bunch of Trump supporters to ask them how they felt about Donald Trump’s comments. And here’s what a few of them had to say.

This is Mary Lou Kohlhofer, retired business woman, who said,

“I know some people don’t like his tweets and they think he’s crass. I — that’s why I voted for him,”

Nancy Schneider had this to say,

My apologies, Nancy Schneider. I have no idea if that’s how you actually talk. There was no video attached to this. This was just words, but I imagine if this is the kind of nonsense you’re spewing out of your mouth, then you probably sign it with a little bit of an action not to. I’d reckon that higher you, and you know what? I feel no qualms about mocking these people are making fun of these people are or are using the weird voices on them because these are pieces of human garbage. Let’s be honest, I’m not going to dance around this issue anymore. I’m not going to play nice. I’m not going to act like well, I need to be a little more reserved and just say things in our respectful manner. Hell No. You see the crap these people are out there spewing. You see the man that they are defending in the comments that he have made that these they, they say like, yeah, hell yeah. Hell yeah. I love that. And you expect us to sit here with the little bit of decorum and rationally true. There’s no rationality anymore, folks. It doesn’t exist when you’re talking to or about these MAGA hat wearing fools and that is exactly what they are. These are fools, but more importantly, this is the kind of crap that we’re up against in 2020 how do you change a voter’s mind like that? The answer is you don’t. The answer is you write them off, you write them off.

And unfortunately, I don’t think enough Democratic candidates doing that. I think they think they can still reach these people. There are plenty of people in this country who support Donald Trump who are, who, who support the Republican party that you can reach. There are plenty. These people are not it. These are his base. These are the people who voted for Trump because he said he was going to kick the Brown people out and that’s why they voted for him and you’re never going to get them on your side. It doesn’t matter how to the much to the center, you go and say, oh, let’s have rational conversations with these racists. You don’t change your racist mind through rational conversations because there’s no rational thinking in that person. Life experiences help change people’s minds. It’s not something you can have in a conversation.

There are plenty of people to have conversations with and help change their minds and show them a better way, but these people ain’t it folks. These people need real world, real life experiences to help change their views. If it’s even possible, maybe for once in your life, go outside the borders of the United States. See different cultures maybe spend some times, make a new friend that doesn’t have lily white skin. She thinks from their perspective, that’s how you change these people’s minds if it’s even possible. Most of them, I don’t think it’s possible they were born and bred this way and they’re always going to be that way, but I’m done being nice. I’m done trying to act like we have to be nice to these people or that we can’t make fun of them and we can’t mock them or somehow that makes me less professional. These are horrible human beings and part of my job is to call out when somebody is a horrible human being and the defenses that they’re offering for the president of the United States saying, this is why I voted for him. We have to take our country back. Yeah. That’s just about as deplorable as you can get.